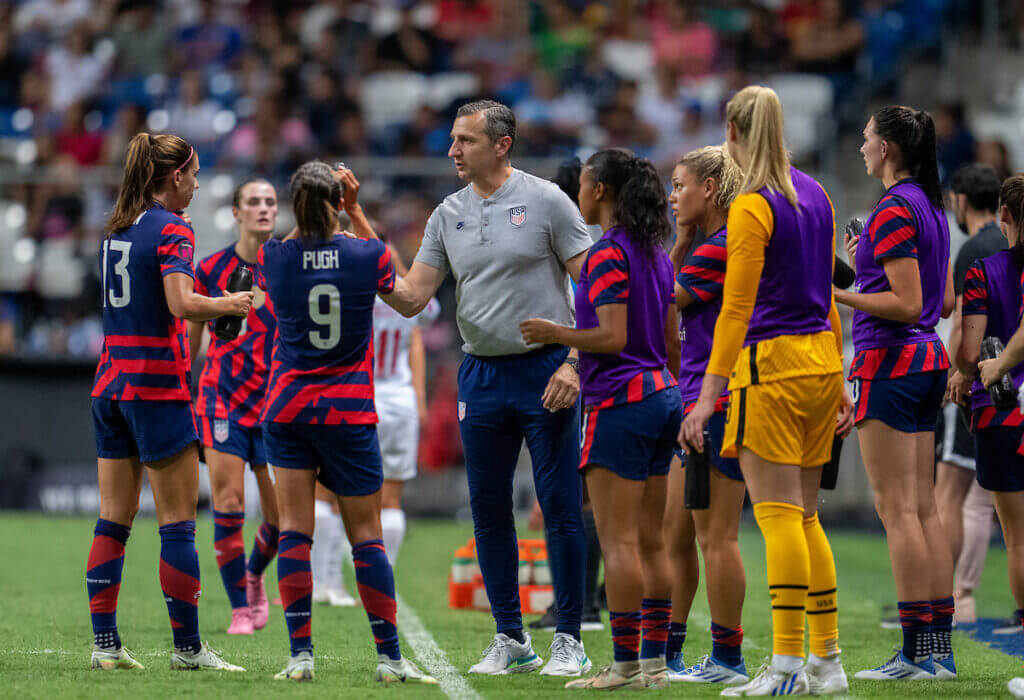 The U.S. women’s national team has qualified for the 2023 World Cup and the 2024 Olympics through CONCACAF qualifying, after a grinding 1-0 win over Canada thanks to a second-half penalty. But even though they outscored their opponents 13-0 over five games and allowed zero goals against in the tournament, there’s been some consternation among fans about the U.S. perhaps underperforming or not being World Cup ready,

It’s true that there was some room for improvement in the early stages of the tournament; the United States should have created more opportunities to score vs. Haiti (though that squad is much-improved and refused to be bullied back into their own defensive third). And questions remain about personnel, from the optimal center back pairing, to midfield arrangements, to getting all the forwards on the same cadence. Some of these problems can be solved with time and practice – they’re not fundamental structural issues that will require something like a complete tactical rework. In fact, a lot of the tactical decisions in the tournament were fine, but lacking in the actual execution.

That being said, the start of World Cup prep proper is as good a reason as any to take stock of how the USWNT has evolved under Andonovski’s tenure so far, position by position.

There is an overarching positive takeaway right off the jump: new faces. Between the players Andonovski has debuted and players he’s given a second chance to impress, the USWNT has looked fairly dynamic transitioning out of the 2019 generation and into the 2023 generation. Even with the younger players, through judicious use of friendlies they should be headed into the World Cup with a good foundation for playing with the full senior team, should they be chosen.

Let’s look at the 15 players who got their first caps under Andonovski, who took over officially on October 28, 2019:

And these are players who, while they got their first cap prior to Andonovski, either got a lot of their senior team development under him or were brought back into the fold in the Andonovski era:

That’s 20 players between the two categories, nearly a full squad in and of itself. Of the players listed, quite a few should be in serious contention for the World Cup roster, based on recent playing time. In fact, many are probably as close to locks as one can be this far out, barring injury.

Andonovski and staff clearly aren’t throwing darts at a dartboard to see what sticks, given how many of his choices have been solidly integrated into the roster over time as key players, either starting or working as big impact subs. I think it’s fair to argue that he and his staff have a decent eye for talent evaluation, and also deserve credit for taking NWSL performances seriously. With that talent evaluation, Andonovski has gone 41-3-6 so far in his career as head coach. Ten of the 15 players that Andonovski has capped came after the Olympics as well, perhaps indicating a bigger lean towards retooling the roster in this gap compared to the gap between Andonovski starting in 2019 and the Olympics in 2021 – a gap that was made unpredictable and complicated due to COVID-19, and also didn’t have to address various injuries, absences, and retirements from players like Julie Ertz, Crystal Dunn, Sam Mewis, Lynn Williams, and Carli Lloyd.

Sophia Smith and Mal Pugh are clearly this team’s first-choice wingers right now after years of looking to players like Megan Rapinoe and Tobin Heath. Smith and Pugh started four out of five qualifiers together, and probably would have played more were it not necessary to manage minutes in the heat and also keep to minutes restrictions while these players are in the middle of their club seasons.

Ashley Hatch and Trinity Rodman are strong sub options; Rodman in particular should be aimed at an eventual starting spot. She didn’t get a ton of time during qualifiers, but given her incredible rookie season, during which she frequently dealt with back injury issues, the WNT still taking it easy on her minutes is fine. Rodman will get plenty more bites at the apple in upcoming friendlies – there are three more FIFA windows in 2022 alone – and given that she and Hatch are both in heavy rotation for the Washington Spirit, there’s plenty of data available to keep U.S. staff in the know.

Andi Sullivan and a healthy Catarina Macario are both must-have players here. Andonovski himself told the media during CONCACAF qualifying before playing Jamaica, “If Cat does as well as we think she can then we’ll have to find a spot for her somewhere around.”

Andonovski said this in the context of making it clear that no matter how well Alex Morgan plays at striker, an in-form Macario has a place on the roster – not too hard to arrange given that Macario can also play from the midfield. Ashley Sanchez has also very, very quickly made a case for herself as a versatile midfielder upon whom the team relies for creative attacking solutions.

Sullivan is another must; while she was in the mix during the Ellis years, under Andonovski she’s become a core player to the tune of 10 caps in 2022 (out of 12 NT games played so far this year) as heir apparent to Julie Ertz. That’s not to suggest Sullivan is a one-to-one replacement for Ertz, whose workrate was the million-horsepower engine of the midfield, but Sullivan’s own abilities at defensive midfield in being able to intelligently cover the space and enable other midfielders, usually Lindsey Horan, to progress the ball,  have allowed the United States to adjust to missing someone like Ertz.

Kristie Mewis is an interesting conundrum, perhaps one of the bigger question marks if it comes down to having to trim one player off the roster. It’s clear Andonovski wants to find some use for her even if it means sticking her into a deeper midfield role, but she’s obviously more comfortable playing higher up the field, perhaps acting as a sub for Rose Lavelle. But she’s also one of the best set piece takers on the team and if Megan Rapinoe is only going to have limited minutes from here on out, that could be a factor.

Center backs Alana Cook and Naomi Girma are the future of this team. Of course, Tierna Davidson will eventually be in consideration as well; she tore her ACL in March, so even with a longer recovery timeline, there’s still plenty of runway to see if she should be on the roster. But right now, Girma especially looks like a future back line leader who can be trusted to anchor a defense while also cycling a ball out of the back. At times she looks as though she’s been playing center back for the San Diego Wave for years, and not at all like a rookie.

Out wide, Emily Fox and Sofia Huerta add crucial fullback depth behind Kelley O’Hara and, eventually, Crystal Dunn. Fox definitely helps add to the intense attacking fullback workload this team often asks for. Huerta is also excellent in the attack, but may find herself more in the middle of the roster depth due to less strength on the defensive side of the ball. That still makes her a great option when looking at a team that doesn’t have the greatest ability to play in behind or isn’t expected to work the transition that much.

Casey Murphy got a huge chunk of time during World Cup qualifiers but that felt more about getting her reps in goal than it was about GK pecking order. Alyssa Naeher is probably still the No. 1 foreseeable future and both Murphy and Aubrey Kingsbury are looking off-peak in NWSL play. AD Franch and Jane Campbell might still be considerations – Franch in particular has been absolutely sizzling hot for the KC Current – keeping the GK pool a nice size for now.

Overall, the USWNT is undefeated in 2022. Some teams they faced were stronger competition than others, and they’ve certainly struggled at times. But should the team be held to the standard of looking World-Cup sharp when they’re not anywhere near a World Cup? Isn’t there room for some mess, some dull games, some adjustment to the reality that these players are coming back and forth from their clubs during FIFA windows? Some of their harder moments during CONCACAF qualifying are just as much about giving credit to stronger opponents as they are about the team’s own issues; Mexico put up the fight of their lives in a game where they had immense pressure and motivation to win, and the current iteration of Canada is a mulishly stubborn defensive team, the equivalent of a 150-pound dog who has decided the walk is over. You can get them where you want to go but only with a lot of undignified tugging, heaving, and grunting.

There is some room for optimism just looking at the personnel poised to make a huge difference in the World Cup. Not necessarily the veterans, though they will certainly be expected to perform, but the Sophia Smiths and Ashley Sanchezes, the Naomi Girmas and Trinity Rodmans. As Andonovski and several players pointed out in the media calls around the game against Canada, it didn’t really feel like a “revenge” game from the Olympics because nearly 60% of the roster was different from that tournament to this one.

Smith told media after that final against Canada, “I feel good. I feel like I’ve really grown into this tournament, I feel like I have grown confident and secure in my role on this team and how I can help this team. I mean, obviously, there’s a lot of room to grow. This is my very first big tournament, I’m still very young and have a lot to learn.”

It’s an indication the balance between relying on veterans and letting younger players play free is having the desired effect, getting everyone adjusted to each other and able to define their role.