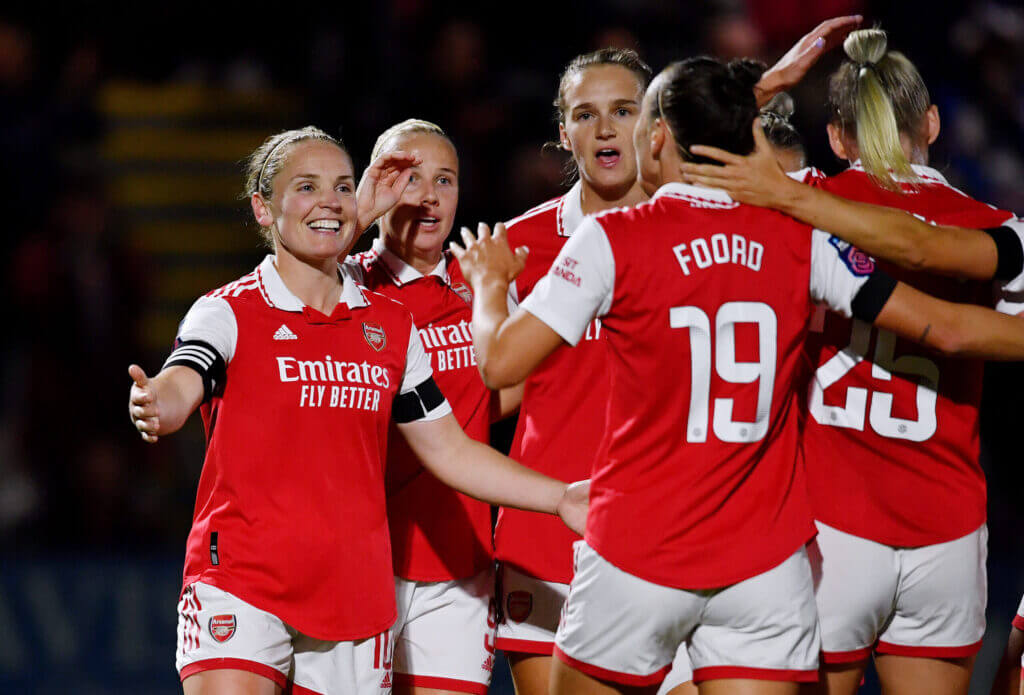 Jonas Eidevall had a lot of work to do in a short period of time to ensure Arsenal made a strong start to their Women’s Super League last season.

He was at Rosengard until July and having key players at the Olympics left little time to truly gel, yet they were explosive out the blocks, beating Chelsea 3-2 at Emirates Stadium.

Before this season’s opener, much of the groundwork had been done, and that showed in their 4-0 win over Brighton & Hove Albion at a packed Meadow Park.

“From February onwards I feel like we have stability in our performances which comes from stability in the way that we play,” Eidevall said.

“Maybe that makes us predictable but it also makes it easier for us to execute in a good way and to move the ball in the right way, so we are very happy with that.”

Arsenal may have only signed one outfield player this summer (Lina Hurtig from Juventus), but their starting XI represented the stability that has only grown since the spring.

All Eidevall’s starters against Brighton were in north London last season and three (Stina Blackstenius, Rafaelle Souza and Laura Wienroither) were January signings who have settled and embody the continuity that connects the back-end of last season to the start of this one.

The side set up similarly to how they did in the second half of last season, with Vivianne Miedema floating as a No 10 behind Blackstenius, who leads the line. That partnership reignited Arsenal’s title challenge last term, with Miedema finding space to create between the lines, Blackstenius able to stretch defences and Beth Mead exploiting spaces the Swedish forward vacated.

Within seven minutes of the new season, those movements had Blackstenius bearing down on goal only to be tripped by Emma Kullberg, who was sent off. Miedema showed her class in that pocket of space throughout, choosing when to drive forward or release others well, but it was Mead’s lay-off which finally claimed an assist when the forward fired in just after half time.

“It’s something I really have been working on in the last few years, to give my team-mates as much space as possible. It’s not like I want to have the ball every time just to (have it). If I can give one more second to another player, I’m happy with that,” Blackstenius said on the on-pitch relationships she has built at Arsenal.

“The play is very quick in England and maybe I need to have a better first touch to get the small touches and passes between me and Viv because I don’t have so much time with the ball, so that’s something I need to work on.”

Adding Caitlin Foord, one of seven players to extend their contracts this summer, to the mix only strengthens Arsenal. Like Blackstenius, she enjoyed a strong second half of last term with all seven of her goal involvements, four goals and three assists, coming after she was allowed to spend some time back in Australia following the Asia Cup. Starting on the left, she was the outlier compared to those aforementioned attackers who provide unstoppable excellence in their predictability.

While the game was still goalless, it was her dribbling that took Arsenal to their next level. Able to drive inside and out, she created three chances in as many minutes and deserved the assist she got when cutting back for Kim Little’s opener.

The first goal of the @BarclaysWSL season… scored by Kim Little! 👏 pic.twitter.com/d6XbCv8f8c

As much as Arsenal impressed on the ball, their stability was evident without it. When Brighton tried to build up from the back, Miedema would push up alongside Blackstenius to make the defensive shape more of a 4-4-2 rather than the 4-2-3-1 it looked like in possession.

This press was aggressive from start to finish. If the first line was not able to regain possession or force a pass out of play, Little stepped up to pick off any passes made into the Brighton midfield. If the visitors decided to go long, Rafaelle was proactive in meeting the ball to quickly regain possession and keep Arsenal in control.

Alongside this, the numbers with which they counter-pressed after losing possession, between two-four players, was imperative to maintaining control. That was something they struggled to cope with in the Champions League last season, and Eidevall made a point of wanting to train against Arsenal’s academy boys to improve that for this season.

It is something that still seems to be in its infancy, yet appears to be helping.

“We managed to play a game behind closed doors against the under-15s, which was beneficial for us,” the 39-year-old said. “It was also very good to connect with our academy coaches on the men’s side. That (is something) we’re now looking to see if we can do on more occasions, we just have to find the forums for it. Whether it’s a game or a practice, but for us that will decrease the time and space we have so that we have to improve our positioning and decision making. That is undeniable.

“It’s all about reactions and positioning. What is recognisable with the way we play is we are so much better at always having players behind the ball when we play the ball forward so if the play breaks down, we can commit.

“For us to develop as a team, that positioning needs to be spot on every time so we build that foundation. We’ve been doing that much more since last spring.”

Arsenal looked comfortable against Brighton and not just because they were a player up. They stuck to the standards and principles that became clear last season and have been built upon since, which kept them in the driver’s seat.

Ensuring those standards do not slip will be key as they look to wrestle the WSL title from Chelsea.

(Main image: Little celebrates with her team-mates after scoring the opener. Photo: Tom Dulat – The FA/The