Home NEWS As Cubs continue to rebuild, Kris Bryant’s year with the Rockies has not gone to plan

As Cubs continue to rebuild, Kris Bryant’s year with the Rockies has not gone to plan

CHICAGO — It felt like an event when Kris Bryant returned to Wrigley Field as a Giant last September. Cubs fans were still processing Jed Hoyer’s furious sell-off before the July trade deadline, which yielded eight trades in 16 days and signaled the end of a golden era on Chicago’s North Side. The Giants represented hopes for another stunning turnaround, mixing veteran players from World Series teams, a progressive coaching staff and an opportunistic approach to the 40-man roster. The Dodgers kept the pressure on the Giants in a neck-and-neck race in the National League West. The intrigue also extended to Bryant’s impending free agency.

After winning 107 games and losing to the Dodgers in the playoffs, would the Giants go all in with Bryant to rationalize giving up two good prospects in that deal with the Cubs? If not San Francisco, which cities would appeal to Bryant’s family and their home base in Las Vegas? After years of trade rumors and nagging injuries, how would agent Scott Boras market a former MVP and deliver the long-term security his client desired?

The vibes felt much different when Bryant sat down in the visiting dugout before Friday afternoon’s game at Wrigley Field. The questions weren’t as pointed or asked with the same sense of urgency. He wore a black Rockies T-shirt and a black Rockies hat with a purple bill. His eyes were shielded by sunglasses with a purplish tint to the lenses. His name wasn’t in Colorado’s lineup for this matinee featuring two teams that are 40 games under .500 combined. 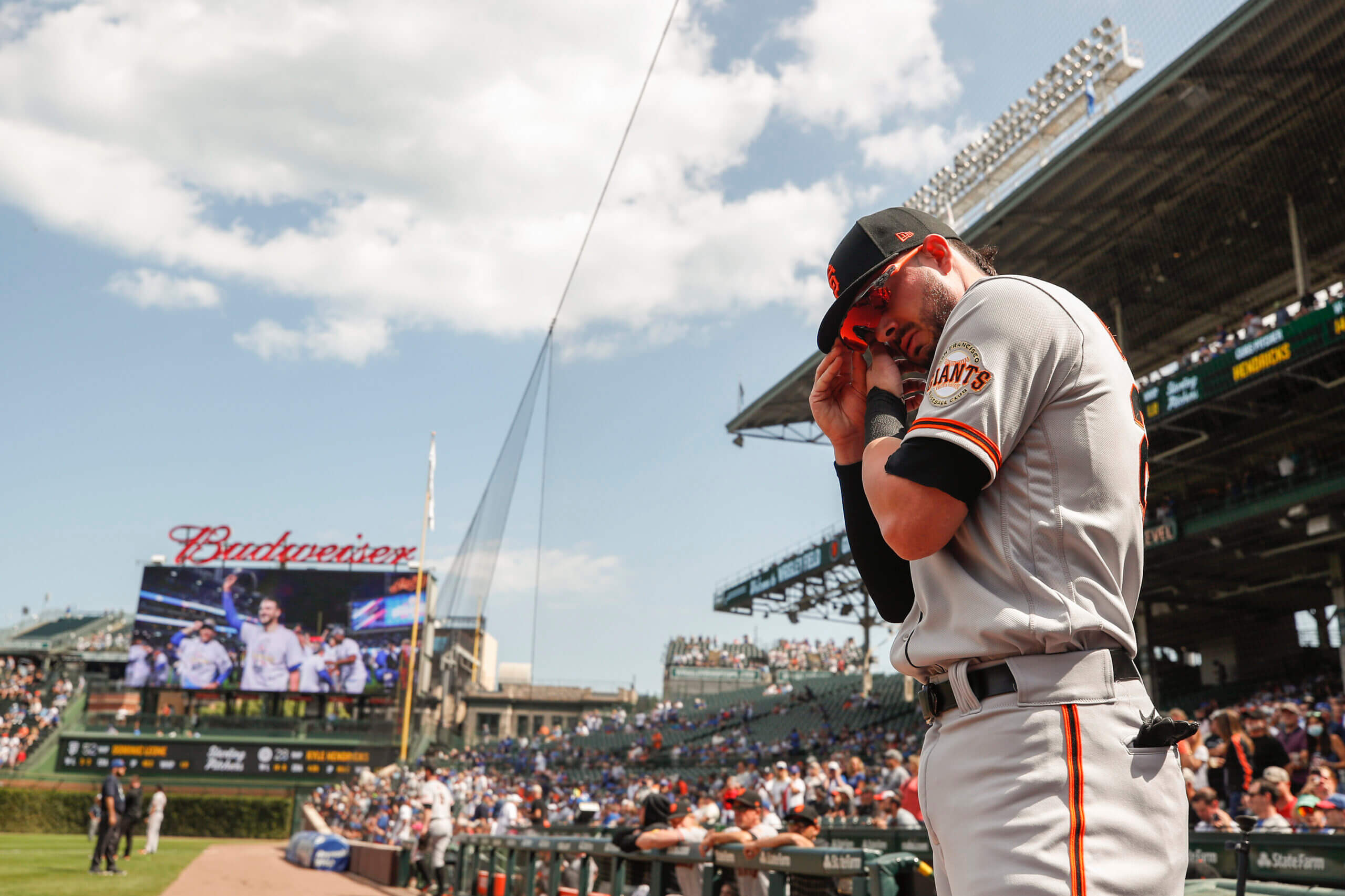 Kris Bryant’s return to Wrigley Field after being traded in 2021 was an emotional affair. (Kamil Krzaczynski / USA Today)

In the first season of a seven-year, $182 million contract, Bryant has played in only 42 games for the Rockies, needing three separate stints on the injured list for a strained lower back and plantar fasciitis in his left foot. In the NL West, Colorado hasn’t matched the sustained excellence at Dodger Stadium or the star power in San Diego. The Giants have more resources than the Rockies, and the Diamondbacks might have a better base of young talent.

The Cubs haven’t turned the corner, either, identifying a few building blocks for the future, letting their prospects develop in the minors and signaling their intentions to spend like a big-market team again this winter after years of cost-cutting measures. But it will be impossible to re-create the perfect storm at the beginning of Bryant’s career, when he went from the No. 2 pick in the 2013 MLB Draft to the consensus minor-league player of the year in 2014 to the rookie of the year on a 97-win team to the MVP of the team that ended a 108-year World Series drought.

“I love playing here,” Bryant said. “It’s a great place to hit. It looks like the wind will be blowing out for three days in a row. I told all the guys that I checked for them before we got here: Hit the ball in the air. But it’s definitely fun to play here. Wrigley Field is a very historic place. So, yeah, there is a little bit of disappointment there.

“I remember talking to John Lackey when he was here; I think it was 2019 when he came back. He told me: ‘You’re not going to have a great year every year. You’re not going to be healthy every year. That means you’ve played the game for a long time.’ I really took that to heart when he talked to me then. You just realize that when you’re playing the game for a while, everything can’t be perfect every year, which sucks, but it happens.”

At this point, Bryant said the Rockies haven’t decided to shut him down, though it’s hard to believe they would rush him back with less than three weeks remaining in a lost season. He hasn’t played in a game since July 31, but he has started ramping up his baseball activities again. When healthy this season, he has demonstrated his All-Star talents, hitting .306 with an .851 OPS in 181 plate appearances. He will be 31 next year.

“I think they just really want me to feel really good going into the offseason,” Bryant said, referencing the unusual circumstances of the last two offseasons between the COVID-19 pandemic and Major League Baseball’s lockout. “I’m just really hoping for an offseason that’s as close to normal as possible, so that’s kind of where my head is at right now.”

Bryant, who maintained a steady personality amid the adrenaline rush of 2016 and the frustrations from the team’s post-World Series crash, now appreciates the luxury of a full no-trade clause, knowing he will be part of a long-range plan in Denver. With Bryant sidelined and the Cubs organization in the thick of a rebuild, there weren’t the told-you-so, made-for-TV moments in Colorado’s 2-1 loss, which saw Cubs pitcher Marcus Stroman take a no-hitter into the sixth inning Friday at the Friendly Confines. Staying in character and drawing upon his experiences in Wrigleyville, Bryant downplayed the idea of feeling the weight of having to live up to that huge contract with the Rockies.

“I feel like I generally handle things pretty well,” Bryant said. “Playing here helped me handle certain expectations and pressures that this game brings, and I’m definitely using that throughout the whole year. It’s been a weird year for me, starting all the way back in November when things kind of shut down, and then finding a team really quick, and then being hurt and having twins. Just a lot of life changes. But everybody here has been unbelievably supportive. I haven’t gotten on the field much. But just to salvage some really, really good relationships here is going to help me in the future because I’m going to be here a while.”