As Xander Bogaerts chases a batting title, he further cements his place in Red Sox history 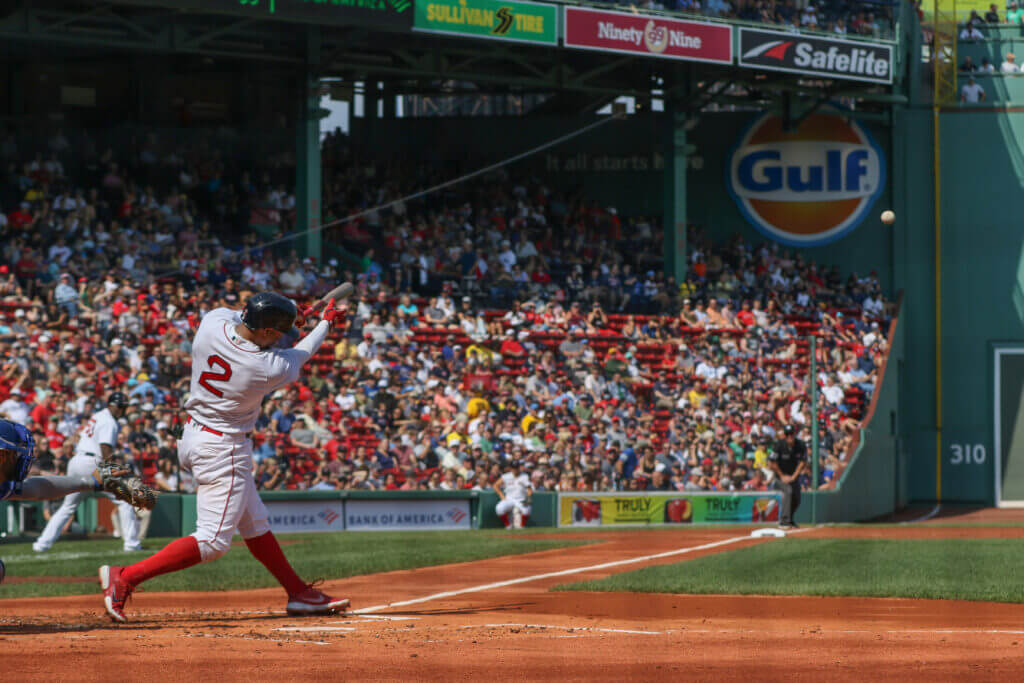 BOSTON — A familiar ritual played out again Sunday. Xander Bogaerts stood postgame in the Red Sox clubhouse talking about another milestone added to this resume, and this time he did his best to think ahead to the next time such a gathering would be necessary.

“I know the doubles thing,” he said. “I’m a couple of doubles away from, I don’t know, some other thing.”

What’s funny is, he might have been talking about another milestone he’d reached that very day.

Most of the attention after Sunday’s 13-3 win against the Royals was on Bogaerts achieving 1,400 career hits. He was only the fourth Red Sox player to ever do so before his 30th birthday, and the other three become Hall of Famers: Carl Yastrzemski, Bobby Doerr and Jim Rice.

“All three of them are much better players than me,” Bogaerts said.

But Bogaerts reached that round number with an RBI double in the first inning, and that double was No. 308 in his career, moving him into a tie with Dom DiMaggio for ninth most in Red Sox history. So, was Bogaerts referring to that little sliver of history? Or the fact he’s four away from tying Yaz for the most Red Sox doubles before turning 30? Or maybe the fact he’s now tied with Doerr for the franchise’s fourth-most extra-base hits before turning 30?

“It’s special, you know, when you reach stuff like that,” Bogaerts said. “Most of the time I don’t know about stuff until someone comes up and tells me about it, then I’m like, oh, OK, now I’m aware.”

He’s been made aware of a lot of things this year. In June, he became the Red Sox’s all-time leader in games started at shortstop. In August, he became the eighth player in franchise history to have 300 doubles and 150 home runs.

“I looked at one up there (on the video board during the game),” manager Alex Cora said. “It was him and Alex Rodriguez. It was 150 homers (and 300 doubles), the only two (shortstops) in the history of the game before they turned 30.”

“And Alex was a really good player,” he said.

Bogaerts, too, has become a really good player, and one whose accomplishments come without need of an asterisk. The only thing looming over his accomplishments these days is the sense of pending finality. With 16 games left in the regular season — only seven at home — Bogaerts is solidifying his place in Red Sox history even as he marches almost inevitably toward free agency.

“I know I’ll get to a point where, once I start getting closer — being more realistic, from five to four to three to one more — it’s going to get to you,” Bogaerts said. “We end the season at home, right? So, that’s going to be an interesting homestand for me. I just take it day by day and try to stay really focused on the job that I have to do.”

In a radio interview last week, Bogaerts acknowledged “stuff might get a little emotional” in the final weeks, but for now he’s locked in on the task at hand. Ever since some late-season frustration erupted on August 19 and Bogaerts was ejected from a game for the first time in four years, he’s played inspired baseball, raising his batting average 13 points so that he’s now second in the race for the American League batting title. His .316 is just percentage points below Luis Arraez’s .317.

“When I got thrown out, that felt great,” Bogaerts said. “That was probably one of the turning points. … I’m not a guy who gets thrown out a lot, but that felt really good. Just felt like a lot of stuff was off my shoulders. It felt good again.”

Rather than dwelling on the Red Sox being in last place, or focusing on the personal uncertainty ahead, Bogaerts said he’s been motivated by the opportunity to win a batting title. He finished second in 2015, and he’s finished seventh or eighth each of the past three years. The opportunity to finally win one is spurring a hot streak at the right time.

“Yeah, it is,” Bogaerts said. “I’m not going to sit here and lie to you. If it happens, it happens. If it don’t, it don’t. But I’m aware of it. A couple of weeks back, I wasn’t really in the conversation, but I’m that guy since I put myself in it. It’s something that’s in reach. I feel like I just try to get more locked in and I’m going to try to go for it. That’s how I’ve always been.”

How he’s always been. Those words might be as meaningful as any because 29-year-olds don’t reach these numbers without being a constant presence, as Bogaerts has been since he arrived for the stretch run of 2013 to become a defining player of this Red Sox era.

“Every team I’ve ever been on that’s come in here and played against him, we’ve always talked about how he doesn’t get talked about enough (and) how good of a player he is,” Eric Hosmer said. “He’s got two championships under his belt. He’s doing it here in Boston. So, he’s a guy that everyone in the league definitely admires from afar.”

So, what’s struck Hosmer after seeing Bogaerts up close, day after day?

“The consistency is something that stands out for me as being incredible to watch,” he said.

And he wasn’t alone.

“The consistency that he shows every single day,” Nick Pivetta said. “I’ve learned a lot, but also, it’s really fun to watch, and it’s encouraging. He works really hard and does the little things right.”

Perhaps no one knows that as well as his manager.

“I always said, he’s the most consistent person in this organization,” Cora said.

That might be the case for another 16 days. It’s funny, Bogaerts said, perspective came to him on Sunday not when he reached another milestone, but when one of the umpires told him that he’d first umpired a game with Bogaerts in the Dominican Summer League way back in 2010.

“It’s crazy,” Bogaerts said. “I still feel great. I feel in good shape. I feel young. Hopefully I can do this for a long time.”