Bengals camp observations: Cam Taylor-Britt’s striking tough get started in the back of him

CINCINNATI — Bengals rookie cornerback Cam Taylor-Britt wasn’t letting some rough practices in training camp get him down. But he also wasn’t about to downplay his big day Friday, when he had an acrobatic pass breakup and a handful of other impressive reps in coverage.

“Honestly, that’s just the start of something,” Taylor-Britt said prior to Sunday’s practice. “I feel like once you actually get out there and things start going good, everything will come good after that. You just have to stick to your routine and keep doing it every day and you’ll improve.”

The former Nebraska Cornhusker had back-to-back disappointing practices Tuesday and Thursday, when he was beaten repeatedly in one-on-one drills. After Tuesday’s session, Taylor-Britt found himself playing behind undrafted rookie Allan George while starting cornerback Eli Apple was sitting out.

“I didn’t take it hard,” Taylor-Britt said. “I feel like everybody needs an opportunity. (George) got his opportunity. Once I get out there, I have mine. I feel like, right now, it doesn’t matter where you go in the group because everybody’s at the same level right now. You make a play when they come to you.”

The biggest play that came his way Thursday was on a deep corner route against Trent Taylor, when Taylor-Britt made a leaping stab at the pass and nearly hauled it in for a one-handed interception. It would be easy for a young player who had been struggling to view that play as a win, but Taylor-Britt said he views it as more of missed opportunity.

Apple returned to full participation in practice Sunday, taking all of the first-team reps. But with the Bengals expected to rest the bulk of their starters — if not all of them — in the preseason opener Friday night against the Cardinals, Taylor-Britt could see a handful of series.

“I dream about (it). I do dream about it a lot, especially now that it’s game week,” the rookie said. “I woke up this morning ready to go just knowing in a couple of days I’ll get to showcase my skills and help this team out.

“It’s very important to get out there and play around with my teammates. We’re actually in a game now, it’s not against our offense and points will be put up on both sides. But we’re going to try our best to stop that and be great.”

While many of his practice reps in the 11-on-11 and 7-on-7 sessions have been against the second-team offense, Taylor-Britt has found himself paired against some of the team’s best receivers in the one-on-one drills.

And while he’s come up on the wrong end of those most of the time, he views them the same as giving up a catch in a game.

“Have a short memory,” Taylor-Britt said. “We’re in the big leagues now. Somebody will catch a ball on you and you’re in a perfect place. You have to go back out there and it’s first down again and you have to go at that same person, so you’ve got to forget about that and move on.”

“Their techniques are crazy,” he added. “We have different wide receivers with speed, different routes and … they’ve faced many DBs other than (me) and I’m just a rookie here, so they just help me out any way they can. It is what it is, man. You have to get up there and put your best football forward. We do have some great wide receivers. It just (does) nothing but make me work on my technique and forgive and forget.” 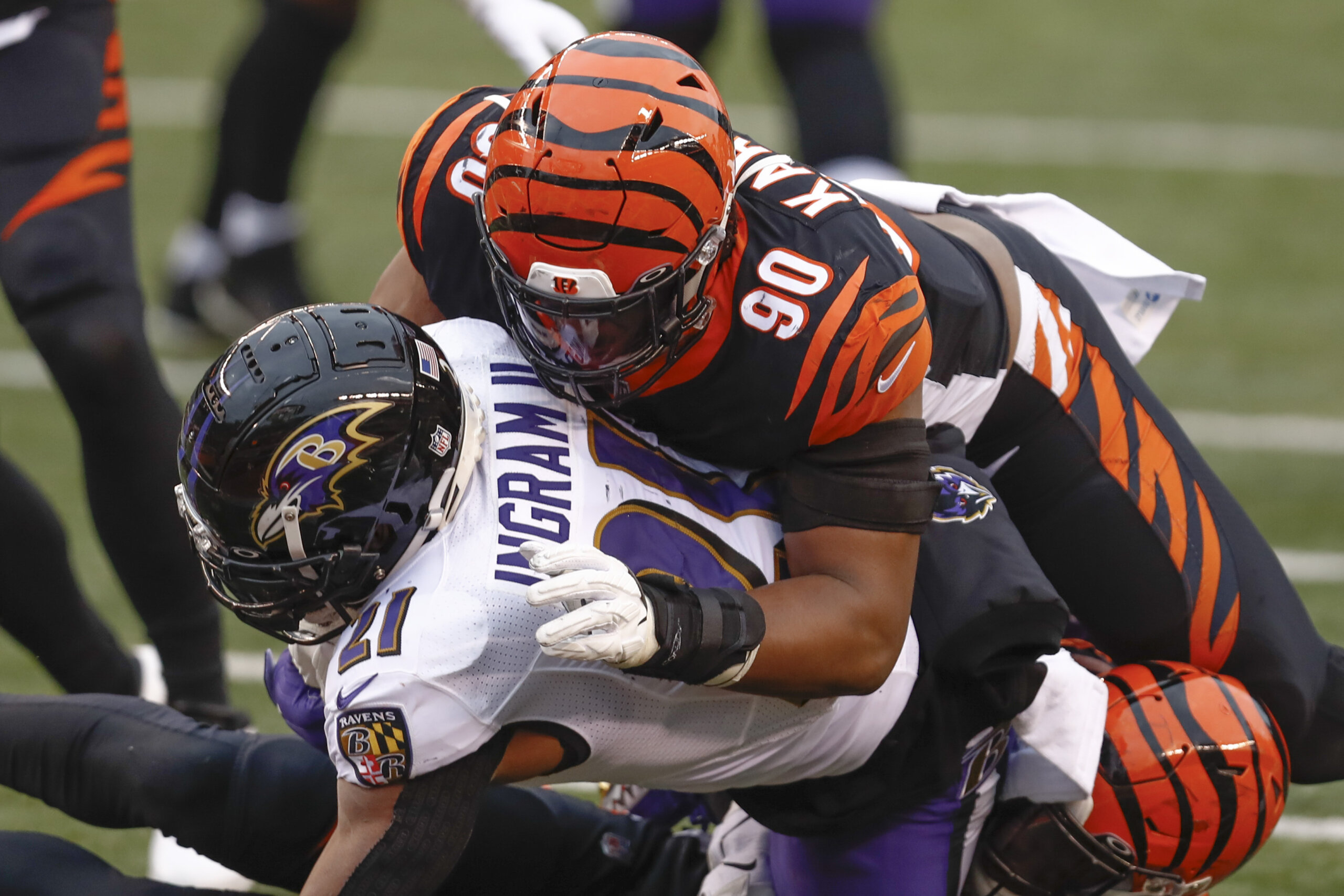 The Bengals activated Khalid Kareem from the physically unable to perform list Sunday, and the defensive end took part in individual drills.

“It feels good to be back out here with the guys,” he said. “It feels great, honestly. You can’t beat it.”

Kareem said offseason shoulder surgery was the reason for his absence in OTAs plus the first week and a half of camp. He tore his labrum on the third play of the preseason finale last year and went on injured reserve. He opted not to have season-ending surgery in favor of rest and rehab and returned to the field in Week 8 against the Jets.

In Week 15, Kareem made one of the biggest plays of the season when he ripped the ball free from Denver quarterback Drew Lock on second-and-goal from the 9, with the Bengals clinging to a 15-10 lead in the fourth quarter. Kareem took a shot while running the other way the ball — one that left him concussed and reaggravated the shoulder injury when landed on it.

“A little double whammy,” Kareem called it. “It had been feeling really good. I had full strength. But once I landed on it, it was a shot. I just bit down on every play and kept on pushing.”

He missed the next two games, then played in the regular-season finale, all three playoff games and Super Bowl LVI.

“Playing in the Super Bowl was a lifelong dream. I couldn’t miss that opportunity,” Kareem said.

He wouldn’t needed offseason surgery even had he not reinjured the shoulder against the Broncos. Nine days after the Super Bowl, he had the procedure done.

The 2020 fifth-round pick also missed OTAs and an early portion of training camp as a rookie due to left shoulder surgery, so this is the third year in a row he’s lost significant time due to injuries. But Kareem says he feels great and is ready to compete for a spot in a deep defensive line group.

“(Injuries) are part of the game,” he said. “You’ve got to take the bumps and bruises and keep on pushing. It’ll all be part of my story in the end.”

Wilcox in the wings

The knee injury that will keep Drew Sample sidelined for a couple of weeks creates an opening for Mitchell Wilcox, who played the third-most snaps on special teams last year but only 36 on offense (prior to the regular-season finale, when the Bengals rested all of their starters).

“It’s definitely an exciting opportunity,” Wilcox said. “The special-teams route has been my responsibility since I got here, and I’m looking to expand on that role.”

One of Wilcox’s best games back at South Florida came at Cincinnati in 2018, when he caught seven passes for 90 yards — including a diving, 38-yard touchdown in the Bulls’ 35-23 to the Bearcats.

As eager as he is to get more involved in the passing game after catching just three passes for 16 yards last year, Wilcox said the most exciting part is getting a chance to prove he can be a force in the run game at this level.

“Since I’ve been here, I’ve always tried to take steps in the right direction of being a better blocker,” he said. “I’ve had the capabilities of being a pass catcher and making plays down the field, but to be a dual-threat tight end in this league, you’ve got to block well and get nasty in the run game. I’ve tried to do my best to increase that role and their trust in me.”

Offensive lineman D’Ante Smith, who left Friday’s practice on a cart, was doing rehab work on the side field, along with right tackle La’el Collins (back). Also there were linebacker Joe Bachie (knee) and safety Brandon Wilson (knee), both of whom are on the PUP list.

Sample was at practice wearing a brace on his left knee, an injury that Taylor said will keep him out just a couple of weeks.