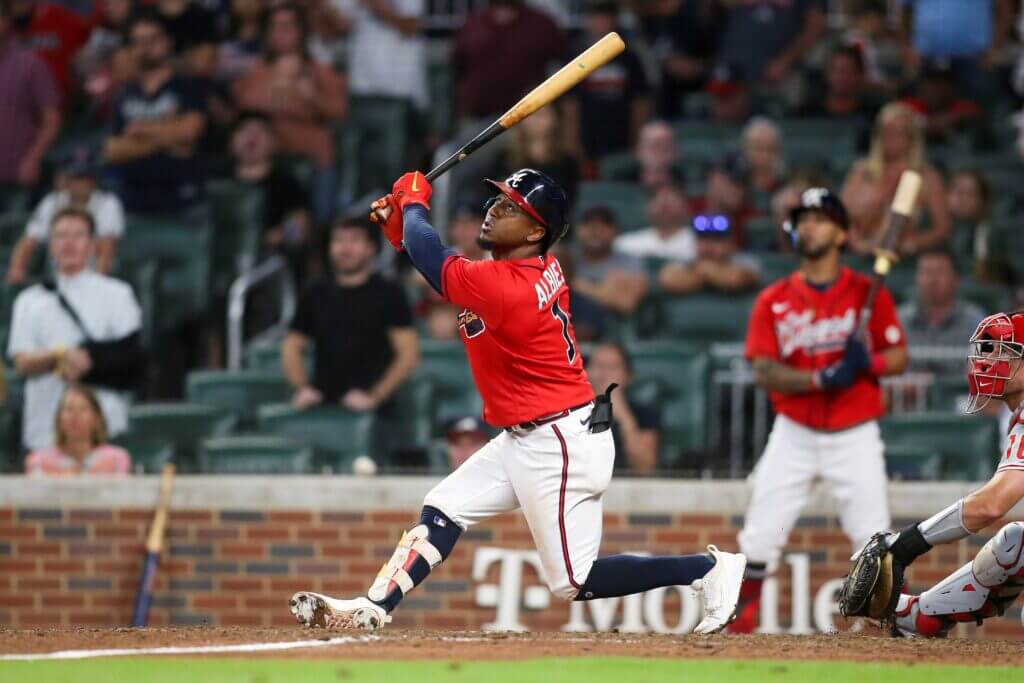 ATLANTA — Almost eight innings into the Braves’ 7-2 comeback win over the Phillies on Friday, in the midst of a six-run deluge, Ozzie Albies made his presence felt.

The Braves second baseman had mostly kept to the margins of what had been a tight rivalry game in the waning weeks of the season. Then he golfed a low-hanging changeup with his bat. The ball flew 203 feet the other way. It was not hit quite hard enough to do damage and extend an inning that had jolted the sellout crowd of 42,578 at Truist Park. But when three Phillies converged in no man’s land in shallow left field, somewhere, baseball’s gods laughed. The ball hit grass as left fielder Kyle Schwarber failed to come up with a play and Albies turned the jets on in his mad dash from home to second base.

Back in the dugout, with the roar of the fans blasting above him, Braves manager Brian Snitker welcomed the familiar image.

“There’s nothing better,” Snitker said later, after the Braves had secured their 89th victory and surpassed their 2021 win total, “than watching Ozzie’s helmet fly off.”

RT if you missed @ozzie losing his helmet pic.twitter.com/h8X2NsqIMX

The Braves had been without their second baseman’s exuberant style of play for more than three months. He fractured his left foot in the fifth inning of the Braves’ June 13 game against the Nationals in Washington, D.C. His teammates’ last image of Albies in a game uniform on the field was him planting his left foot on contact and falling to the dirt after turning to run toward first base. The 25-year-old had to hop on one foot to get to the dugout to be examined.

They much preferred replacing it with the memory of Albies’ gear falling off his head and the sound of fans chanting his name in the immediate aftermath.

“The energy that he brings to this club every day, it was definitely missed,” said starter Max Fried, who received no decision after giving up two runs and three walks in six innings. “Really happy to have him back.”

Ronald Acuña Jr., who kicked off the Braves’ outpouring in the eighth with a two-run blast to right field that gave his team a one-run lead, said in Spanish that the team “all missed him. He’s a player who plays hard, gives his 100 percent, 200 percent every time he goes out on the field. Always has the same passion. He’s a player worthy of admiration.”

The Braves believe Albies’ influence will extend beyond whatever he can produce with the lumber. Simply having him active appeared to inject some extra energy into the corner of the Braves clubhouse where the team’s biggest cut-ups reside. As he stood in front of cameras to take questions from reporters, reserve outfielder Guillermo Heredia held two microphones under Albies’ chin. Orlando Arcia, seated on Albies’ other side, lifted up one of his own. Albies, smiling, turned to Heredia and asked if he had a question.

Before succumbing to a guffaw, Heredia replied, “I like it.”

The Braves are a somewhat different team compared to the one for which Albies hit .244 with 33 RBIs across the first 62 games of the season. While Albies was out of the lineup, Eddie Rosario returned from eye surgery, his countryman Kenley Jansen missed playing time because of a recurring heart arrhythmia, Robinson Cano came and went, Adam Duvall had season-ending wrist surgery, Vaughn Grissom debuted and electrified the lineup like his friend and fellow rookie Michael Harris II a few months earlier, Ian Anderson lost his rotation spot and a plethora of other moves filled up the transaction log.

But some things about the squad remained the same during Albies’ absence. The Braves’ tenacity and confidence in their ability to defend their 2021 World Series title never vanished.

Albies watched from afar, often from his couch, as his team flourished. During the course of his three-month absence, the Braves assembled the second-best record in the sport (53-28). They scored 52 more runs than the rival Mets (363). They pitched just about as well as the division leaders, too. They even climbed into first place in the National League East.

But that reign atop the standings lasted only a day. Recapturing the division and clinching it could shift momentum as the Braves enter October chasing a second consecutive championship.

After a 9-for-27 showing in a rehab assignment that lasted seven games, Albies should be present for all of it, making the significance of his return all the greater.

“Amazing,” Albies said when asked before the game how it felt to return to a Braves team one game out of first place with 2 1/2 weeks to go. “Best feeling in the world because we’re right where we want to be. All we gotta do is keep playing hard.”

For all the pomp surrounding his comeback — the main Braves merchandise store unveiled a new Albies caricature tee; fans heartily applauded their erstwhile second baseman when he was the first player introduced during a pregame recognition of Latin American Braves players and coaches in honor of Hispanic Heritage Month; chants of “Ozzie!” slowly built in the stands behind home plate during his first plate appearance — Albies was quiet most of the night. He elicited a grateful round of applause when he ran down a fly ball lofted to shallow right field by Phillies catcher J.T. Realmuto in the second inning, a play in which he barely beat Acuña to the ball. Three innings later, he applied the tag on Bryson Stott’s attempt to steal second base.

But Albies came up empty in his first three trips to the plate. He barely muscled a ball into shallow right field to end his second at-bat, and he turned a high 99 mph heater from the Phillies’ José Alvarado into a hard groundball to close out the seventh inning.

Then came the eighth inning and a two-run double that served as a reminder.

“Ozzie has meant a lot to this place here and to our organization and our team,” Snitker said. “He’s been instrumental in a lot of really good things that have happened over the last five, six years. And fans appreciate the way that kid plays, because he leaves it out there every night. Like I always say, you play like Ozzie, you’re gonna do right.”

(Photo of Ozzie Albies hitting a two-run double in the eighth inning Friday against the Phillies: Brett Davis