DENVER — By the time the first half had ended Sunday, boos from the fans at Empower Field at Mile High were consistently raining down on a Broncos offense and a coaching staff that seemed lost.

But say this about the sold-crowd welcoming its team home for the first time in 2022: While fans might have been frustrated, they didn’t let that prevent them from offering a helping hand.

The scene took place in the fourth quarter of an eventual 16-9 win over the Texans, who have arguably the NFL’s least talented roster. After watching the Broncos struggle to efficiently move from the play-call to the huddle to the line of scrimmage, a group of fans began counting down the play clock.

The chants might have been some mix of derision and an earnest attempt to help a team bogged down Sunday by kinks in the communication pipeline. But lo and behold, coincidence or not, the Broncos finally did find a rhythm on two fourth-quarter scoring drives that secured the victory.

“I was telling them that actually helped us out,” running back Javonte Williams said with a laugh. “That’s when we started clicking, once they started telling us the play clock. I’m like, ‘They might need to keep doing that every game.’”

The Broncos can chuckle because there is no apologizing for wins in the NFL. On a day where three AFC teams with designs on playoff runs remained winless — Raiders, Colts and Bengals — the Broncos improved to 1-1 and avoided falling into the kind of 0-2 hole from which history says it is difficult to emerge. They did it on a day when they were missing their All-Pro safety in Justin Simmons and then lost two of their other best players, cornerback Pat Surtain and wide receiver Jerry Jeudy, to injuries in the first quarter.

“Winning is hard in this league,” linebacker Jonas Griffith said. “I think every win is a good one, no matter how you do it.”

True enough. But two games into a new era featuring quarterback Russell Wilson and first-year head coach Nathaniel Hackett, it’s clear the Broncos have significant issues to overcome if they are going to keep pace in arguably the NFL’s toughest division. The Broncos have not yet had to block Maxx Crosby or Chandler Jones or Joey Bosa. They haven’t had to game plan for Patrick Mahomes or Justin Herbert. Haven’t had to cover Davante Adams or Travis Kelce. Haven’t had to scheme against Andy Reid.

The AFC West is not a friendly place to be while you’re grappling with growing pains. Games against those division foes and their star-studded rosters are coming. A prime-time matchup with a talented and experienced 49ers roster next week comes first. The road only gets harder, and the self-inflicted errors the Broncos have been wholly unable to avoid at this early point in the season will only become more damaging as the schedule progresses.

Those mistakes Sunday included 13 penalties for 100 yards, a bad sequel to the 12-flag opener in Seattle. The Broncos finished Sunday with their most EPA (expected points added) lost by offensive penalties through the first two games of a season since at least 2000, according to TruMedia. The miscues included a bizarre sequence in the third quarter when the Broncos ran a tight-end run option play with tight end Andrew Beck on a third-and-1 at the Houston 35-yard line, lost a yard, sent out Brandon McManus for a 54-yard field goal and then picked up a delay-of-game penalty that led to a punt. The Broncos burned one timeout because they didn’t have a punt returner on the field on a fourth-and-14 play. They burned another when they couldn’t get the play in quick enough after a fourth-quarter sack of Wilson.

Hackett, who was derided after the Week 1 loss for his decision to send McManus out for a 64-yard field goal on fourth-and-five in the game’s final minute, called the breakdowns in communication that have led to a hurried operation “inexcusable.”

“We’re going to have to be sure we evaluate everything,” Hackett said. “It’s getting the personnel out there, or a lack thereof, and making sure the plays are coming in nice and clean, and just getting into the huddle and out of the huddle. So we’ve just got to keep talking about that. We’ll talk with Russ and find out anything that I can do to help him make it better.

“That’s inexcusable. That’s on us. That’s us hurting ourselves.” 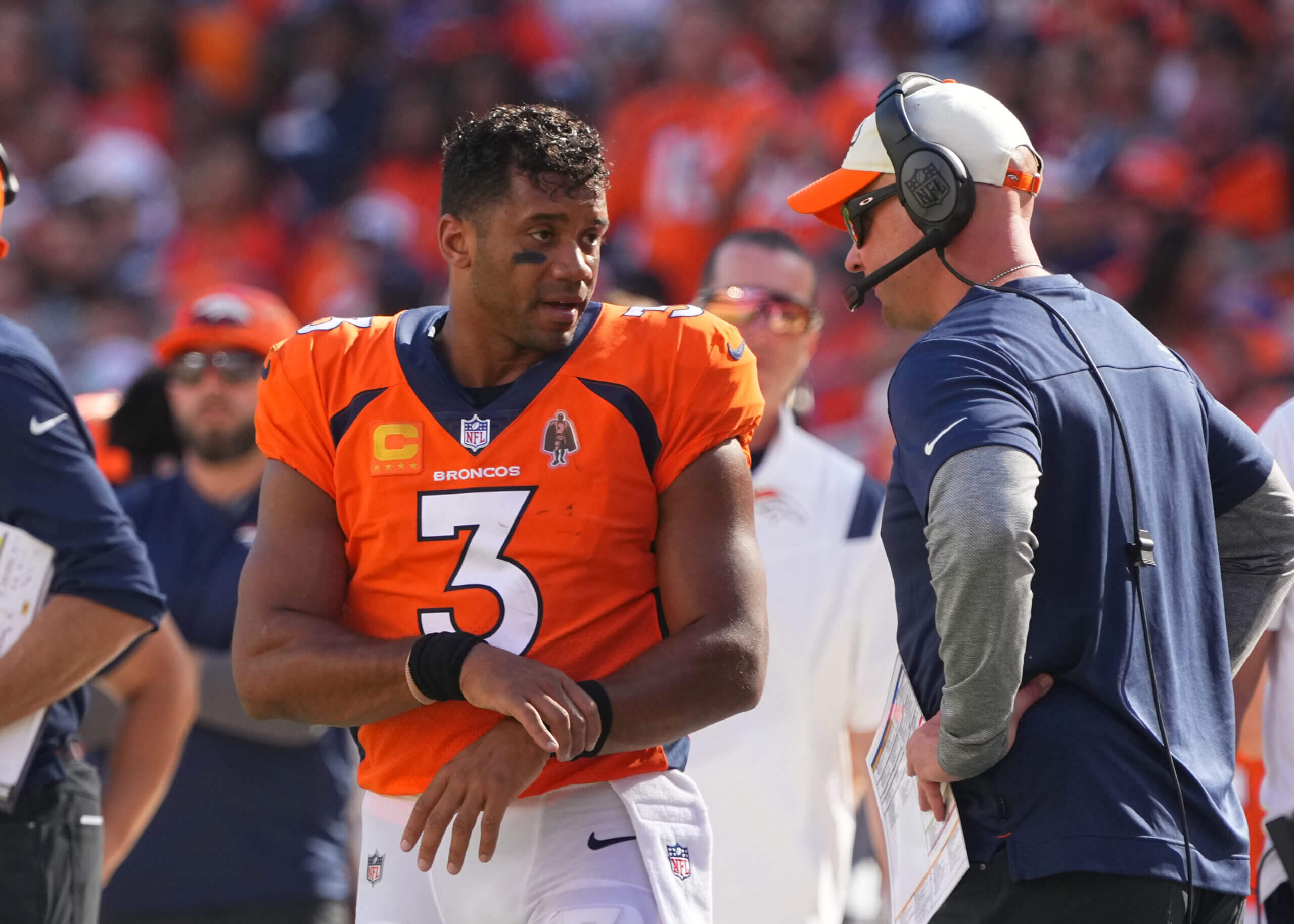 The penalties and the wonky operation weren’t the only dispiriting themes that reemerged Sunday. After failing to score a touchdown in four red-zone trips against the Seahawks, the Broncos squandered both of their red-zone chances against the Texans — both of which included a first-and-goal at the 5-yard line or closer. The Broncos have now had five goal-to-go situations in 2022, and none have ended in a touchdown.

“The problem right now is I feel like everybody’s got to come together on the same page,” said Williams, who rushed for 75 yards on 15 attempts but had only one red-zone carry. “I feel like a lot of times we get out of the huddle a little slow, the clock is running down, (and) we’re trying to rush in the red zone. Everybody is tensing up. So being more relaxed and comfortable down there, that’s really the problem.”

The Broncos appeared to be off to a strong red-zone start when receiver Courtland Sutton, who had a monster day with seven catches and 122 yards, drew a 42-yard pass interference penalty on rookie cornerback Derek Stingley Jr. that brought Denver to the Houston 2-yard line. On the next play, Wilson hit Sutton in the back of the end zone for an apparent touchdown, but a replay review ruled that Sutton had stepped out of bounds. It was reminiscent of tight end Eric Tomlinson’s would-be touchdown catch against the Seahawks that was ruled incomplete because he couldn’t quite drag his second toe in bounds. The Broncos haven’t missed by much at times.

But Wilson, who completed just 6 of 19 passes in the first half for the second-lowest completion rate (31.6 percent) through two quarters in his career, threw two more incomplete passes after the Sutton play, and the Broncos settled for a 20-yard field goal. On Denver’s second red-zone drive, late in the second quarter, Wilson threw incomplete on a roll-out play on first-and-goal from the 5-yard line. After Williams gained four yards on second down, the Broncos dialed up another Wilson pass on third down from the 1, but it fell incomplete. The Broncos once again settled for a McManus chip shot.

“Unbelievably frustrating,” said Hackett, who for the past three seasons was the offensive coordinator of a Packers team that ranked second in red-zone efficiency during that span.

In total, the Broncos have had 15 plays from the 10-yard line or closer through two games, and they’ve passed 11 times. Two of the runs were fumbles.

“There were some things we liked in the pass game because of how they put everybody in the box,” Hackett said. “But in the end, you’ve got to be able to run it down there. You’ve got to run downhill. You might have to run over somebody.”

The Broncos still had enough Sunday thanks in large part to a defense that has not allowed a touchdown in the past six quarters. Dre’Mont Jones had two sacks, Randy Gregory added another, and both players forced a fumble. The Texans averaged only four yards per play, reached the red zone just once and went a combined 3-of-16 on third and fourth down.

“We rush well together,” Gregory said of his chemistry with Jones and others along Denver’s defensive front. “I know what he does well and when he’s on my side, I know what I should do. It’s the same thing with (Bradley) Chubb and everyone else. I think we have a real good unit. We’re going to have a lot of fun getting to the quarterback a lot this year.”

The offense, despite the rib injury to Jeudy and an overall clunky start, found just enough rhythm in the fourth quarter. The top play on a big day for Sutton was a 35-yard catch on a third-and-16 to start the fourth quarter. The clutch reception extended a drive that ultimately ended in a 22-yard touchdown pass from Wilson to tight end Eric Saubert.

“Courtland was so big for us today,” Wilson said. “He made so many great plays.”

For Saubert, who made his leaping touchdown grab on a well-placed ball up the seam, it was redemption after an end-zone pass from Wilson in the Week 1 loss slipped through his fingers.

“We always talk about how you respond, so being able to do that when the team needed that felt really good,” Saubert said. “Now, it’s about growing from here.”

There is plenty of room for growth with these Broncos. The first two weeks of the season has made that clear. But if the self-inflicted mistakes aren’t corrected quickly, a schedule that will soon grow fangs won’t be so forgiving.