Bryce Harper, Phillies are searching for something as NL wild-card lead dwindles

ATLANTA — There was a swing on Bryce Harper’s mind this weekend. It wasn’t the swing that generated a hard-hit liner that could have changed the entire tenor of this forgettable weekend at Truist Park. It was the swing before a diving Ronald Acuña Jr. robbed at least two runs from the Phillies on Saturday.

Harper saw a first-pitch fastball at 92 mph, middle-in — the kind of pitch he loves. Harper, late Saturday night, went to the video room to watch it again.

“I think if I don’t miss that first pitch, the game is different,” Harper said. “I didn’t take a good swing on the first pitch. I rolled it. I hit it foul. So Acuña, of course, made a great play right there in that situation, but I did miss a pitch that I should have hammered. First pitch.”

Harper had hit a few balls hard Saturday night — the signs of something good — but that pitch annoyed him. “I keep missing pitches,” he said. Harper is searching for something. All of the Phillies are searching right now. Harper, in Sunday’s 5-2 loss to the Braves, was hitless in four at-bats. The Phillies were swept here. They have lost four straight games. The cushion they assembled has almost disappeared, but there is something different about this September than Septembers past.

The Phillies are not chasing someone. They are in playoff position, albeit with weaker standing than before. They have a two-game lead over Milwaukee for the National League’s sixth seed. It’s three games, essentially, because the Phillies own a tiebreaker.

There are 16 games remaining. Doubt is everywhere. The Phillies are trying to prevent it from permeating the clubhouse.

“You keep the doubt out by understanding that you haven’t given anything up yet,” veteran pitcher Kyle Gibson said. “OK, so, we lost four in a row. But we go home and we’re up two or three games depending on how the rest of the league goes. That’s how I look at it. You’re still in a confident position. If you’re in a position that has less confidence, then I think that can dictate it. But we’re still in a confident position.”

Across the room, Kyle Schwarber answered questions. The clubhouse was quiet. A few of Schwarber’s teammates lingered close enough to hear his words to reporters. Schwarber is the unifying force — the man everyone is looking to as the pressure mounts. He is not the club’s best player. He is not the prototypical leadoff hitter, but he will not be moving from that spot. “He’s been in a little funk, but he’ll come out of it,” interim manager Rob Thomson said. Whenever the Phillies encounter adversity, it is Schwarber who leads.

Is it hard to block the growing doubt?

“No,” Schwarber said. Don’t get me wrong: Does losing stink? Especially at this point of the year? Sure. But there’s still games to be played. I think that’s the biggest thing; that will be the overall picture. I know that’s the way we’re looking at things right now. I’m sure that people, maybe outside, might have that creep in. But the guys in the room, we’re looking forward to getting out there Tuesday (to face the Blue Jays).”

It is uncharted territory for so many in the room. Jean Segura has played the most games among active MLB players without tasting the postseason. J.T. Realmuto has never been there. Neither has Rhys Hoskins nor any of the homegrown Phillies. Aaron Nola has started the most games among active pitchers without a postseason appearance. Zack Wheeler is second on that list. Harper hasn’t been on the biggest stage in five years.

If anything, the Phillies have made it more difficult. They are excited to see Wheeler again. He will start Wednesday and Noah Syndergaard, who was moved to the bullpen, will be his piggyback partner. The Phillies traded the former first-overall pick in the MLB Draft — a player who wasn’t going to have a place in Philadelphia — and it netted them eight Syndergaard starts before his ineffectiveness prompted a change. There are little reminders — always — of the winding path the Phillies have followed to create a borderline contender.

Bailey Falter, who allowed one run in 4 2/3 innings Sunday, will remain in the rotation. He earned it. 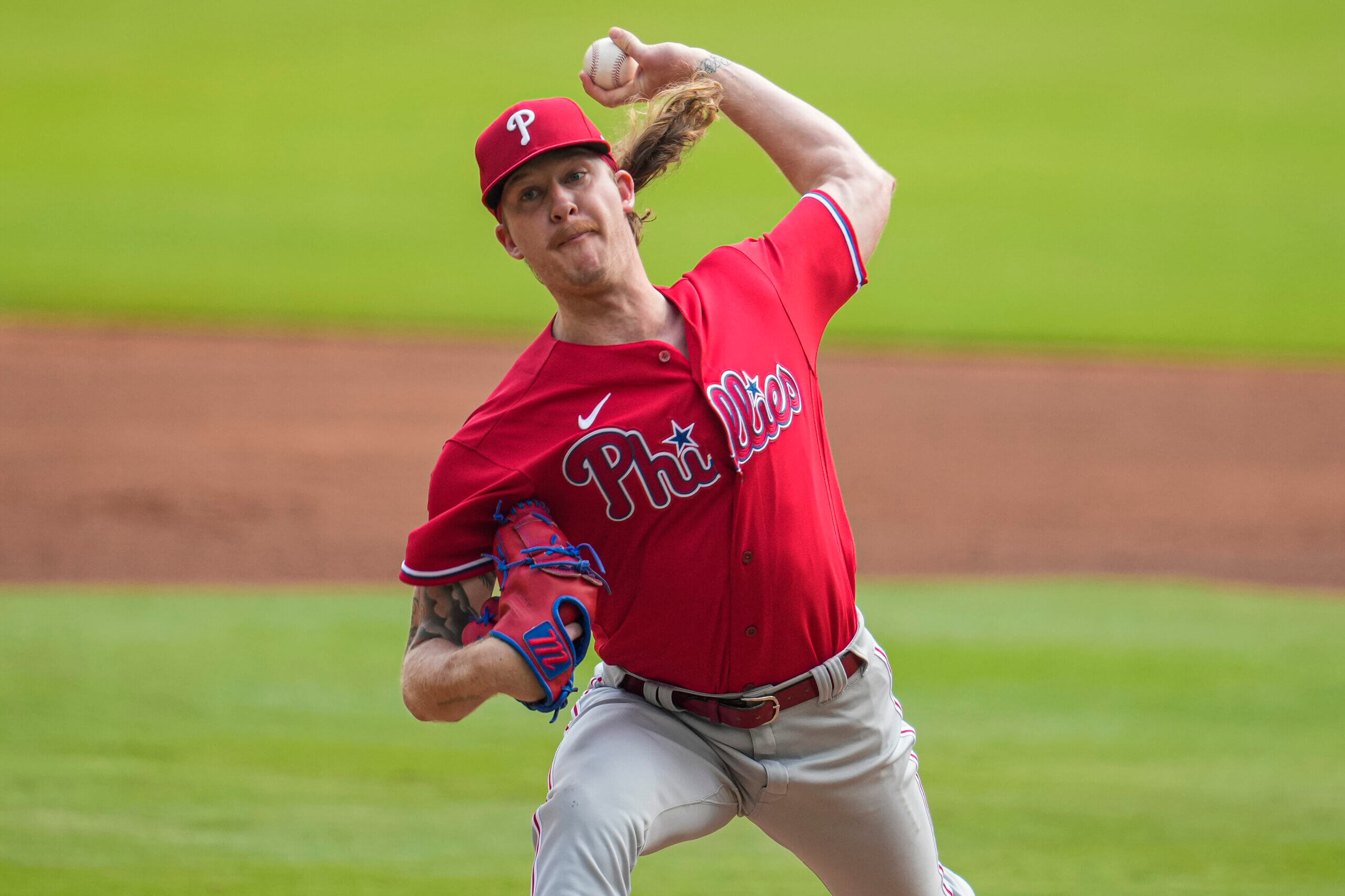 Bailey Falter has allowed two runs or less in seven of his past eight starts. (Dale Zanine / USA Today)

But, before the four-game losing streak, the Phillies had a better chance of making the season’s final few days less stressful. They will be underdogs in any best-of-three wild-card series, but it will be a near-impossible task if they enter that series without the optimal rotation order. If the Phillies have to use Wheeler or Nola in the final three regular-season games against Houston, it’s trouble.

They can still avoid that. But it will require a sudden shift. The Phillies tend to occupy extremes week by week.

“I think you just stay positive and understand we played good baseball for a long time,” Thomson said. “And we’re going to play good baseball again. We’re playing good baseball. We’re just not scoring many runs right now. Keep doing what we’re doing and the offense will click at some point.”

Gibson, a veteran of just one postseason appearance in his 10 seasons, drew upon experience. While he was with Minnesota, previous September collapses hung over the organization. “So,” Gibson said, “until we won the division in ’19, it was easy to think, ‘Here we go again.’ Right? But what we had to keep reminding ourselves was we were a different team than the previous teams.”

That has been a constant refrain inside the Phillies clubhouse. It is a better roster. It is different from before because others are chasing the Phillies.

There might not be juice at Citizens Bank Park this week because the Phillies are not in a divisional race. They have collapsed before and many are still skeptical. The Phillies have an average mark against teams with winning records. They are in a different tier than the Braves and Mets. They might qualify for the postseason and be eliminated before hosting a game.

Is it enough to just get there? Yes, for some. For others? No.

“I think that’s always important to remember: When you’re the horse in the front, you have to be confident,” Gibson said. “That’s just what we have to do. Obviously, we’re not where we wanted to be when we started the season. We wanted to be winning the division. But all you really need is a chance. I mean, all these teams that we’re playing down the stretch are either trying to spoil or they’re good teams.”

That is easier said than done.

Harper carried the Phillies last September and wilted at the end — especially during a do-or-die series in Atlanta. He could not deliver a big hit this weekend either. He’s batted .157/.271/.333 in 51 plate appearances this month.

“I keep swinging at balls out of the zone,” Harper said Saturday night. “You guys have seen that. I just need to be better. I need to get better.”

It wasn’t a bad night for him. But that one swing bothered him. He wanted it back.

“I know this was a stepping stone tonight,” Harper said. “But at the same time you don’t like exit velocity. You like exit hits. Right? I want to be able to get some hits. Not just, ‘Oh, great swing. You’re out.’ So …”

So, it’s back to living and dying every night with the Phillies.