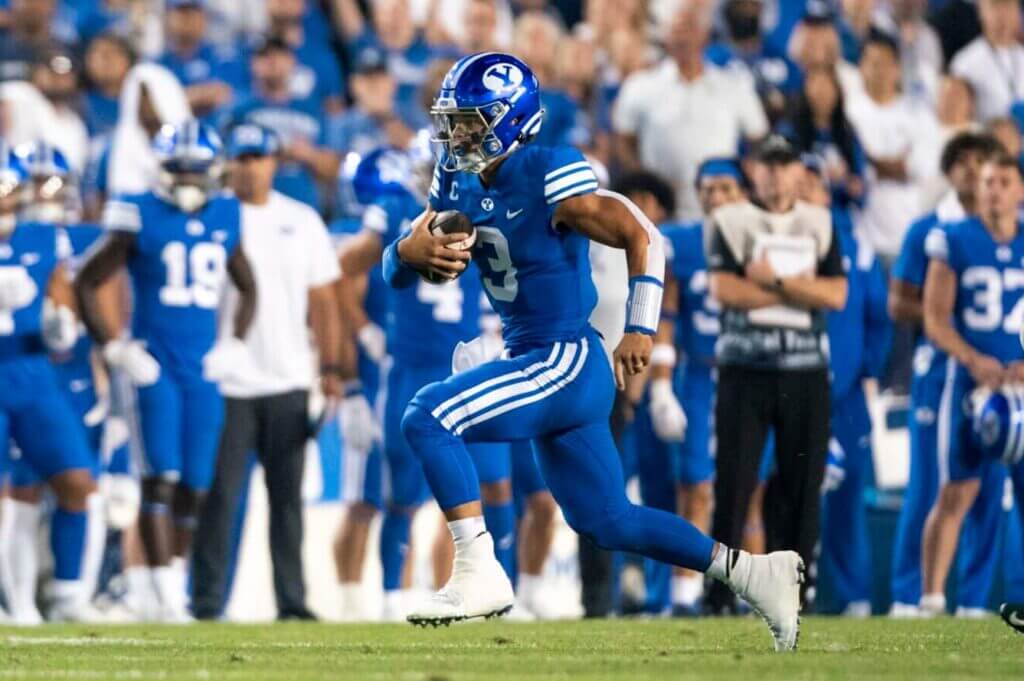 Top 25 teams battle Saturday in Oregon when the Ducks, fresh off a bounce-back 70-14 win over Eastern Washington, host the BYU Cougars, which defeated then-No. 9 Baylor in a double-overtime win. The last time Oregon played a top 25 team, the Ducks were embarrassed by Georgia, losing 49-3 in Week 1. The No. 25 Ducks are just over a field goal favorite against No. 12 BYU.

What was most impressive in BYU’s win over Baylor is that it happened with its top two receivers — Puka Nacua and Gunner Romney — on the sidelines with injuries. The Cougars turned to freshman Chase Roberts as Jaren Hall’s go-to receiver in the win. Roberts hauled in eight receptions for 122 yards and a score.

Early indications point toward both Nacua and Romeny returning for the showdown in Oregon, which is great news for the Cougars.

We know about BYU’s stout offensive line, and while Baylor’s defensive front is one of the best in the nation, Oregon’s is nothing to scoff at, either.

Offensively, the Ducks shook off the three-point effort against Georgia and put 70 points on the board against the Eagles. Bo Nix led the way with five touchdowns, and 14 (!) different Ducks caught passes in the game.

The Cougars will need Hall to be as efficient down the stretch as he was against Baylor to knock off the Ducks at home, as Oregon will look to control the pace of the game. Through two games, the Ducks average 78.5 plays per game to BYU’s 71 – including 86 last week against Eastern Washington.

It’ll be another challenge for both teams – and close to a must-win game for Oregon – leaving me slightly leaning toward the Ducks winning straight up as the Cougars will struggle to keep up with Oregon. I’ll back Oregon up to a field goal, but would look at the total (over 56) as an alternate bet.

What is the spread for Oregon vs. BYU

How to watch and stream Oregon vs. BYU

Kickoff in Eugene is set for 3:30 p.m. ET on FOX. You can also stream the game on the Fox Sports app with authentication.

Expert picks against the spread