Caple: Washington’s revival on full display on a season-changing night 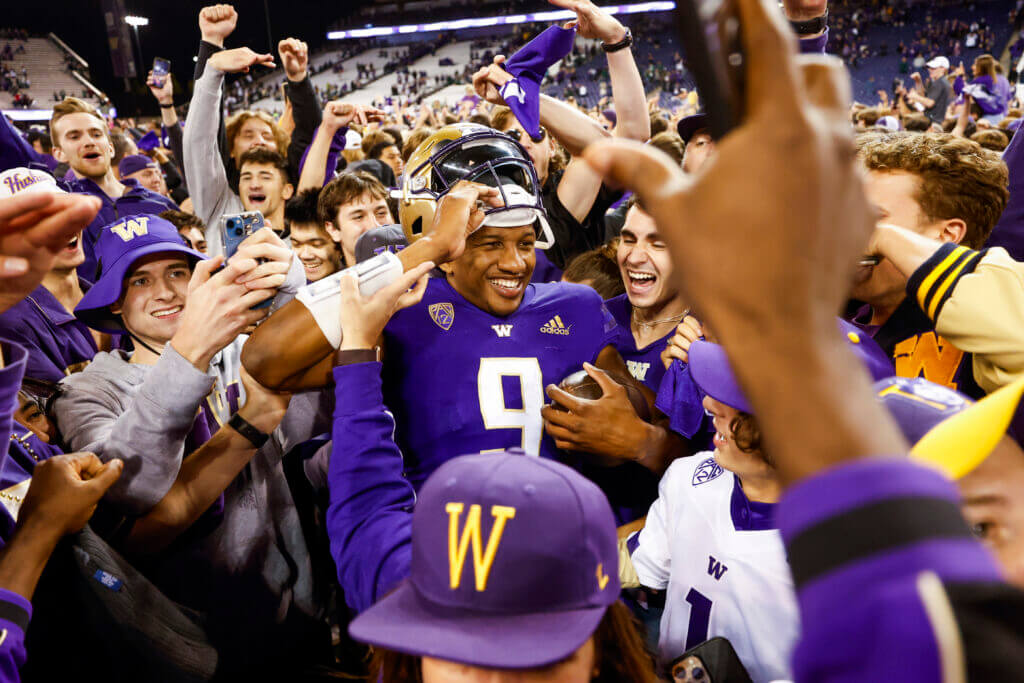 SEATTLE — The official tripped and hit the turf, waylaid by the youthful exuberance sprinting all around him. It’s not often a field-storming reaches critical mass before the guys in stripes can find the tunnel, but Washington’s students surmised Saturday night that they had waited long enough.

Jen Cohen, UW’s athletic director, came to his defense. Or at least she tried. The official was back on his feet before she could reach him, and by then, it was too late to make contact. The kids were bolting toward midfield by the dozen, unabashed in their pursuit of a core college memory, and Cohen had no choice but to concede and seek the safety of the sideline. Once there, she mused: “We’re going to get fined.”

It was, in that moment, as it had been for the hours prior: There was no escaping the Huskies, nor the 68,161 who filled their home stadium for this statement victory over No. 11 Michigan State. They led by three scores at halftime and relented only with MSU in desperation mode, settling for a 39-28 triumph in a game that was never really all that close. In prime time, on national television, Washington rolled to its first victory over a ranked, Power 5 nonconference opponent in 21 years, one of those seminal performances — and atmospheres, a true home-field advantage from beginning to end — that might some day present as the day Kalen DeBoer’s Huskies launched themselves back into the national consciousness.

“We just beat a really good football team, in my mind,” DeBoer said. “To get this win now is just going to continue to put this belief in our guys. It’s only going to get better for us as we go to work in practice.”

It’s one game, yes. The Spartans played without their top receiver and a couple key defenders, and Washington’s flaws revealed themselves too often to ignore. But this is college football, a sport in which one bad loss can tank a career and one bad season can turn a proud program to a laughingstock. There is no reason for the Huskies to run from the coming narrative of UW resurgence, fleeting as those designations might be.

“I personally love being under the radar. I love being the underdog,” said Alex Cook, a sixth-year senior safety. “But now the spotlight is going to be on us for the rest of the season. We’ll embrace it. We’ll still put our head down. We’ll ignore the outside noise, people hyping us up, whatever it may be.”

It would be difficult to overstate what this victory can do for Washington’s program and the degree to which it should change what folks believe possible this season. Suddenly, a run to the Pac-12 title game doesn’t seem so farfetched. Neither USC or Utah are on the schedule. Oregon is the only ranked opponent remaining, and that might be the only game left in which UW finds itself the betting underdog. The Huskies aren’t built to run the table, and they won’t benefit every week from the emotional lift granted tonight by a rocking Husky Stadium, the building’s finest evening in years. But you saw a team Saturday that believes in its new leadership and in itself, and has the weapons to play with anybody in the Pac-12.

That belief begins with the offense, which is so far beyond the mess assembled by the previous coaching staff that it’s almost hard to believe these are mostly the same players. There is one particularly critical newcomer, of course, and he spent Saturday night posing for selfies with strangers, helmet still strapped to his head as he received congratulatory back-pats on his purple No. 9 jersey. Through three games, Indiana transfer Michael Penix Jr. has been a revelation, and he achieved the majority of his final line Saturday — 24-of-40, 397 yards, four touchdowns — in two-plus quarters.

Two throws, in particular, helped UW keep Michigan State from ever making this one truly interesting. There was the 17-yard touchdown pass to Ja’Lynn Polk with 4 seconds left in the first half, a quick answer to MSU’s first score, pushing UW’s halftime lead to 29-8. And there was a 53-yarder to Polk to answer another Spartans score in the third quarter, the Huskies needing only 57 seconds to surge back ahead by 22 points.

Polk caught six passes for 154 yards and three scores, including UW’s first. Jalen McMillan had seven catches for 94 yards, including a 47-yarder on the first possession to set the tone. Rome Odunze returned from injury to catch three balls for 48 yards, including a 29-yarder with the Huskies facing third-and-10 from their own 1-yard line, a back-shoulder throw made by Penix without hesitation.

It’s obvious the veteran quarterback trusts his receivers and that offensive coordinator Ryan Grubb leverages that confidence in his play calling. It helps that Penix still hasn’t been sacked in three games, the Huskies on Saturday neutralizing a pass rush that led the nation in sacks through two weeks.

Saturday was a continuation of an offensive renaissance that Cook, from his safety position, swears he saw coming as far back as April. The offense “shredded” the defense in spring, he said, to the extent that, “I didn’t know about the fate of our defense.” The first two weeks of preseason camp brought more of the same. “The offense was killing us,” Cook said.

“I always say Coach Grubb is a great play caller,” Penix said, “and he puts us in situations where I know we have opportunities to be great in.”

There were missed opportunities along the way, most glaringly two MSU goal line stands. But the Huskies’ defense made plays, too. UW downed Spartans tailback Jarek Broussard for a safety after the first red zone failure. After the second, early in the fourth quarter, cornerback Julius Irvin intercepted Payton Thorne on the next play, and the Huskies settled for a field goal to take a 39-14 lead.

It got dicier from there, if minimally. Thorne eventually took advantage of an inexperienced (and banged up) secondary, piling up 323 passing yards and guiding the Spartans to a pair of fourth-quarter touchdowns that trimmed the margin. The game ended, though, with a 30-yard run by Cam Davis and three Penix kneel-downs, and a celebration that put further distance between Washington now and Washington last year.

The Huskies’ woebegone 2021 season ended with a 40-13 defeat in the Apple Cup and with Washington State fans storming the field at Husky Stadium. Polk remembers. He wanted to. Rather than retreating to the locker room, he and several other teammates stood outside the tunnel and watched the crimson and gray mob, that memory seared into their consciousness as they navigated the future. Cohen was in the middle of that scene, too, finding Polk, tapping his shoulder pads and offering whatever encouragement she could muster for that circumstance.

“I wanted to be able to come and help this team bounce back from that,” Polk said, “and do great things.”

There he was Saturday — a mere 10 months removed from rock bottom — grabbing Sharpies and signing autographs. Someone handed him a disposable camera in the locker room, and he carried it with him to postgame interviews. Corey Luciano, UW’s sixth-year senior center, also stayed on the field to watch last year’s Apple Cup aftermath. On Saturday, the field-stormers wore his team’s colors, and one of them, a youngster, was giddy to receive his towel as a parting gift. Defensive lineman Jacob Bandes stood with both hands outstretched, dispensing high-fives to the students who sprinted past him. Offensive lineman Troy Fautanu posed for a photo with one person on his right and one on his left, then collected another half-dozen before he was done.

Pac-12 commissioner George Kliavkoff attended the game and chatted with folks on the sidelines during the fourth quarter, his all-white adidas sneakers accentuated by the stadium lights. His conference has been raided by the Big Ten already. There’s speculation that the super league isn’t done and that Washington could be among its potential targets. For now, though, he’ll likely levy that $25,000 field-storming fine with a wink and a smile, Washington — and the Pac-12 — defending its turf in a manner that might force its detractors to take notice.

“I don’t think nobody’s seen anything just yet,” Polk said. “We’re just getting started. It’s going to be a long road, and we’re in for it.”