But the timing of his latest injury setback, coming days before the start of the season, was a particularly bitter pill to swallow for both player and club.

For Calvert-Lewin, this was a reminder the problems that plagued him last season are not yet behind him. Try as he might — he returned to pre-season in fantastic shape, impressing the coaching staff at Finch Farm — lady luck is not yet back on his side. Those fitness battles will continue for a little while longer.

For Everton, Saturday was another example of how much they rely on their main striker. Their struggles in front of goal in Saturday’s 1-0 home defeat to Chelsea surprised no one, but were also completely avoidable.

The truth is that lining up without Calvert-Lewin (and indeed the suspended Salomon Rondon) means playing a completely different way. Lampard admitted in the week they could no longer be as direct with the aerial ball and would need to play through the thirds more.

The results were mixed at best, and on several occasions, the Everton manager will have been left ruing the chances his side did not take.

Twice stand-in central striker Anthony Gordon received the kind of headed chance on which Calvert-Lewin usually thrives. In both cases, a lack of killer instinct, and timing, was painfully apparent. Gordon fluffed his lines in a way Calvert-Lewin would not. On a further occasion, substitute Dele Alli, playing more of a false nine role, delayed too long with only goalkeeper Edouard Mendy to beat.

It was no surprise that Everton looked impotent on Saturday at Goodison. From the point at which they conceded before half-time, they rarely looked like getting back into the game.

They huffed and they puffed, but they were never likely to blow the Chelsea house down.

Without his two main strikers, and with Richarlison sold to Tottenham for £60million ($72.4m) this summer, Lampard had been forced to go down a different route in Saturday’s defeat. He plumped for Gordon, who spent time in Everton’s under-18 side as a second striker, as a makeshift option due to his “speed in central areas” and ability “to drop between lines, turn quickly and run into areas Chelsea didn’t want him to run into”.

Lampard wanted to threaten in transition, the movement of a fluid front three designed to play on the lack of mobility in Chelsea’s defence. Despite having less of the ball (37 per cent compared to the visitors’ 63 per cent), Everton had no problem advancing into dangerous areas — they made only one fewer entry into the opposition penalty area than Chelsea.

The issue, as Lampard later noted, was the obvious lack of “clinical edge” — which is unlikely to be rectified without dipping into the market once again.

There is an acceptance at Goodison that solutions will have to come from outside; that whatever quick fix they concoct in the meantime will be a mere sticking plaster.

But finding the right striker, as Everton are realising, is not easy. Nor is any deal on that front currently imminent.

Everton like Armando Broja, who came on as a late substitute for Chelsea on Saturday, but may find his parent club will drag their heels over a decision on his future for a while yet. Like others, they will be fully aware of the apparent availability of another Chelsea striker, Michy Batshuayi, although are yet to have shown much interest in making a move.

Yet Saturday drummed home again how important it is that they address the problem position quickly. Where Chelsea were able to call for Broja, Christian Pulisic and Conor Gallagher from the bench, Lampard could only turn to Dele or a teenager, in Stanley Mills, yet to make his debut.

The disparity in resources said something of the financial gulf between the two clubs. 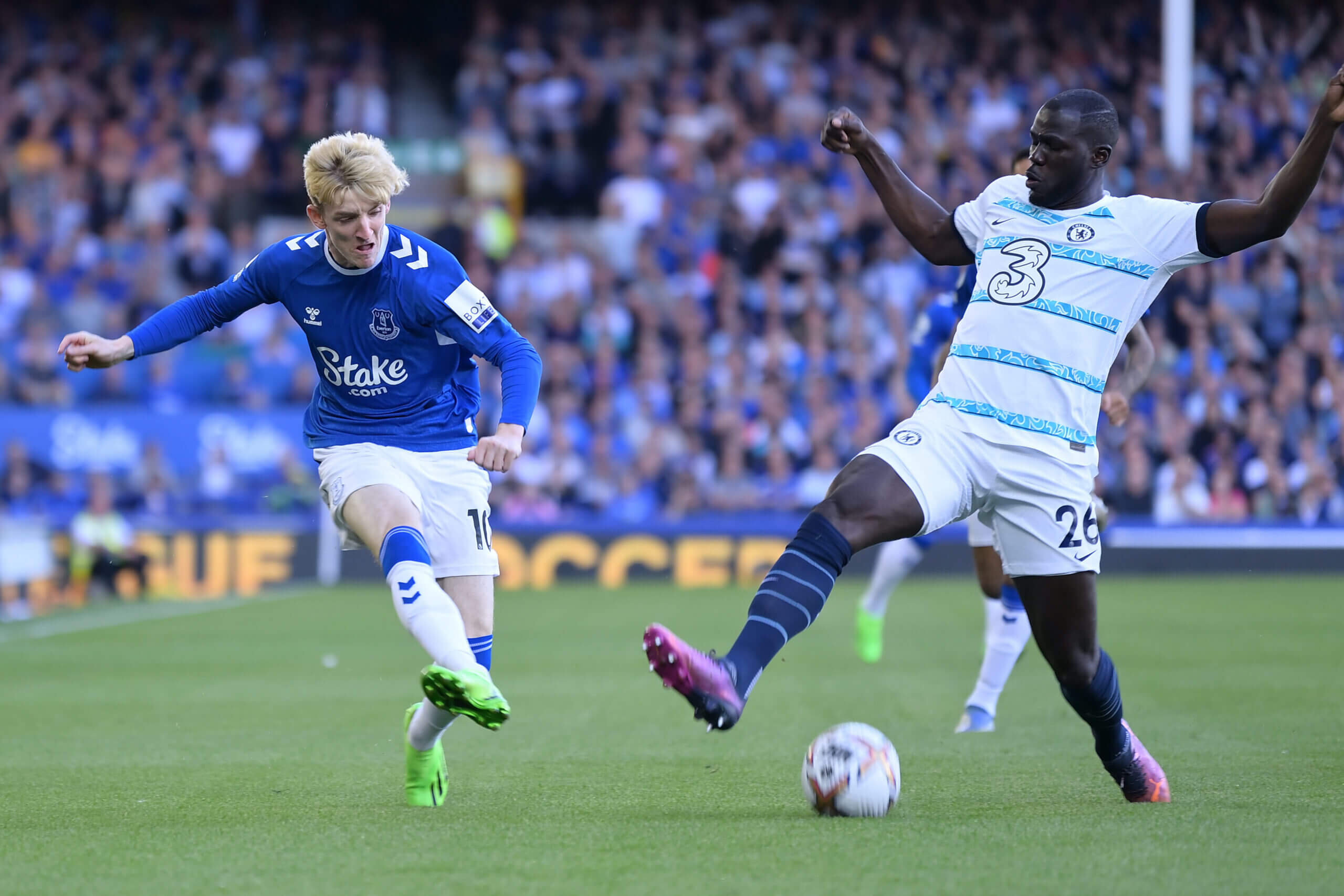 It was a tough afternoon for Anthony Gordon playing as a lone striker (Photo: Tony McArdle/Everton FC via Getty Images)

But it was more than that too. It showed how a lack of planning can come home to bite.

Calvert-Lewin’s injury problems last season were well-documented, and Richarlison has not yet been replaced. In other words, this situation was entirely avoidable.

With Calvert-Lewin still “a few weeks” away, according to Lampard, internal solutions are thin on the ground.

The Gordon experiment against Chelsea brought mixed results. Rondon is now available after returning from suspension, but is unlikely to solve the team’s lack of goal threat by himself. Nathan Broadhead is set to depart on loan to the Championship when he regains full fitness, with Ellis Simms and Lewis Dobbin having already sealed temporary moves to Sunderland and Derby respectively.

Then there is Dele — seen as an option in the false nine role and on the left of the attack by Lampard, but once again overlooked from the start.

There have been glimpses of quality few others in the squad possess during the ex-Tottenham man’s short time at Goodison so far, but not nearly enough to fully convince Lampard. That click moment, when it comes together more than just sporadically, is still yet to arrive. Crucially, a late chance to make his mark was spurned as he delayed a shooting chance following smart work from the dynamic Nathan Patterson.

“I’ve got no problem with him playing there (up front) but he had a chance he can probably put away,” said Lampard afterwards.

Despite improvements in other areas, namely defending set pieces, that was the story of Everton’s defeat on Saturday. Missed opportunities and, above all, impotence in the final third.

Lampard and co need to ensure it does not become the story of their season too.