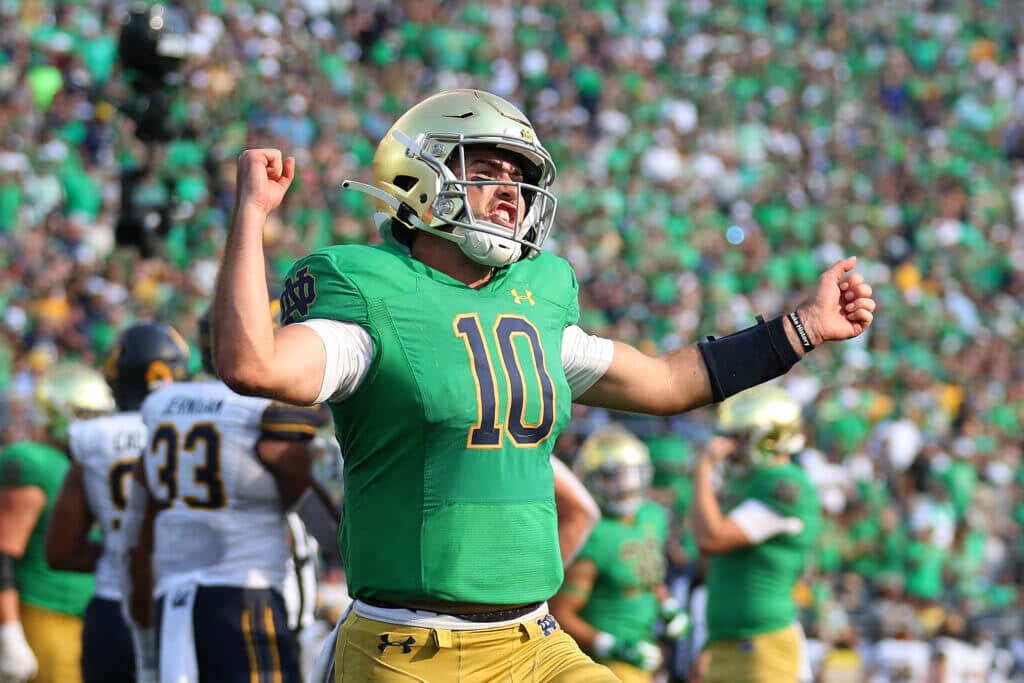 SOUTH BEND, Ind. — Drew Pyne walked into the interview room at 6:27 p.m., ahead of schedule. The early appearance gave the Notre Dame quarterback enough time to grab a bottle of water, listen to teammate Jacob Lacey field questions before him, chat it up with the program’s media relations director and then scroll through his phone.

He could have been peeking at congratulatory messages for winning his first career start, and for giving head coach Marcus Freeman his first career win in the process. He could have been checking his Twitter mentions, or perhaps laughing at the now-viral video of his position coach, Tommy Rees, verbally ripping him to shreds after Pyne missed Michael Mayer on a first-half play that was there for the taking.

Or perhaps he was simply cooling off from the emotional cocktail of all of this — of a whirlwind 35-day span that began with him losing the program’s quarterback race five weeks earlier and culminated with an inspired effort in a 24-17 come-from-behind win over Cal that may have just pulled Notre Dame away from the brink of football disaster.

“He’s a warrior, man. He is a competitor,” a visibly relieved Freeman said of Pyne. “And he’s a great example for everybody in that locker room because you never know when your number’s going to be called.”

Pyne was uneven early, solid late, and ultimately good enough to deliver victory. He completed 17 of 23 passes for 150 yards, relied on his running backs as his top two targets, moved the chains in the second half and found the open men in the end zone — first Chris Tyree, then Mayer — when scoring opportunities presented themselves.

Afterward, he delivered an emotional, colorful postgame speech to his teammates in the locker room, thanking them for trusting in him when it must have seemed like nobody else did.

Notre Dame entered Saturday at 0-2. Its buzzy new coach was 0-3. To make matters worse, Tyler Buchner, the sophomore quarterback whom the program had invested so much in, was ruled out for the season this week after suffering a shoulder injury.

Lose to Cal with a backup signal caller, and suddenly the rest of the season would have become one big math problem of trying to find winnable games left on the schedule.

Instead, Pyne answered the bell in a way reminiscent of so many emergency QB options of Irish past. This program probably thought it was beyond that at this point. Or at least it had hoped to be, with Freeman looking to turbocharge the recruiting operation and turn Notre Dame into a legitimate national championship contender. But a demoralizing start to this era reminded everybody here that you can’t start to win games before you figure out how to stop losing them, prompting a back-to-basics approach that finally got the Irish into the “W” column.

“Relax, man,” Freeman told Pyne after a couple of early misfires. “Go out and be Drew Pyne and execute.”

How quickly things had changed.

When informed of the staff’s decision on Aug. 13 to start Buchner, Pyne was more disappointed than he would ever publicly let on. Recruiting rankings be damned, this was a 5-foot-11, 198-pounder who had proven valuable in spot duty last season, who had worn No. 10 because of Brady Quinn, and who had thrown himself into becoming the starter.

To have that goal end just eight practices into fall camp was crushing.

“There are not 15 guys in this program that are more important to Notre Dame than Drew Pyne,” Rees said that day.

Coachspeak or not, that ended up shortchanging the situation that the Irish now find themselves in. Pyne recalled having Freeman sit him down in his office on that somber day and tell him he’d have two or three days to get over matters before locking in and preparing like a guy who was a hit away from having the fate of the program in his hands.

“I took that to heart,” Pyne said, “because it was true belief that they had in me and it wasn’t fake.”

When Buchner went down late in last week’s loss to Marshall, Pyne practically burst onto the field to lead the offense. When he was informed early this past week that this was now his job, he took the charge to heart, staying in the Guglielmino Athletics Complex till 10 p.m. each night this week.

“We had to kick him out of the office a couple of times,” Freeman said. “Go home, get some rest, stop watching film.”

He kept matters tight with his family, limiting attendance for his starting debut to just Mom, Dad and two of his three siblings. (The third is in class at Wake Forest.) Pyne looked jittery early, leading three-and-outs on his first four drives and fumbling away the snap on the second play of his fifth drive. In between, on Drive No. 3, he misfired twice to Mayer, the All-American tight end who was supposed to double as the new quarterback’s best friend.

That led to the memorable exchange with Rees, a season on the brink distilled to one brief clip distributed to millions by NBC.

How did the new starter handle it?

“I saw that video,” Pyne said, laughing. “Coach Rees, I always tell him to be hard on me. I texted him this Sunday. And I said, ‘I want you to be very hard on me in practice. I’m going to treat practice like a game and I want you to as well.’ And that’s the standard he holds me to and that’s what I asked for, and I respond well to hard coaching.

The same could be said for his team, which is playing from behind this season but can finally begin to unwind a little thanks to its quarterback’s resilience.