With Cole Kmet, Ryan Griffin and James O’Shaughnessy all sidelined, Allen has been getting first-team snaps. On the final play of an end-of-game situation at Soldier Field, Allen was Justin Fields’ target in the end zone, but the pass fell incomplete.

“That is something that I wish I could’ve repped before because I could’ve kept better spacing down there in the end zone with the certain type of coverage that it was, but I really hadn’t had that look before,” Allen said. “I know I’ll make that adjustment and be able to make that play the next time.”

Allen brings a unique profile to the tight ends room. He is a 25-year-old rookie who was in the same Iowa State recruiting class as David Montgomery. He was all-state in football and basketball in high school while also winning a state championship in javelin. He comes from an athletic family. And he has a pair of degrees in mechanical engineering.

Allen sat down with The Athletic after Wednesday’s practice. The following has been edited for length and clarity.

You’re the son of a coach (Chase’s father, Terry, was the head coach at Northern Iowa, Kansas and Missouri State). What was that like?

I’ve had a lot of guys here tell me that I’m the most stereotypical coach’s kid they’ve ever met. It was a blessing for me. Football has been a part of my life since I was born and it’s granted me a lot of great perspective to see things through the eyes of coaches, the people upstairs in this building and the players. My dad taught me how to love football and I’m happy it was that way. 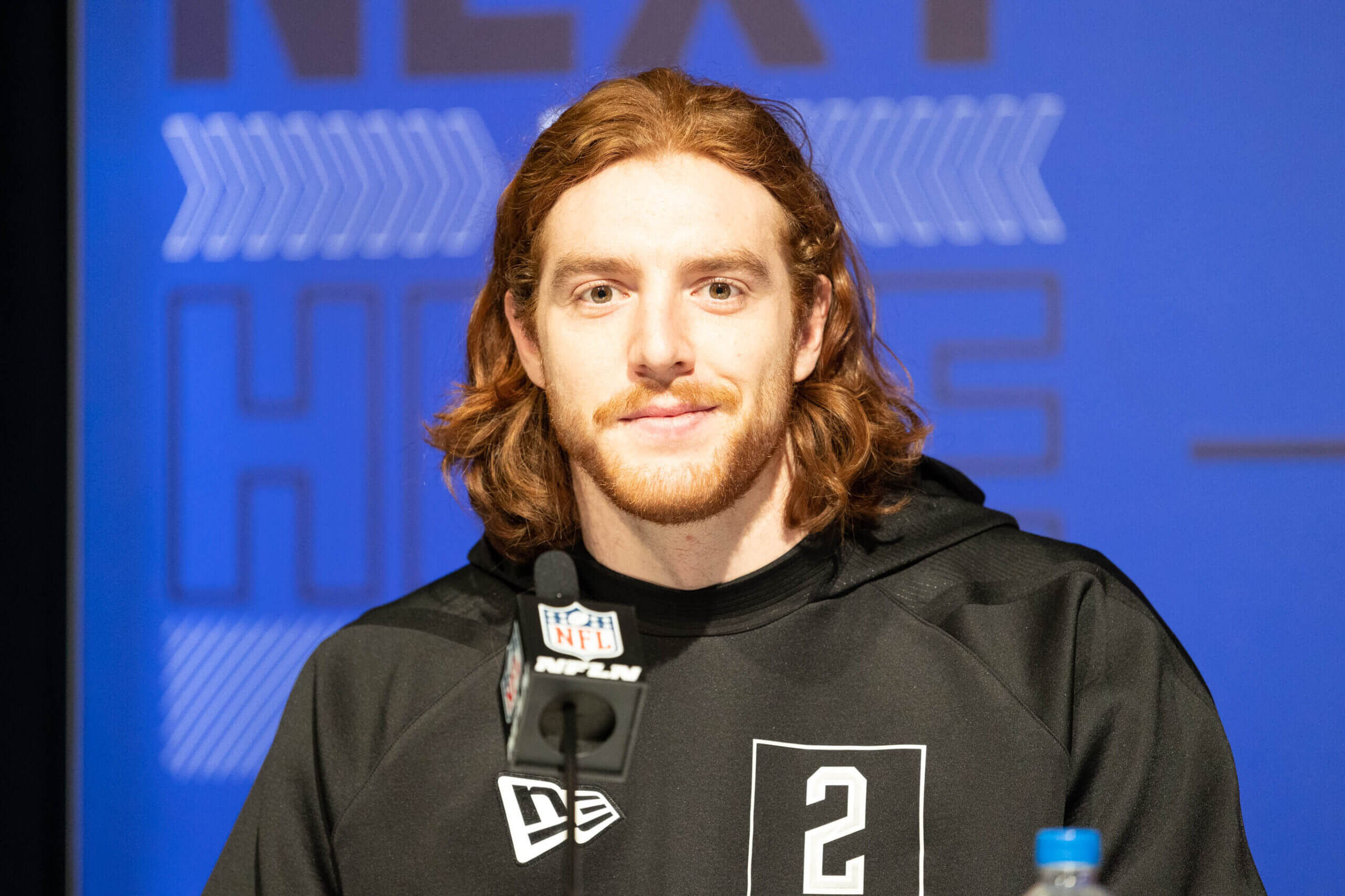 What are the things you do that resemble a stereotypical coach’s son?

Well, I’ve been asked to tell a lot of jokes in front of the offense and people have said, ‘Wow, you’re very comfortable speaking in front of a crowd. That is very coach’s son of you.’ That’s one thing. And just the bigger picture of the game, understanding that, is good.

Your first year at Iowa State, obviously not what you wanted …

The car accident you were in (Allen was hit by a car on campus and required 103 stitches), how often do you think about it?

Is it only when someone like me brings it up?

I try not to think about it that much. I always wanted it to be something that people don’t remember me for. But it just keeps on coming up. If I’m walking down a sidewalk and a big old bus comes flying by, I get like, oh, get some chills there. But, I mean, not too often.

This topic isn’t like a lot of the other ones I’m asking you, but if you’re learning about Chase Allen, it’s kind of hard not to tell that story, right?

Yeah, yeah. I mean, 103 stitches. I was able to get up and walk away. I was leaving practice. They have since built a crosswalk leaving our football facility right there, so I was just happy I left a lasting legacy.

Who’s the best athlete in your family?

That’s a good question. I’ve got a sister who’s a college rower at (Kansas). She’s tougher than nails. I’d say she’s the toughest one. My brother plays football at (Northern Iowa). I’d probably say it was my dad back in the day. But, shoot, he was a triple-option quarterback. He took a lot of hits. He can’t move as well as he used to be able to move, so, I’ll probably take the title right now.

And Grandpa was also a great athlete, right?

Oh, sorry, it was Grandpa. It was Grandpa by far. He was an Olympic swimmer and he played football at the University of Iowa and he swam. Then he ended up coaching as well. He passed away before I was born, so I never got to meet him, but I’ve heard a lot of great stories.

How would you describe your hoops game?

I played some pretty high-level hoops in my career. I played on a Mokan EYBL (a top AAU program) team with Trae Young and Michael Porter Jr. Shoot, I was watching the All-Star Game a few years ago and I was like, ‘Yeah, I’ve played with or against 10 of these guys on the court.’ I’m not the No. 1 scorer. I wasn’t the first shooting option. But if you need a guy to set some good screens, get a rebound or two, just muscle around on the inside, I’m your guy.

Yeah, I’ll get grimy down in the post. Arm fighting, jabbing guys, getting them low, playing the dirty game. But that’s not the best way to play pickup, so I kind of take it easy in that department.

As a coach’s son, I imagine you’re a big up-and-under guy?

Oh, yeah. Up and under, the footwork, the post moves, all of it. Baby hook.

How’d you get into javelin?

I’m from Springfield, Missouri, in the Ozarks. Beautiful place. I was a junior and they had javelin the first year. I thought, man, this would be something really interesting to try. I did it, had the best throw in the state that year. Then the following year, it was the first year they had it at the state tournament. No one had any technique and it was just go out there and chuck this thing as far as you possibly can. I was able to do that better than anyone in the state, so I got a gold medal there, state champion in javelin. Since then, my record’s been broken and stuff. It’s kind of like throwing a football.

I used to think it was like throwing a baseball, but it’s totally different, I take it?

It’s different. You’ve got to extend it behind you and then do like a crossover run for 10 yards before you just try to throw it through a little hole at like 45 degrees.

You did javelin, football, basketball and you ran the hurdles. Did I get them all for high school?

That was them, yeah. 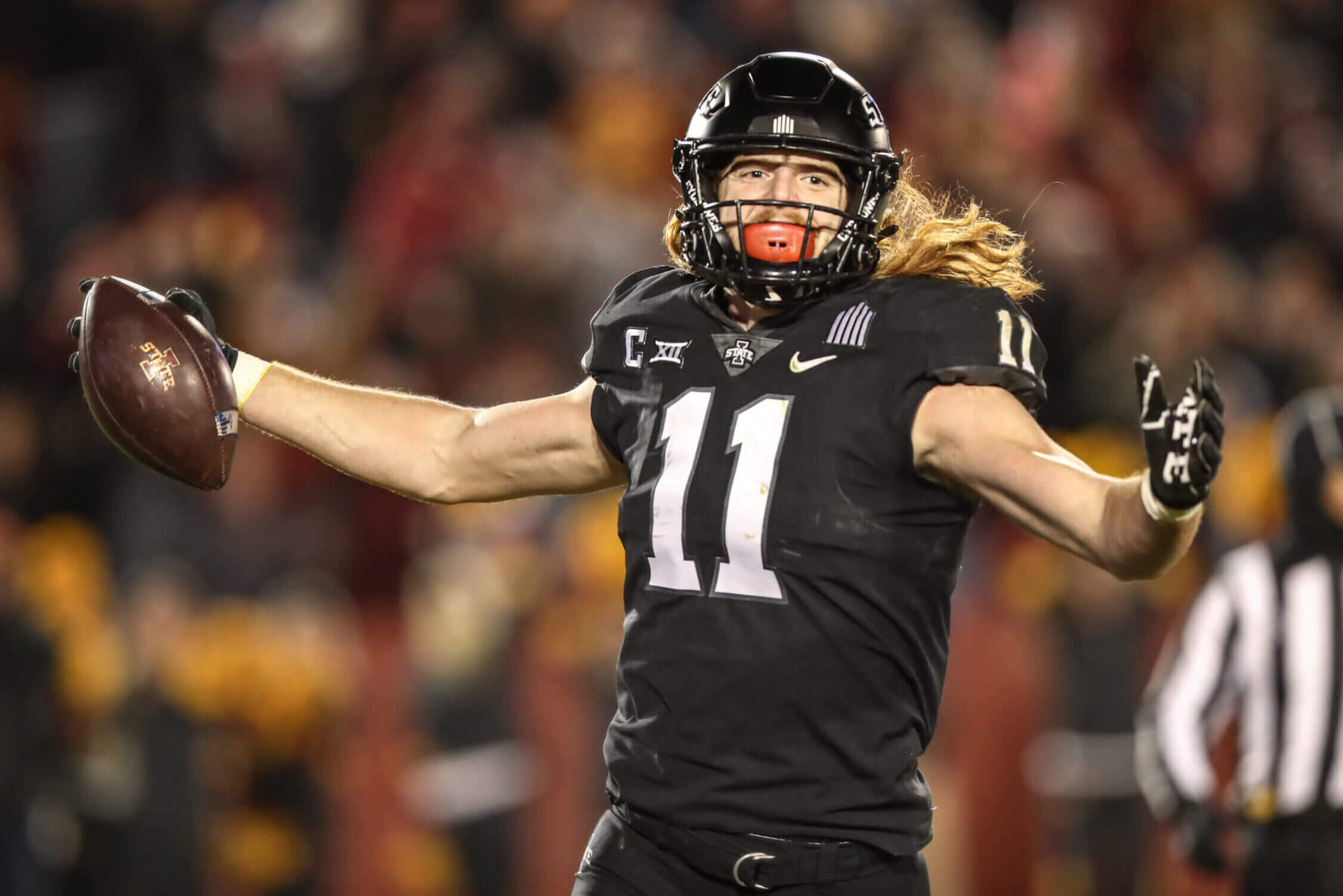 What was your best high school sport?

OK, 6-6, so you were a big man. But if you wanted to continue in basketball, you would’ve had to be a little bit more of a wing guy?

You got a mechanical engineering degree?

Yeah, and a master’s.

How did that become your path?

Well, I always knew I wanted to get into engineering and be an engineer. I spent a lot of time at Iowa State — me and David Montgomery actually came in together in coach Matt Campbell’s first class. And how long as (Montgomery) been here now, three years? And I’m just now joining up with him again, so I spent a lot of time in college, a lot of time in the classroom. But I was able to get that master’s degree. It worked out. That’s something very valuable for that COVID year. Why pass up guaranteed football? And then things fell into place and I’m here now, so it all worked out.

What would you want to do in your post-NFL career with those degrees?

Mechanical engineering is very broad. It’s anything that moves. But I really like the material science part of things where on a very micro scale, looking at how different metals, their configurations, or plastics, that’s something that excites me.