For Manchester City, the prospect of Kalvin Phillips’ shoulder surgery is certainly an inconvenience but for England, it is a much bigger headache.

For Phillips himself, the timing could not have been much worse, although England boss Gareth Southgate will give him every chance of being fit for the World Cup.

Set to undergo surgery in the coming days, Phillips will have nine weeks to get himself fit enough to reprise his starting role in midfield before England kick off their campaign on November 21.

His City career has barely got off the ground, with 14 minutes of action to his name in all competitions. He knew when putting pen to paper at the Etihad Stadium that he would, initially at least, play a supporting role to Rodri and due to injuries — not least that problematic right shoulder — he has had very few opportunities to show exactly what he can do.

The 26-year-old missed a couple of early games this season with a muscle injury but when given an opportunity to start in a friendly against Barcelona on August 24, after the Premier League season had started, he injured that shoulder.

He had said privately that it was not particularly serious and after missing a couple more games, he was able to put together some admittedly very short cameos in City’s two Champions League games earlier this month.

But then in training last week, the shoulder dislocated again, from what is said to have been regular contact during a practice match.

“With the shoulder, if it happens more than three or four times the doctors say that surgery may be necessary,” Pep Guardiola said after City’s win at Wolves on Saturday.

There had been some doubt about what to do. It is a long-standing problem that needs rectifying — the more a shoulder dislocates, the more likely it is to happen again in the future — but, of course, the timing is not ideal.

The first time his shoulder dislocated was in a home game for Leeds against Wolves in October 2020. But the significant injury happened on the final day of that season against West Brom. Especially frustratingly for him was that it happened during a tackle at the very end of a game that was nothing more than a dead rubber, although there was a crowd at Elland Road for the first time after the COVID-19 lockdowns. 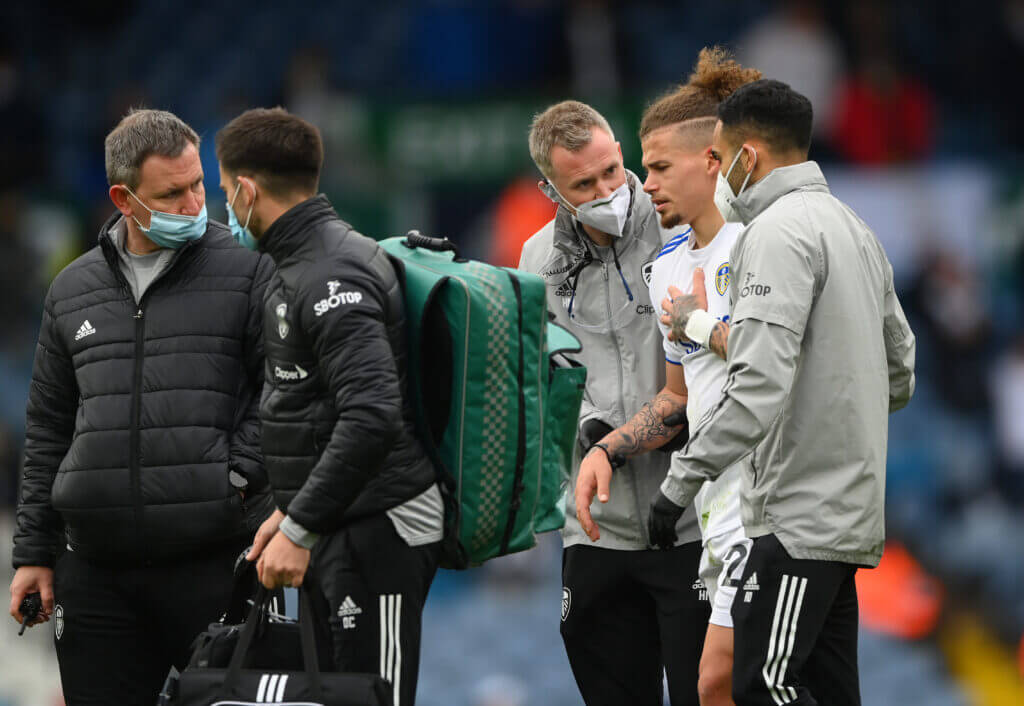 Phillips leaving the pitch with a shoulder injury in 2021 (Photo: Lynne Cameron/POOL/AFP via Getty Images)

He did not have surgery on either occasion. After the injury against Wolves, an operation was never considered to be an option. The injury against West Brom came just before the European Championship, so he would not consider surgery as it would have ruled him out of the competition. Had it not been for that, Leeds might well have booked him to go under the knife.

“I was very fearful that I wouldn’t be involved in the camp and in the tournament,” Phillips said at the time.

“Those are the first emotions that come to your head and I think I’ve recovered well and my shoulder feels fine now.”

But it had become apparent to Phillips and staff at Leeds that he would eventually need the procedure. It was even considered that he could have surgery while he was recovering from a lengthy hamstring injury last season.

Leeds were hopeful he would return from the hamstring injury rapidly and therefore did not want to rule him out for longer with shoulder surgery. Though he did not return until April 2022, no one was rushing to sideline him for longer than necessary at the start of the year.

But despite his hamstring injury, the requirement to play with strapping on his shoulder for games and other players being aware that he might need surgery eventually, there was no operation.

Now the hope for him and City is that he will recover in time for the World Cup. Phillips is understood to have been wary about surgery as he was conscious that he missed a lot of last season with injuries and that he may not have been a guaranteed pick for Southgate anyway.

He was named in the England squad last Thursday, though, and Southgate is a big fan of the midfielder.

“The way he has taken to international football, it hasn’t surprised us because what we’d seen with Leeds, even in the Championship, we felt could convert into our team,” the England manager said last September. “We felt he could play an important role with us.

“He’s a very, very good player and he’s been a really important part of this team.”

Guardiola, for his part, suggests that Phillips could be back in time for Qatar.

It may well be a classic case of a key England player going into a major tournament with only a few weeks of training, if that, and very little match practice under their belt.

England do have alternative options if needed, and the most appealing may be Borussia Dortmund’s 19-year-old Jude Bellingham, although Jordan Henderson and James Ward-Prowse offer more experience.

It cannot be said that City’s predicament is quite as pressing, but it does strain their midfield options. Phillips was signed following Fernandinho’s departure and he is by far Guardiola’s preferred candidate to step into the holding midfield role if Rodri was injured or needed a rest.

It was put to Guardiola that Phillips had endured a “frustrating” start to the season, to which the Catalan replied, “Absolutely. For us, too.”

“Rodri cannot play all the games and sometimes you need two holding midfielders,” he added.

Despite everything, the time has been deemed right to fix this two-year-old problem. For Phillips, the race to make the World Cup is on.