CLEVELAND — The door opened and Robert Saleh walked through it, the screams and celebrations of his locker room trailing him. He stood behind the lectern, grabbed it with both hands and took a deep breath. He checked his watch.

When Saleh looked up, he smiled.

“What, did something happen?” a reporter cracked.

The Jets were 1:55 from misery, a familiar feeling in Florham Park. They’ve been on the other side of heartbreak too many times to count. But on Sunday, fortune favored the Jets. The Browns will have to answer for an unprecedented collapse, blowing a 13-point lead. And the Jets can bask in the glow of an astonishing victory, a comeback for the ages and one of the best wins this franchise has experienced in a long, long time. It’s only Week 2, and that’s not hyperbole.

What happened on Sunday was about as far from “same old Jets” as you can get.

They did something the Jets hadn’t done in 13 tries: win in September. Even more impressive: They did something no NFL team has done in 21 years: They overcame a 13-point deficit in the final two minutes of a game — and won.

The Jets trailed 30-17 after a Nick Chubb touchdown with 1:55 remaining. The Browns missed the extra point. What awaited the Jets: another week of panic, of consternation after another blowout, an 0-2 start that would give fans another reason to be resigned to the fate of another long season.

Instead, the Jets changed the trajectory: a long touchdown, a successful onside kick, another touchdown and an interception later, and they had beaten the Browns 31-30.

“We’re off the schneid,” Saleh said. 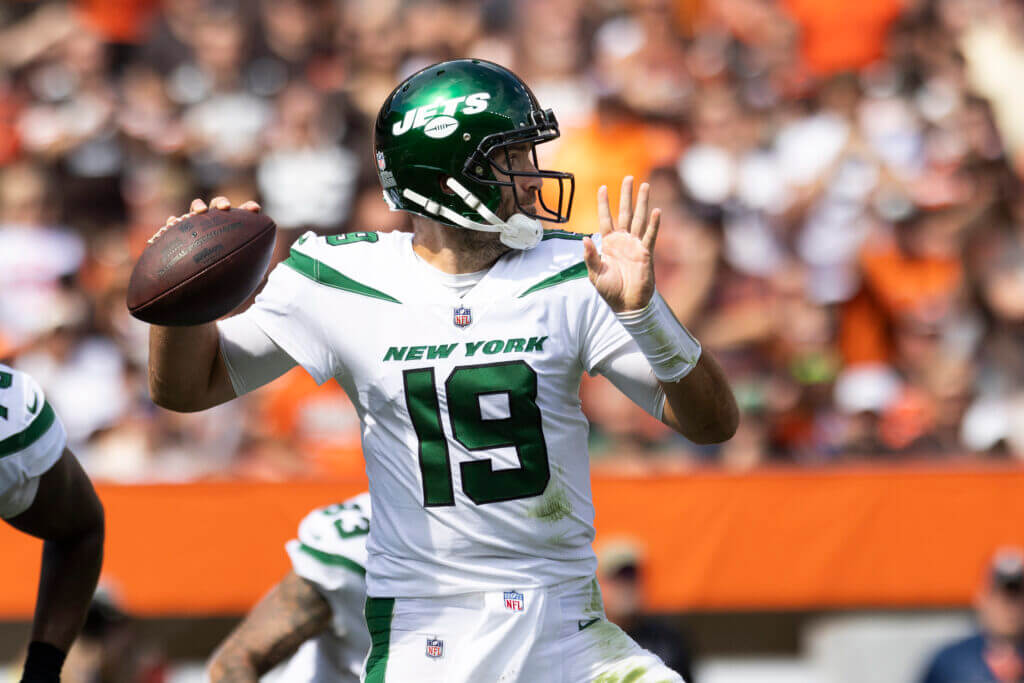 The Jets are 1-1. Their Week 3 opponent, the Bengals, made the Super Bowl last year. Now, though, Cincinnati is 0-2.

“One thing I’ve learned in this league is called confirmed validity,” Jets defensive tackle Sheldon Rankins said. “I think once you’ve shown yourself you can do it, it’s a lot easier to believe you can do it again. Being able to have this young group of guys come into a hostile environment, things aren’t going right, we’re down 13 points, bullets are flying. And then to be able to just rally, lock in and make those plays to win big time football games — that’s going to go a long way.”

So how did they do it?

Weirdly, it started with a touchdown — a Browns touchdown.

Here are the five moments that defined this wild win, and how they came together.

All the Browns had to do was run out the clock. The Jets had no timeouts left after a 12-yard Kareem Hunt run converted a first down with 2:09 remaining, to the Jets 24. On the next play, Chubb stiff-armed D.J. Reed to the ground and ran 12 yards for an easy touchdown, his third score in a dominant afternoon.

This is when the Jets knew they had a chance.

“I’ve never been so happy for a missed tackle in my life,” Saleh said.

This is one of the worst losses in NFL history when you add it all up.

This is absolutely unreal. pic.twitter.com/yT4aUnqzyZ

The Browns could’ve run down the clock for three plays and then kicked a field goal. Instead, they scored with 2:02 remaining. On top of that, kicker Cade York missed the extra point.

Jets wide receivers coach Miles Austin walked over to his position group and said: “They just gave us our only chance.”

“When he scores you’re like: OK, that’s not what you’re supposed to do,” Flacco said.

Saleh said Chubb’s mistake is “going to be one that shows up on Friday for us as teachable moments,” he said, adding that once Chubb scored “the echo in the headset is: They gave us a chance. Let’s see what happens.”

2. Corey Davis, and a sea of green

If the Jets had any chance of coming back, they needed to move (and score) quickly on the next drive, to give them enough time to get the ball back and score again.

Before the offense took the field, backup safety Will Parks went up and down the sideline, talking to every offensive player within earshot.

“In those situations, in nine times out of 10, you don’t see wins come out of there,” Parks said. “The offense, I said: ‘Look, y’all gonna score quick, we’re gonna get the ball back, and we’re gonna score again. Then, game over.’”

The offense took the field with 1:55 on the clock. Flacco’s first pass was a laser, 9-yard completion to tight end Tyler Conklin, who made a nice catch after a drop and fumble on plays earlier in the game. By the time Flacco snapped the ball and dropped back for his second pass, wide receiver Corey Davis was already wide open down the field, the result of a miscommunication between the Browns safety and cornerback in his coverage area.

“When I threw it I’m like: Oh my gosh … nobody is anywhere near him,” Flacco said.

Davis was surprised at how open he was.

“Honestly, yeah,” Davis said. “It was a good route, but I didn’t think it was that damn good.”

Davis caught the pass, and said he thought: “Man, run!”

It was an easy 66-yard trot to the end zone, and a two-play scoring drive that only took 33 seconds off the clock.

Then, FirstEnergy Stadium went silent — as if the Browns fans knew what was about to happen.

“It was a really weird feeling because of how quiet it got there,” Flacco said. “That feeling was something I’ve never felt before. The game wasn’t over.”

The Jets practice onside kicks every Friday, and sometimes on Wednesdays. They did it both days this week. Punter Braden Mann is the kicker in those situations.

Special teams coordinator Brant Boyer called for a bit of a trick kick: Mann would go to kick it to the right side, and then switch and kick it to the left at the last second.

“It was kind of a wild play,” Mann told The Athletic. “That comes straight from Boyer. I think it was a great call.”

After a couple bounces, Parks dove at the ball and then hit it up with his right hand. A pile formed around the ball, with Justin Hardee at the bottom of it. He “got to the bottom of the pile and I don’t know what happened down there,” safety Ashtyn Davis said, “but he came up with the ball.”

Wide receiver Garrett Wilson celebrated on the sideline. He had dropped a third-down pass in the fourth quarter.

“I went absolutely crazy,” he said. “I didn’t want my drop to be the reason we lost the game.”

“Once that happened,” Saleh said, “there was no doubt we were scoring once we got the ball.”

Jets offensive coordinator Mike LaFleur calls plays from the booth via headset. Saleh told him before the final drive that he had “plenty of time” and not to rush anything.

“We had so much time,” Saleh said, who told LaFleur: “Don’t give (the Browns) too much time when we score.”

Flacco took the field with 1:20 left after the onside kick, at the Browns 47-yard-line. His first pass was incomplete. Then, he started dealing: 12 yards to Michael Carter, offsides penalty on the Browns, 4 yards to Conklin, 5 yards to Carter, incomplete to Ty Johnson, 12 yards to Wilson, incomplete to Elijah Moore, throwaway …. and then he connected with Wilson, a 12-yard touchdown. Greg Zuerlein made the extra point.

Flacco was “just a calming force,” Saleh said. “He’s been in a lot of these situations. He was cool and calm, got the ball where it needed to go and left the door open just a crack and that was enough for our guys to break through.”

After fans called for Mike White to replace him last week, Flacco responded by completing 26 of 44 passes for 307 yards, four touchdowns and no interceptions.

And Wilson could breathe after his brutal drop earlier in the fourth quarter. The rookie had a star-making afternoon, catching eight of 14 passes for 102 yards and two touchdowns, including the game-winner.

“We’ve known the lights aren’t too big for him,” Flacco said.

The game wasn’t over quite yet, though.

5. Ashtyn Davis, out of nowhere

The Browns got the ball back with 22 seconds left. The first play was a 21-yard Jacoby Brissett scramble to the sideline. It allowed defensive coordinator Jeff Ulbrich to sub in Davis at safety for the next play, his first defensive snap of the season.

He read Brissett’s eyes, and jumped in front of a pass intended for Amari Cooper, who had roasted the Jets secondary (nine catches, 101 yards, touchdown) all afternoon. Davis easily picked it off and slid to the ground, clinching a win. At that point, Reed hadn’t even realized the Jets had won.

“When he scored I don’t know what happened,” Reed said, laughing. “I didn’t even know we were up by one. I thought it was a tie game. So when Ashtyn got the pick, I said, ‘Why did you slide?!’”

THE JETS HAVE WON THE FOOTBALL GAME

It was a cool moment for Davis, a 2020 third-round pick who many have already labeled a bust.

Instead, he clinched a Jets win.

“I don’t even know how to describe my emotions,” Davis said. “I was obviously very happy.”

The Jets won a game in which they trailed by 13 points with less than two minutes remaining, in which the Browns rushed for 184 yards and their quarterback completed 16 of his first 18 passes. But none of that mattered. Their heroes included a 37-year-old quarterback (Flacco), a rookie in his second game (Wilson), a punter who might’ve lost his job with a bad game (Mann), a safety who was just called up to the 53-man roster (Parks) and another safety (Davis) who many thought would be cut after training camp.