LAKE FOREST, Ill. — As the Bears’ offense and defense gathered for a team drill, linebacker Roquan Smith — still the best player on the team — made his way down the field to watch.

He’s done that in most, if not all, practices during training camp. Still searching for a contract extension, Smith remains a spectator. On the physically unable to perform list, he works with the trainers.

In Smith’s absence, veteran linebackers Matthew Adams and Joe Thomas have played well. Adams has taken over Smith’s weakside role, while Nicholas Morrow has remained in the middle. Thomas has been on the strong side in the base defense, which presumably will be Adams’ spot when Smith returns.

“Whoever you have, you got to play with whoever you have, and that’s reality in the NFL,” defensive coordinator Alan Williams said Sunday, after a closed practice inside the Walter Payton Center because of the rain. “If you spend your entire time thinking about what you don’t have — instead of what you do have — and problem-solving in terms of what you do have, you’ll be behind the eight ball, and that’s not what we’re going to do. And we’re not going to make excuses and reasons why we can’t. We’re going to find reasons why we can.”

At the very least, Adams and Thomas are showing that they can be more than capable fill-ins for the Bears’ defense, which continued to win its share of drills against the starting offense, including on Sunday.

Williams described Thomas and Adams as two “standouts right now” for his defense in camp, and they should be — Adams played for Williams and Bears head coach Matt Eberflus in Indianapolis; Thomas played for Rod Marinelli, Eberflus’ mentor, in Dallas.

Thomas has paced the defense in turnovers forced during camp. “We keep track of how many guys have intercepted the ball, how many balls you’ve knocked out, how many scoop and scores,” Williams said. “And he’s leading the group.” 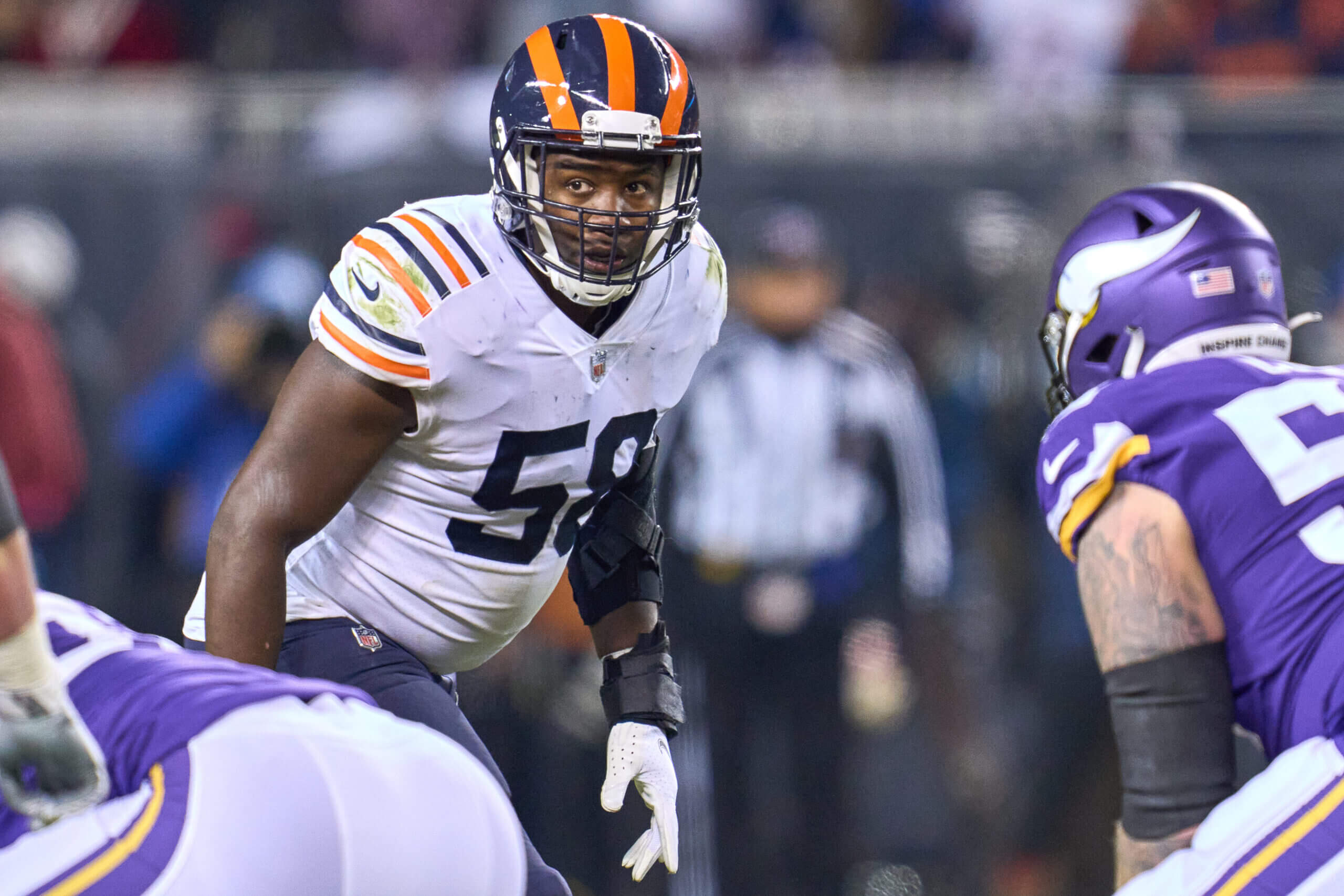 Roquan Smith has continued his “hold-in” as he seeks a contract extension. (Robin Alam / Icon Sportswire via Getty Images)

What’s next for Roquan?

Adam Jahns: Eventually, Smith’s “hold-in” has to end. But when? It’s a good sign that he’s taking in practices, watching from the sidelines and interacting with his teammates. He’s also taking part in meetings. But you have to imagine that seeing the plays from Adams and Thomas makes Smith a little eager to return. He shouldn’t feel threatened by what Adams and Thomas are doing, but those could be his plays to make against tight end Cole Kmet, running back David Montgomery and others.

Kevin Fishbain: What’s that phrase from former Packers executive Andrew Brandt, ‘deadlines spur action’? I’m not expecting to see any movement with Smith’s situation until we get closer to Week 1. If it gets to the first week of September, will Smith practice and prep for the 49ers game or continue to wait for a contract? It is reassuring that Smith is at all the practices, in the meeting room and able to work with the strength-and-conditioning coaches, but the ultimate goal is getting him on the field for the opener.

Jahns: It’s still a new defense for Smith to learn and feel on the field. I thought of Smith when the Bears’ offense started practicing against the scout team and specific looks. Offensive coordinator Luke Getsy said that part of the reasoning behind it was that defenses in the NFC North have three-man base fronts, whereas the Bears are now a 4-3 under Eberflus. Smith is in the middle of that transition, having played his entire career in a base 3-4. Though Fields generates the most attention, the starting defense is going through its own scouted looks elsewhere in practice. Smith can only watch them right now.

Fishbain: All due respect to Adams, but is there a bigger drop-off on the roster from starter to backup? Smith is this team’s best player. He’s its leader. We’re sounding like a broken record here, but Williams isn’t just giving us coachspeak when he says it — guys such as Adams and Joe Thomas can benefit now from the extra reps, in case the Bears need them to play bigger roles during the season. What I’ll be interested to see is how visible Smith will be on Tuesday at Soldier Field in front of the fans at Family Fest.

The first-team defense won the “backed up” drill against Fields and Co. — the offense started its drives on its own 1- and 3-yard lines. Safety Jaquan Brisker nearly intercepted a Fields pass intended for tight end Cole Kmet.

The injuries at receiver didn’t help the offense. On some snaps, Chris Finke, Nsimba Webster and Isaiah Coulter were Fields’ top three options. There also was a false start on the second possession.

• During a goal-to-go drill, Fields did throw a play-action touchdown to receiver Tajae Sharpe, who continues to take advantage of his reps.

• Later during a “one-minute left” situation that started on the offense’s 35, Fields briefly scrambled before hitting Webster for a long gain on third-and-10. It came two plays after defensive tackle Justin Jones earned a sack (as ruled by Eberflus) on first down. The possession ended with a 53-yard field goal by kicker Cairo Santos.

• The catch of the day was receiver Kevin Shaa’s “Moss-ing” of cornerback Lamar Jackson during the “one-minute” drill, on a pass from Nathan Peterman.

Life in the trenches

Braxton Jones appeared to practice in full, after briefly leaving practice Saturday. Eberflus previously said that Jones is “going to be fine.” The rookie left tackle did lose a one-on-one against Robert Quinn, but he played every snap with the starters in team drills.

As expected, Teven Jenkins’ work increased during his “ramp-up” period, when he returned to practice Saturday after dealing with an undisclosed injury. He saw snaps at right tackle during team drills, but with the reserves and behind Larry Borom; Riley Reiff played with the starters.

Jenkins did have one impressive snap during a team drill on the goal line. He got outside and was one-on-one against a defensive back, then helped create a hole for running back Darrynton Evans to score. Had it been a full-padded practice and fully live, Jenkins could have buried the defensive back, as he essentially carried him out of bounds.