Kompany Burnley wants a striker and bigger figuring out in assault

Before the Championship season began, Burnley manager Vincent Kompany felt he would be able to assess where his team were after the opening three games.

Huddersfield Town, Luton Town and Watford presented a stern test. After the bliss of the opening weekend victory, it has been replaced with the reality of the work Kompany and his players have ahead.

Against Watford, it was a frustrating night as Burnley fell 1-0 to Rob Edwards’ side, their first competitive defeat under Kompany. Signs suggest it may not be the last game they could or should have taken more from.

It is the second game in a row Burnley have dominated possession but failed to win. It would be easy to jump to conclusions or make sweeping assumptions, but early bumps in the road had to be expected.

When you are integrating so many new faces in such a short period of time, growing pains are guaranteed. A new system, a new style and a completely re-shaped attack; not everything is going to click instantly.

Not only are players getting used to the way Kompany wants them to operate, but they are also building connections with their team-mates; learning on the job.

It was highlighted by second-half substitute Nathan Tella. Having only signed yesterday, with Burnley pushing through the deal before the registration deadline, the Southampton loanee is still probably learning the names of his team-mates, never mind getting to grips with taking on board detailed instructions and patterns of play.

Fellow new signing Manuel Benson faced a similar situation last week, training once with his new team before the game against Luton.

While he was able to run riot last week, Watford and left-back Hassane Kamara made their intention clear from the first whistle on how they were going to handle Benson. Within the opening five minutes, the winger had been fouled and left in a heap three times, much to his and Kompany’s frustration.

This was a true welcome to the Championship for the 25-year-old and it appeared to have the desired impact, as Benson struggled to influence proceedings, being forced backwards on most occasions.

Benson is coming from the Belgian Jupiler Pro League and has not experienced English football. There was no guarantee he would hit the ground running and it is impossible to know when he will hit his best form.

Benson was not the only player to struggle. Ashley Barnes and Dara Costelloe were ineffective, with Josh Brownhill the stand-out attacker again. Vitinho’s cameo was impressive and Kompany was pleased to welcome back Jay Rodriguez from injury. Player availability has not helped the situation, with key man Scott Twine and Johann Berg Gudmundsson absent again. 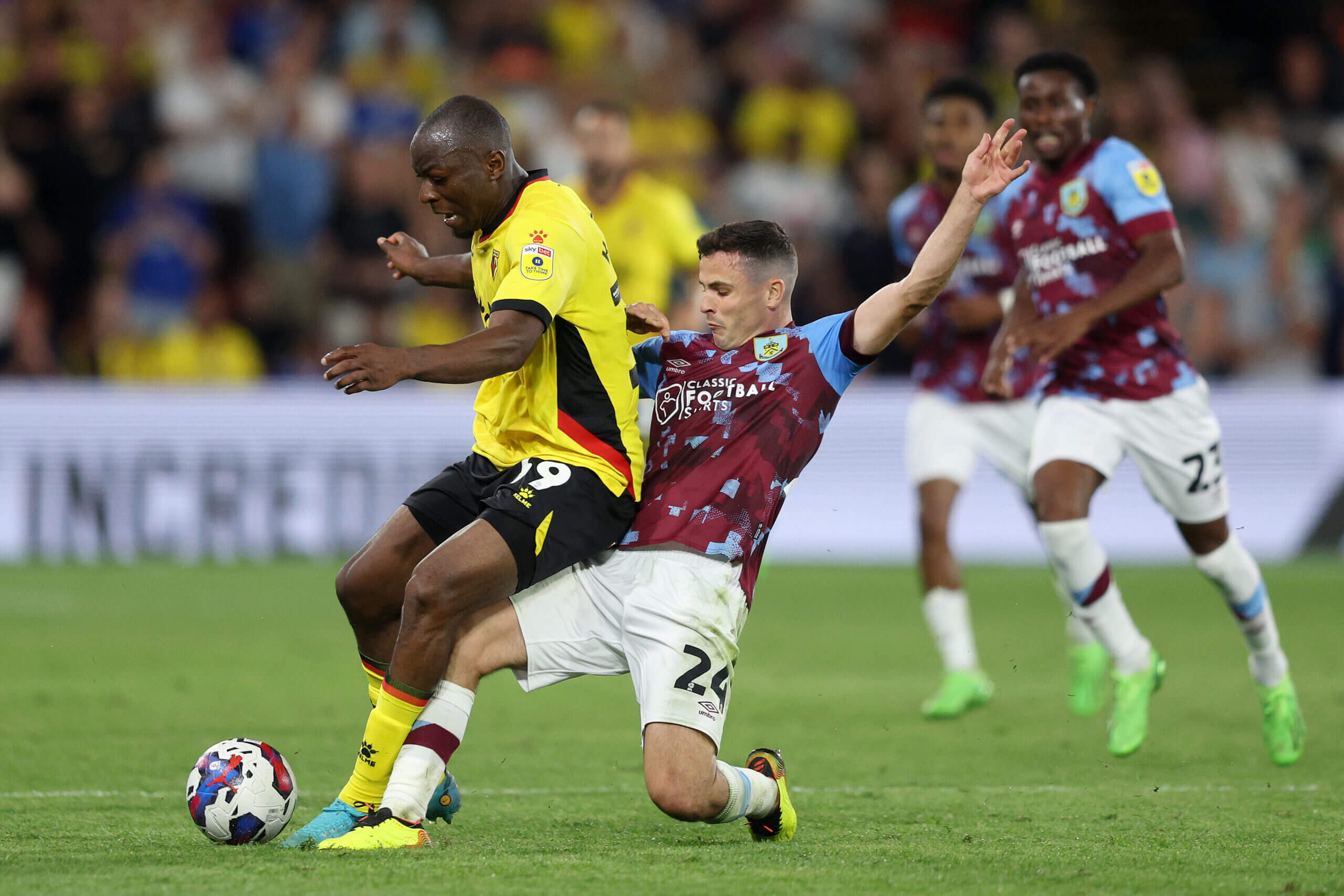 When you have new players joining the group every week and without the benefit of pre-season to form those understandings of what service team-mates want, it will look disjointed.

Only when Watford went down to 10 men with 10 minutes remaining after Kamara brought down Vitinho as he raced towards goal did Burnley begin to consistently create chances. Daniel Bachmann saved a Brownhill free-kick, then a header from point-blank range from his teammate Mario Gaspar. Tella drilled the rebound off the post but the offside flag had been raised for an earlier infringement.

Centre-back Luke McNally’s introduction up front highlighted the need for further striking options. The summer signing did make a nuisance of himself and, after Brownhill volleyed an effort off the bar, the final chance fell to the Irishman but his side-foot effort was tame.

Before that, Burnley had pressed and probed but in non-threatening areas. After being second best in the first half, they improved, dominating possession, but the ball moved too slowly. There was little threat posed to Watford’s box who dropped deeper to protect their lead, with the exception of two Brownhill chances that forced Bachmann into action.

Compare that to the defence, which continues to please Kompany. Bringing in Taylor Harwood-Bellis and Ian Maatsen during pre-season was important for that unit to gel quickly and hit the ground running.

In what is a completely new-look back five, including goalkeeper Arijanet Muric, they have looked solid and restricted opponents to few chances. He has barely had a save to make, with Burnley facing only three shots on target so far this season.

It has not been perfect. As well as some careless errors when playing out from the back, two of those shots on target have gone in and, with Burnley unable to rack up the goals at the other end, have led to four points being dropped.

The attacking problem does not go away by signing a striker, although it would help and remains a priority. They may go through the same adaptation process. Not only that, they will need to be feeding off more than one or two chances a game.

Goals are what matter. Kompany knows this and could not have been more adamant in his press conference that he believes there are goals in this team, repeating the phrase a number of times.

He believes the creativity is there, too. There is no doubting Burnley have recruited and replenished the squad with talented attackers capable of providing goal contributions. The sooner that translates onto the pitch the better.

Another new signing is close, too. Darko Churlinov is expected to join Kompany’s attacking ranks, with a deal for the Vfb Stuttgart winger in the final stages. The 22-year-old is a versatile winger who excels at dribbling and in one-on-one situations.

Whether he is signed in time to be available for Hull City on Tuesday remains to be seen, but he will have to go through that same learning process.

Kompany has preached that in every phase of play he wants his side to try to score. That is evidently still a work in progress, but that’s exactly what this team is and should be right now, but with games coming thick and fast, progress needs to be made sooner rather than later.