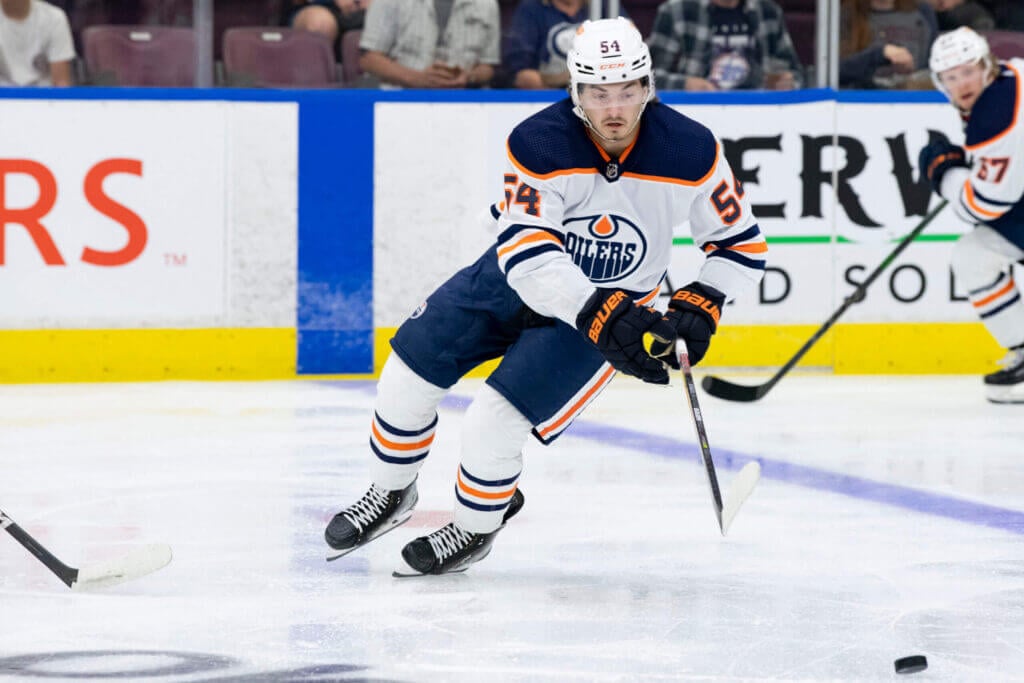 The Edmonton Oilers’ 2022-23 season as an organization got underway Friday night in Penticton, British Columbia. The team’s “young stars” played loose and there were signs of rust, but a 3-2 victory over the Winnipeg Jets’ youngsters featured several positives.

The young players with strong NHL hopes, Philip Broberg and Dylan Holloway, announced their presence with authority. Broberg played a steady game, had a couple of good offensive looks and showed calm feet defensively. Holloway had an electric chance early in the third period, played a physical game and was a key player on the winning goal.

Among the group of players considered long shots to break camp with the NHL team this fall, young forward Xavier Bourgault showed exceptional skill with the puck and good work without it. He had a point-blank chance late in the game, beating the goalie with a deke, but shot it wide of the net.

Over the last 12 months, Bourgault’s stock has been rising as he gets closer to his first pro season (which begins in October). The chatter about him reached a crescendo at the Memorial Cup in the spring, and as he prepares to enter main camp, a considerable buzz about his NHL arrival remains.

How close is he? Will Oilers general manager Ken Holland, famous for slow-playing new pro players with extended AHL time, insert his young scorer into the mix early?

Bourgault hasn’t played one game of pro hockey, so he is well down the depth chart at right wing for this year’s main camp. It’s also clear the 19-year-old has the kind of skill that will get him noticed if he gets a full look during exhibition season. Here’s the unofficial depth chart for Edmonton at right wing this fall.

Bourgault’s numbers are clear of Tyler Tullio, Edmonton’s other scoring right winger entering pro hockey in 2022-23. Dino Kambeitz is a bottom-six AHL player and Raphael Lavoie, who should be in direct competition with Bourgault, may not be ready for training camp due to injury.

Entering camp, Bourgault and Seth Griffith are the main competition for NHL time. Derek Ryan (and other depth forwards) will gobble up the fourth-line minutes, so the two hopefuls will need some luck in pushing for top-nine minutes on the big club.

It’s possible Zach Hyman plays left wing, a position he prefers, but at this point both Bourgault and Griffith would need an injury to have a legit chance at making the Oilers’ opening-night roster.

What to look for in training camp

Bourgault is 6-foot and weighs 172 pounds, according to the Oilers’ young stars tournament roster, meaning he’s bigger than Kailer Yamamoto but would still be considered undersized for an NHL winger.

He is a smooth skater, has great hands and a quick release. Oilers fans may be reminded of Jordan Eberle when watching him, in the same way Holloway looks similar in style to a young Taylor Hall.

Jordan Eberle, age 20 in the fall of 2010, played just three games during the exhibition schedule and delivered zero points. He did post three high-danger chances and drew two penalties with five takeaways.

Eberle played many of his five-on-five minutes with Shawn Horcoff, the line getting caved in shots (31 percent), expected goals (28 percent) and getting outscored 2-0 in 32 minutes.

If a young winger earns playing time in preseason games, and especially as the exhibition schedule winds down, he’ll improve his chances of making the team.

The truth is Eberle entered camp with a brilliant chance to make the team, far better than Bourgault this season. Since Holland arrived from Detroit, the team’s top prospects linger in the minors (or the press box) far longer than in previous administrations.

Unless there’s an injury that impacts the skill lines in a big way, Bourgault is likely headed to the Bakersfield Condors of the AHL. In a previous look at this player, I identified two prospect forwards who came through the QMJHL and landed in pro hockey successfully.

If we are looking for a projection on Bourgault, the two comparable players offer us a possible future, one in the AHL and one in the NHL.

If Bourgault plays a full season (72 games) in the AHL, reasonable expectations would place his goals around 30 with a point total of 66. Those are strong numbers, and it’s probable Condors coach Colin Chaulk will use him in a feature role (big even-strength and power-play minutes), making a big season more likely.

An NHL berth would exclude heavy power-play usage, and it’s unlikely Edmonton coach Jay Woodcroft would be comfortable with the young winger playing elite competition. Those tough minutes would be guaranteed if spending time with Connor McDavid or Leon Draisaitl.

Bourgault had multiple great looks as a passer and shooter Friday, and that’s likely to continue through the Penticton tournament and into the early days of preseason games against actual NHL players.

Based on the Holland approach, expect Bourgault to be one of the cuts a week or more before the NHL season, making sure the rising hopes that surrounded names such as Yamamoto and Evan Bouchard in previous preseasons are stopped in their tracks during the early days.

Once in Bakersfield, offence in the range of a point per game and goals at a rate of five a month should be expected.

The big benefit in sending Bourgault to Bakersfield comes in a possible recall. If the parent Oilers need a midseason lift and Bourgault is lighting it up in the AHL, no trade would be required, just a recall.

The audition continues through the weekend in Penticton and will be followed by a week or 10 days in Edmonton. Expect success, positive words from staff and management — and a trip to Bakersfield to begin the year.

He’s smart, skilled and on a very reasonable entry-level contract. It Bourgault writes a different script, that will be a major story in Edmonton in early October.