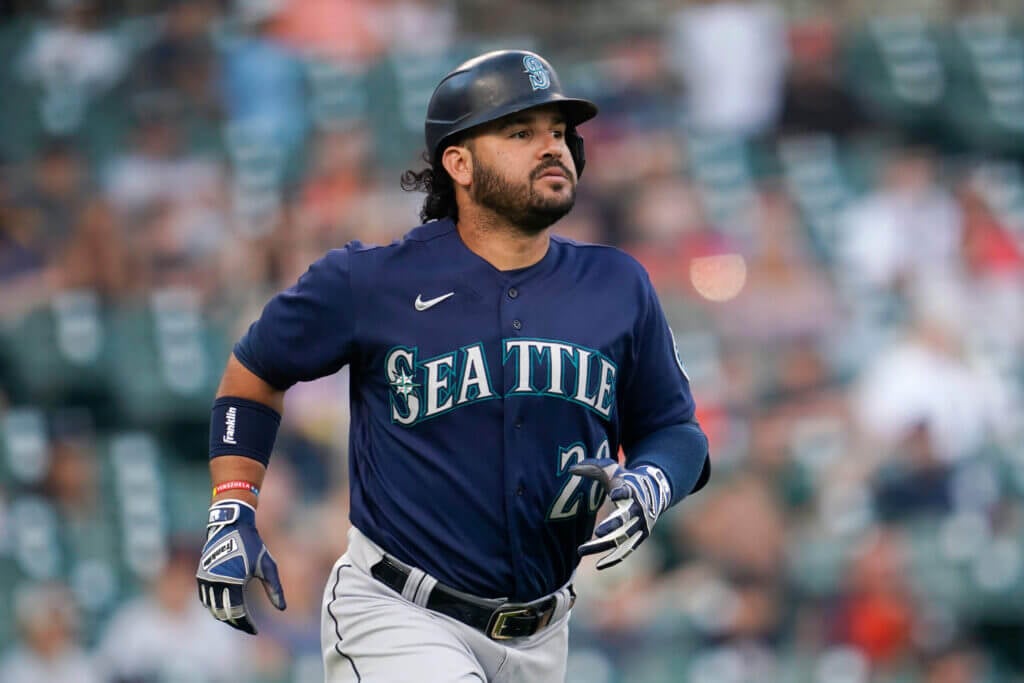 Things didn’t get much better for the Mariners a day later, as they opened their final push — 20 games in 21 days — with a loss against the Angels.

But the Mariners’ 8-7 setback on a sticky night took a backseat to something much more pressing: the health of third baseman Eugenio Suárez.

After flying out to right field to end the fifth inning, Suárez left Friday’s game with a sore right index finger, one he injured in the fourth inning when a bad hop on Luis Rengifo’s groundball hit Suárez square on the tip of the finger of his throwing hand.

Initial X-rays were inconclusive, but the Mariners and Suárez will know more about the extent of the injury sometime Saturday after the swelling goes down and Suárez — who was in visible pain after flying out — can get another scan.

“It is concerning, no doubt. … Geno has been so huge for us on both sides of the ball,” Mariners manager Scott Servais said. “He’s been awesome. He’s played all year long. He’s been so clutch, but things happen.”

Suárez, who has played in a team-best 142 games this season, expressed concern after the game yet remained hopeful it’s nothing serious.

“I want to be there to help my team and help the guys who believe in me,” he said. “But it’s a thing you don’t have control of. But hopefully I’ll be back soon.”

This isn’t how the Mariners (80-63) wanted to begin a 10-game trip to Anaheim, Oakland and Kansas City before heading back to Seattle for the last 11 games of the regular season. Having Suárez miss any length of time would be a tough blow to this group, on a lot of fronts.

Going into Friday’s game, Suárez ranked behind only teammate Julio Rodríguez in fWAR (4.8 to 4.4). Rodríguez bumped that metric Friday when he connected for a home run to start the game, his sixth home run in 13 games this month.

The Mariners put Abraham Toro at third base after Suárez left Friday’s game, and he’ll likely start there Saturday. Jake Lamb, who started in right field Friday because Mitch Haniger (sore back) was still out, is yet another option at third base.

Servais is hopeful the team will get Haniger back soon as well as catcher Cal Raleigh, who jammed his left thumb in a game Wednesday at home. Raleigh didn’t start Friday but could be back in the lineup as soon as Saturday.

The Mariners’ depth has saved them at various points this season, and that doesn’t figure to change over the final weeks of the regular season. Now more than ever they might need these guys.

“Twenty games in 21 days,” Servais said before Friday’s game against the Angels. “We need to use the entire roster. That’s how we get into the playoffs.”

Well, that and pitching. The Mariners allowed eight runs Friday, with Robbie Ray yielding five runs in five innings. Seattle’s offense nearly came to the rescue, as Carlos Santana hit two home runs, with Ty France and Rodríguez each chipping in with a long ball as well.

In the end, it wasn’t enough.

“Nineteen games to go. We’re not going to win every one,” Servais said.

Now the Mariners will wait to see the extent of Suárez’s injury and how long it might keep him out of the starting lineup.

“He’s been a huge part of (the success),” Ray said. “The power numbers, 30 homers, and he’s one of the most solid third basemen I’ve seen this year, making tough plays look routine. He’s brought his whole game together. He means a ton to this team.”