Home NEWS Mets wanted Max Scherzer for moments like these, and he delivers as they clinch a playoff berth

Mets wanted Max Scherzer for moments like these, and he delivers as they clinch a playoff berth 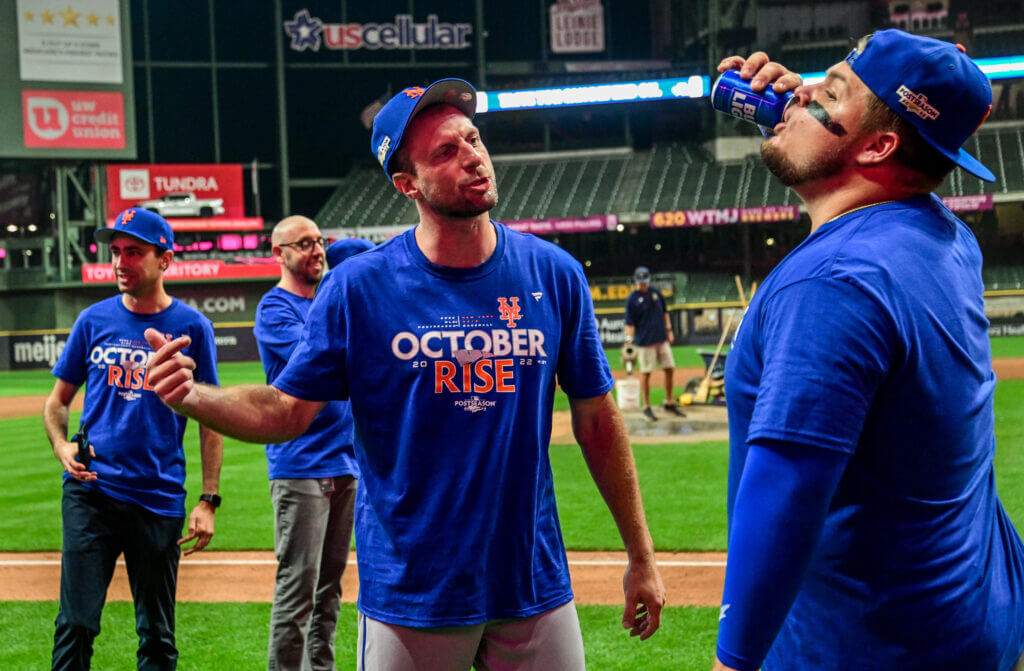 MILWAUKEE — With a burly and gold Ace of Spades bottle of champagne in his dependable right hand, Max Scherzer filled each of his rotation mates’ glasses without spilling a drop. With every pour, a player nearby inside a celebratory Mets clubhouse shouted, “We’re not done!” Another would add loudly, “First step!”

For the first time since 2016, the Mets on Monday night celebrated making the playoffs after a 7-2 win over the Brewers made things official. Appropriately, they got six perfect innings from Scherzer, the player they signed last offseason to a record contract to help transform their franchise. Veteran Brandon Nimmo called the gap years between postseason trips “hard-fought,” but so many darker adjectives also apply. Now — under a fresh owner with a new person in charge of the front office, a new manager and a new leader of a veteran clubhouse in Scherzer — that’s over.

As owner Steve Cohen walked around the clubhouse holding a champagne glass nearing empty, he congratulated players, thanked them and told each one, “It’s a start.” When Cohen reached Nimmo, the only position player remaining from that 2016 group, the center fielder stopped him. Nimmo told Cohen, “It’s a start, but it’s an important start.”

“It’s the first step, but it’s the most important because you have to get in, you have to give yourself a chance,” Nimmo said. “It’s been six years since I’ve gotten to the playoffs. I definitely appreciate it.”

The mood around the Mets and beyond, stretching to their fan base, reflected that perspective. It’s been a while. Advancing to the postseason was worth celebrating, of course. For New York, it’s been a long handful of years. Before a prolonged search landed on Billy Eppler last November, the Mets had cycled through eight men serving, at least partly, as their GM since 2016. Buck Showalter is their fourth manager since 2016. Off the field, there had been several embarrassments. The field was no escape; they’d had one winning season since 2016, a time so long ago that David Wright and Jose Reyes were appearing in meaningful games.

As a playoff clincher, the Mets’ win Monday was fitting. It was so Mets. You know, the 2022 version, not to be confused with how that phrase would be sarcastically uttered in the past or “LolMets,” as someone might have said last year or so many of the other previous years. No, these Mets are good.

It was the kind of win the Mets built their season on.

At their best, like Monday night, they whittle down even the great starting pitchers. They tallied five earned runs against the reigning NL Cy Young Award winner, Corbin Burnes, knocking him out of the game with two outs in the sixth inning. The Mets did it their way, taking the lead early with a three-run home run from Pete Alonso after Francisco Lindor singled to the opposite field and Jeff McNeil squeaked a grounder through the shift and by an out-of-place defender. Timely hits, taking advantage of mistakes. Those qualities have helped the Mets to a 94-55 record.

So has good pitching.

Before the game, Showalter said Scherzer wouldn’t pitch deep. He’d thrown just 59 pitches in a rehab start and hadn’t pitched in a major-league game in 16 days after left oblique irritation landed him on the injured list. Knowing what his manager had said, Scherzer did what he has done several times already this season, whether it has meant pitching well in big games, saving a taxed bullpen or playing stopper. He maximized. He stepped up. He threw more fastballs than usual, filled up the strike zone and saved his high velocity for his final innings. Of the 18 batters he faced and retired, half were on strikeouts. He threw just 68 pitches, 47 for strikes.

By the fifth inning, he was pining to stay in longer, telling Showalter, “You gotta let me go back out.” But by the end of the sixth inning and knowing he wouldn’t be able to — and shouldn’t be able to — go longer, Scherzer was content with his night’s work. Physically, he was feeling fine. He put his team in position to win and, in his words, executed all of his pitches.

After the sixth inning, Scherzer walked down the Mets’ dugout, high-fiving a line of his teammates. As he picked up his pace, his smile was wide, lighting up his eyes. For six perfect innings, the pattern was mostly just throw a strike, get a new ball, repeat. He wasted no energy on outward emotion. Now, it was all coming out. By 8:25 p.m., Scherzer, ever the perfectionist, was in his happy place. One hour later, things got even better.

With two outs in the ninth inning, it finally hit Showalter that the Mets were really about to clinch. In explaining the fine line between knowing there are bigger things at stake and wanting to appreciate getting to the postseason first, Showalter said, “I loved watching the guys feel what they deserve to feel.”

There was no mob scene on the field after the final out. There was no spraying of champagne. It was a classy celebration, Francisco Lindor said, featuring a long table in the middle of the clubhouse with glasses of bubbly for the taking. Subdued was how Pete Alonso put it, deadpan, but the ketchup and mustard stains on his shirt and neck told a slightly different story. Regardless, the celebration clearly wasn’t anything over the top. There’s a reason for that. Despite the win, the NL East standings at the end of Monday night looked exactly the same. With 13 games left, the Mets have just a one-game lead over the Braves. They hope to be celebrating a division title.

But Monday, as Scherzer kept filling glasses, players and coaches kept repeating the same mantras: First step, a start. In the middle of it all with his blue cap turned backward was Scherzer, carrying the bottle the team presented him for his 200th career victory, which coincided Monday night with the playoff berth.

These are the kind of nights that explain why, two hours into his tenure, Eppler was on a call with agent Scott Boras. They talked about a handful of players. But both men knew the point of the conversation was Scherzer.

“He brought an experience of winning,” Nimmo said. “And that’s important. He’s contagious to be around.”

Early into the clubhouse celebration, it was time to take a team picture on the field. The last one out of the clubhouse was Scherzer. He had just gotten out of the shower and was still getting dressed. Trailing the pack of players, he didn’t bother to throw on any shoes. He felt the need to hurry, not keep his teammates waiting. As a result, his bare foot got caught in his pant leg while he was walking down the first dugout step. He quickly righted himself, kept going and joined his teammates on the field. An inconspicuous misstep. Otherwise, he was perfect.