Brighton and Hove Albion’s club-record sale of Marc Cucurella to Chelsea, a transfer worth over £60million including add-ons, could eventually be eclipsed if Moises Caicedo carries on performing the way he is.

Of course, Brighton have no intention of losing Caicedo before developing him the way they did Yves Bissouma, the defensive midfielder who was with them for four years before going to Tottenham Hotspur in June for a fee that could rise to over £30million ($36m).

But the manner in which he bossed the midfield, at just 20 years of age, in Sunday’s 2-1 victory over Manchester United at Old Trafford was a further indication of the prodigious talent Brighton have on their hands in the Ecuador international.

The dubious quality of an opposing midfield featuring Scott McTominay and Fred is a matter for debate, especially as United were one of many clubs at home and abroad monitoring Caicedo when Brighton beat them all to the punch in the January 2021 transfer window, signing him from Independiente del Valle in his homeland for less than £4.5million.

Although his impact so far for Brighton is based on a small sample of just nine league games, they include wins home and away against United by a combined score of six goals to one (and that was an own goal), away victories over Arsenal and Tottenham, and beating another of last season’s European qualifiers, West Ham, 3-1 at the Amex Stadium.

He has also established himself as a high-level performer across 23 appearances for his country over the past two years.

Caicedo has become an integral part of the young side coach Gustavo Alfaro will lead to the World Cup in November after finishing fourth in South American qualifying with results that included draws against Brazil and current Copa America champions Argentina and a 4-2 victory over Uruguay, who came third.

Alfaro had enough confidence in the then 19-year-old to give him a man-marking job on Lionel Messi on his international debut in October 2020. Messi scored, but only from the penalty spot, as Argentina earned a 1-0 home win.

The Ecuador manager — who had a year in charge of Argentine giants Boca Juniors in his homeland before taking his current job and at 56 is into his fourth decade of senior-level coaching — reckons Caicedo “will turn into a world-class player”.

Journalist and South American football expert Simon Edwards, speaking to The Athletic when Brighton originally signed Caicedo, said: “If he was Brazilian, he would be £50million-plus.”

And now there is the prospect of the first comma on the price Brighton paid for Caicedo being moved one number to the right. The feeling inside the club is he has the attributes and temperament to become a better player than Bissouma.

Caicedo, speaking in 2020, months before joining Brighton, said: “My dream is to play for Manchester United.”

They must be kicking themselves after the way he’s performed against them twice now in the space of three months, especially when he opened the scoring in that 4-0 thumping at the Amex in May. 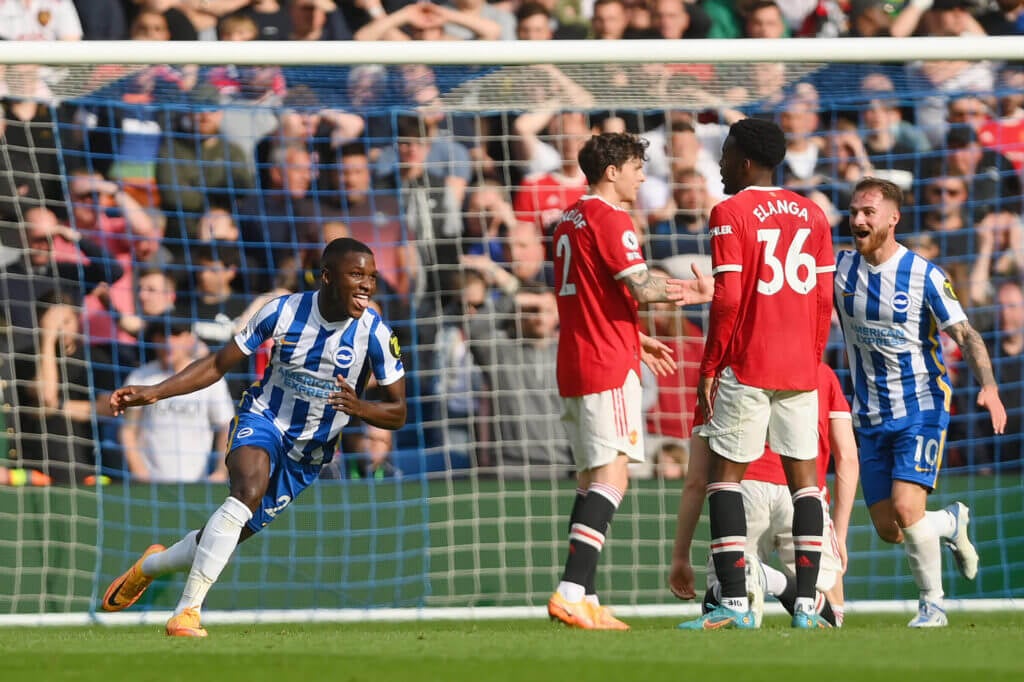 That was his first and so far only goal in English football — a low drive from 20 yards that already has him within two of the total Bissouma scored in 112 Premier League appearances for the club.

It’s difficult to make direct comparisons because although both are midfielders, they are different players and have been used by head coach Graham Potter in different ways.

Potter crafted Bissouma into an accomplished shielder of the defence, often in isolation as Brighton’s deepest midfielder. Although he had Caicedo alongside him against United three months ago.

With Bissouma gone to north London, it’s now Caicedo and Argentina international Alexis Mac Allister as a deep-lying duo in the centre of the park.

Caicedo’s attributes on the left of that double pivot, on and off the ball, were showcased at Old Trafford. He combined with Pascal Gross down the left for both the German’s well-crafted goals.

Data from FBref showed Caicedo ranked highly in possession, with 29 completed passes out of 36, ahead of partner Mac Allister (26 of 31) and behind only Adam Lallana (34 of 39).

Even when an early McTominay tackle left him writhing on the floor and clutching his left ankle — referee Paul Tierney gave McTominay a lenient yellow card — it didn’t sabotage Caicedo’s competitive instincts. Opta stats show he made four tackles, the most by any player on the pitch.

Caicedo is also a versatile player. For Independiente, he was sometimes deep, sometimes advanced. At international level, Alfaro uses him primarily on the left of a midfield trio in a 4-3-3.

Potter also deployed him in that way on his Brighton debut, with Bissouma and Enock Mwepu, in the 2-1 win at Arsenal in April, then again with Bissouma and Gross in the 1-0 away defeat of Tottenham a week later.

As well as playing his part in the moves for both Gross’ goals at the weekend, Caicedo already has an assist to his name — it was his cross that set up Mwepu’s cracker against Arsenal.

He is athletic, can tackle, can pass, and can go from box to box. Off the field, he’s quite reserved and respectful but very popular with his team-mates and club staff.

Caicedo has no obvious flaws, apart from his relative inexperience and age — he turns 21 in early November. Young players can be susceptible to inconsistency and dips in confidence if things start to go wrong.

”He’s a fantastic kid. With young players, you just need them to play more games, not put too much pressure on them. But we enjoy working with him.”

Potter will have that enjoyment for a good while yet at Brighton, but there are no boundaries to what Caicedo can achieve in the future.

He may one day even scale the heights of his idol, N’Golo Kante.