Home NEWS Penn State and NIL: Where do Nittany Lions stand and what are coaches saying? Penn State and NIL: Where do Nittany Lions stand and what are coaches pronouncing? 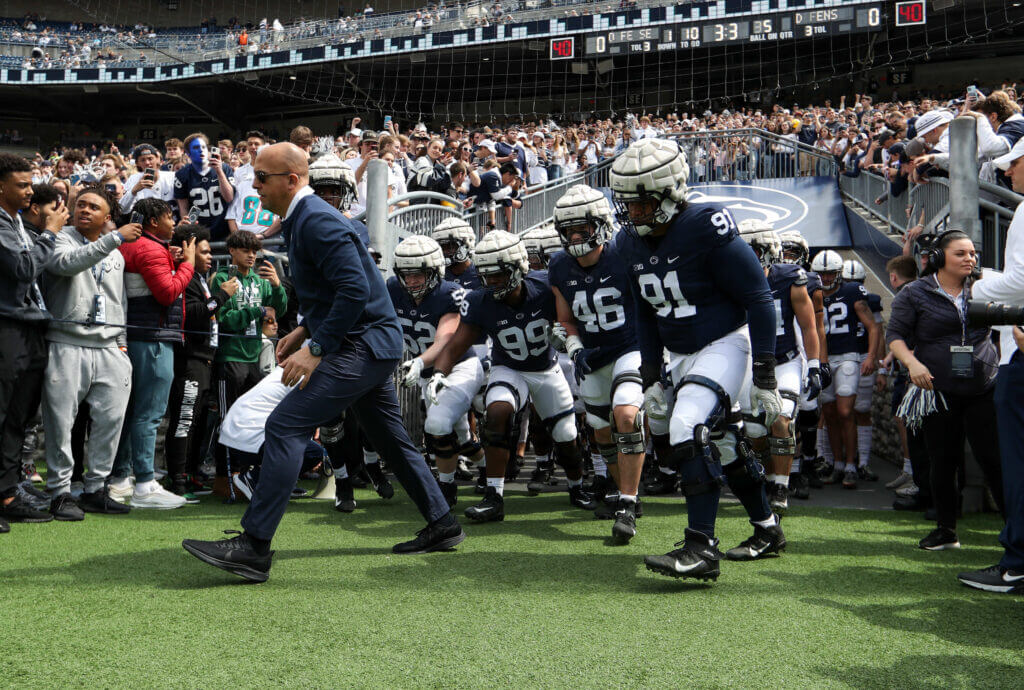 STATE COLLEGE, Pa. — Conversations between recruits and Penn State’s coaches have taken a bit of a turn in the past year. With name, image and likeness opportunities giving athletes a chance to put money in their pockets, it’s become an unavoidable part of the recruiting process.

“It’s coming up,” said running backs coach Ja’Juan Seider. “We’ve been blessed here at Penn State that it hadn’t come up much. It’s starting to inch its way in. … We talked to a few kids, and I can’t say names, but they say, ‘This school is giving me this and that,’ and you have a conversation. ‘Did you sign your name on it? So is it a contract or is it a fake promise?’ And you’d be amazed how much they’re taken back like, yeah, you’re right.”

In late July, James Franklin was scheduled to be at the Avalon Yacht Club in New Jersey for an evening with Penn State donors, according to a brochure obtained by The Athletic. The invitation-only event was centered around NIL efforts, including what those in attendance could do to help and what Penn State’s competitors are doing in the NIL space.

It’s no secret Penn State is behind in NIL. Franklin and new athletic director Pat Kraft have said as much.

“If we want to compete with the schools, not only in our conference, but also nationally, then we must be willing to do similar things. You can’t have it both ways,” Franklin said during Big Ten media days. He was responding to question about Ohio State coach Ryan Day saying in June that $13 million was the amount necessary to keep his Ohio State roster intact.

“The commitment must match the expectations and vice versa,” Franklin said.

Making a BIG splash in the NIL era 💦

Several football players have deals with local restaurants, car dealerships and other businesses. Quarterback Sean Clifford has his own agency, Limitless NIL, to help athletes navigate the NIL space and counts several of his teammates as clients. Safety Ji’Ayir Brown, one of Clifford’s clients, recently had furniture delivered as part of an NIL deal with a local company. This summer, freshman running back Nick Singleton, a five-star recruit, signed what is believed to be a significant, multi-year deal with a home remodeling company in Mechanicsburg, Pa. Details of it have not been disclosed.

Kraft added that Penn State is heading in the right direction and has expanded the educational component of NIL to help coaches and athletes better understand where to go and what they can and can’t do.

Both of Penn State’s football recruiting coordinators, Taylor Stubblefield and Terry Smith, said they try not to harp on NIL during recruitments. But when it comes up from a parent, a high school recruit or a transfer portal target, they have to answer the question. Stubblefield said he knows players in his wide receiver room have NIL deals, but he doesn’t know or care how much money they’re making.

“I know we are trying to be as aggressive as we can be within the rules,” Stubblefield said.

“Play better. The elite guys get deals and then it’s easy,” Smith said. “That’s for our head coach and the administration to figure that stuff out. We just go out and recruit guys as if we don’t have anything, and if something shows up, that’s icing on the cake. It makes it easier.”

Kraft said Penn State is working on group licensing, which would allow players to make money off their jerseys and T-shirts. Through the Success With Honor collective, players have signed autographs and made appearances around town.

When defensive end Chop Robinson, a former top-100 recruit, entered the transfer portal in the spring after spending his freshman year at Maryland, he said just about every school reached out to him. It could’ve easily become a bidding war for collectives. Robinson said he came to Penn State without promise or expectation of an NIL deal.

“My main focus was football,” Robinson said. “I’m not really an NIL guy. The money will come eventually (if you play). My main focus is football and just winning and getting better as a player.”

While Penn State works to figure out NIL — something Franklin said it didn’t do quickly enough — the reality is catching up won’t be easy. Making sure Penn State doesn’t tap out its own fan base by relying on the same donors is a challenge all schools face. Penn State has to keep working and hoping the massive alumni base and other businesses step up while coaches continue to navigate an altered recruiting landscape.

“You’ve got to keep being you and every now and then you find some diamond in the rough,” Seider said. “At the end of the day, it’s all gonna balance out. I say, ‘Listen, we play in Beaver Stadium. We have 107,000 fans (in Beaver Stadium).’ I think when NIL really gets going and we’re all figured out, Penn State should be OK in this game of NIL.