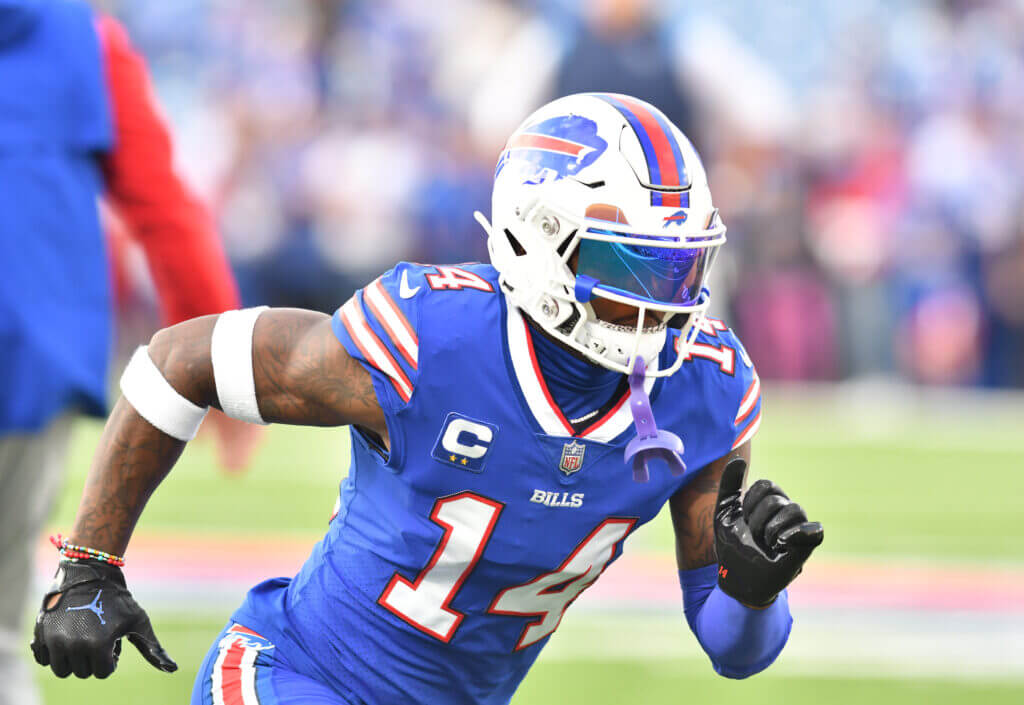 Allen threw for 317 yards and four touchdowns before Case Keenum entered the game in the fourth quarter with the Bills up by 34. It was Allen’s 15th career 300-yard game, tied for second-most in Buffalo history, and he matched his career high of four touchdown passes.

Allen connected with receiver Stefon Diggs for three of the touchdowns, also tying Diggs’ career high. Diggs — who racked up 148 yards — is the first player since Steve Smith in 2007 with at least 250 receiving yards and four receiving touchdowns in his team’s first two games of the season, per ESPN Stats and Info.

The otherwise raucous Buffalo crowd quieted during a scary moment late in the first half when Bills cornerback Dane Jackson was taken off the field in an ambulance. Jackson took an accidental hit to the head from teammate Tremaine Edmunds and was taken to a local hospital to be evaluated for a neck injury. The team said Jackson has full movement in his extremities.

Tennessee quarterback Ryan Tannehill threw for 117 yards, zero touchdowns and two interceptions. His night ended with a pick six late in the third quarter, after which he was replaced by rookie quarterback Malik Willis.

How were Allen and Diggs able to be so dominant?

Buscaglia: With the Titans down their top boundary cornerback in Kristian Fulton, Allen and Diggs went into attack mode and were relentless all game. Regardless if the Titans were in man or zone, Allen was winning on his routes and finding soft spots with room to roam. And with the Titans unable to get sustained pressure on Allen, all the Bills quarterback had to do is go through his reads and wait for Diggs to pop open. They could not be stopped Monday.

How was the Buffalo defense able to shut down Tennessee?

Buscaglia: Even with the Bills down two of their top four defensive tackles, they had a major advantage over the Titans’ overwhelmed offensive line. Winning up front was the key to slowing down running back Derrick Henry, and the Bills did just that. Without the threat of a running attack, the Titans’ usual play action prowess lacked effectiveness, and they became predictable to defend. Middle linebacker Tremaine Edmunds did an excellent job of getting to the line of scrimmage and thwarting the run.

What to make of Tannehill’s performance and Willis’ debut

Rexrode: As Mike Vrabel said after the game, to no one’s surprise, he took Tannehill out along with Derrick Henry and a few other starters to keep them healthy and let the young guys get some work. Though Tannehill had a brutal pick six right before he was pulled, there is zero quarterback controversy in Nashville. It was good for the Titans to get Willis some reps in a real game, but this is a redshirt/see if he can be ready by 2023 situation. Now, if the Titans’ season circles the drain at some point, that’s when Willis may see more action.

Rexrode: The Titans first need to figure out if they’re going to be able to field a competent offensive line, and that will be very difficult to do if Taylor Lewan (knee) is out for an extended period. They should be fine defensively — at least unless they have to see Josh Allen and the Bills in a postseason that seems distant right now. But the offense needs to lean in heavily on getting rookie receiver Treylon Burks going. They need Austin Hooper and the tight ends more involved. And they need to keep trying to find out if Derrick Henry can regain his form. This team has very little hope if he can’t.