Home NEWS Texas A&M found a way to beat Miami, but Jimbo Fisher’s offense must improve in these 3 areas

Texas A&M found a way to beat Miami, but Jimbo Fisher’s offense must improve in these 3 areas 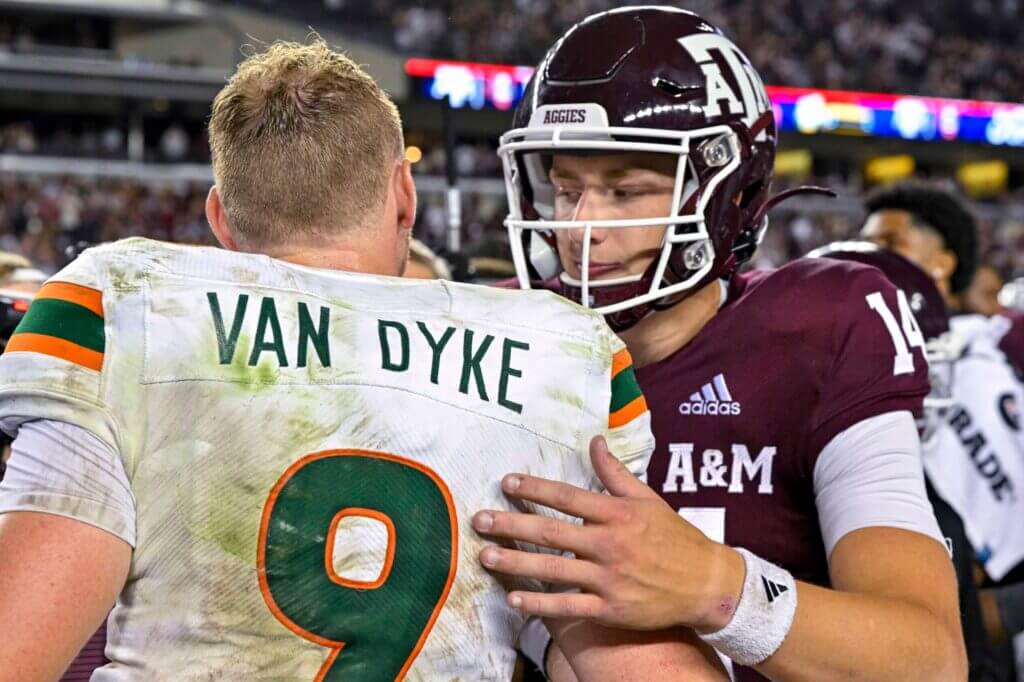 COLLEGE STATION, Texas — There’s no such thing as an ugly win in Jimbo Fisher’s mind.

Asked about the notion after Texas A&M’s 17-9 win over Miami late Saturday night, the second straight game in which the Aggies failed to reach 300 offensive yards, Fisher, arms crossed, shook his head.

“How is it ugly?” Fisher said. “Just because you play complementary football, you do the right thing, you don’t turn the football over, you make the plays you gotta make to win the game? That’s what winning football does.”

After a stunning Week 2 upset home loss to Appalachian State, the Aggies were happy to take a win any way they could get it, particularly over a ranked Power 5 team. A&M’s defense played well, its special teams blocked a field goal and new starting quarterback Max Johnson took care of the ball, committing zero turnovers.

But SEC play begins this week for the No. 23 Aggies against another ranked team, No. 10 Arkansas, on Saturday at AT&T Stadium in Arlington, Texas. It begins a four-game stretch away from Kyle Field, all against league competition, highlighted by a road trip on Oct. 8 to Alabama. If A&M is to find any success in the next month-plus, its offensive production must get better.

Johnson provided a boost with his ball security, pocket awareness and management of the offense, but his final line was pedestrian: 10-of-20 passing for 140 yards and a touchdown. Running back Devon Achane had his most productive rushing performance of the season (18 carries, 88 yards) and finished with an encouraging 130 total offensive yards. But the Aggies must progress in three key areas: offensive line play, tight end production and downfield passing.

The Aggies have been inconsistent up front. Through three games, Texas A&M running backs averaged only 1.18 yards per rush before first contact from a defender, according to TruMedia. That ranks 101st in the FBS. Defenders are getting to the ball carrier early and often.

It’s a steep drop from the past two seasons, when the Aggies averaged more than 2.2 yards per rush before first contact and ranked in the top 30 nationally.

In the passing game, the Aggies have allowed quarterbacks to be pressured on 34.5 percent of dropbacks, which is 98th in the FBS and 12th in the SEC, according to TruMedia.

On the fourth play of the drive, right tackle Reuben Fatheree II lunged forward but missed a block on Miami defensive lineman Leonard Taylor III, who tackled Achane for a 1-yard loss to set up second-and-11.

Taylor got around Foster to slip into the backfield on the next play, but Achane, after taking a handoff out of the pistol formation, sidestepped Taylor, broke a tackle from another defender and darted through space created by terrific blocks from Fatheree and Robinson to gain 13 yards.

The next play was the best of the drive for the A&M front. Left guard Aki Ogunbiyi and tight end Donovan Green opened a hole with two perfectly executed pull blocks, stonewalling defensive lineman Jahfari Harvey and linebacker Waynmon Steed Jr. Achane sprinted through untouched and gained 17 yards to the Miami 40.

With A&M gaining momentum, Miami defensive lineman Jared Harrison-Hunte shed Ogunbiyi to corral Achane for a loss of 2. On second-and-12, Johnson had pressure in his face as he released an incomplete pass, despite Miami rushing onlybfour. On third-and-12, Johnson had good protection, but coverage was tight and his pass attempt to Chase Lane was well defended, leading to an A&M punt on fourth down.

What looked like a promising drive destined for points stalled at the 42 partially because of breakdowns up front. The Aggies had five combined second and third downs of more than 10 yards on that series.

Of course, no offensive line is going to pitch a perfect game and Miami has a talented defensive front. The Hurricanes deserve credit, too. But as the Aggies head into SEC play, they’ll see deep, productive defensive fronts consistently, magnifying the need to clean things up.

So far the Aggie tight ends have been banged up and, when available, largely quiet in the passing game.

Tight ends have been among the team’s top three pass catchers in each of Fisher’s four A&M seasons and have led the team in receiving yards twice and catches twice. Texas A&M put at least one tight end on the field for 91.8 percent of its snaps in the past three seasons, according to Pro Football Focus. Jalen Wydermyer, a two-time Mackey Award finalist and three-year starter, left for the NFL Draft after 2021.

Through three games in 2022, the Aggies are missing that strong over-the-middle presence tight ends typically provide.

The result is a much less prevalent tight end presence: The Aggies have had at least one tight end on the field for 100 of 157 plays (63.7 percent) according to TruMedia. That’s a 28.1 percent drop from the past three years.

Even when they’ve been in the game, production is limited. Green caught one pass for 18 yards versus Miami, but it was the only time Johnson targeted him. Per TruMedia, A&M tight ends have been targeted just four percent of the time in the passing game this season, a nearly four-fold drop from recent years. From 2019 through 2021, Texas A&M targeted tight ends on 19.1 percent of pass attempts per PFF.

Before the season, Fisher emphasized the need for the Aggies to improve their downfield passing game. That’s why the arrival of five-star receivers Evan Stewart and Chris Marshall was celebrated. Their additions could help A&M stretch the field.

So far, downfield success has been limited. On throws of 10-19 air yards, A&M quarterbacks are 8-for-15 for 127 yards, no touchdowns and one interception, according to TruMedia. Their passing efficiency of 111.1 on those throws ranks 107th in the FBS.

On throws of 20 or more air yards, the Aggies are 4-for-11 for 193 yards, three touchdowns and an interception. But all three of those touchdowns came in a season-opening win over Sam Houston, an FCS foe.

Both Stewart and Marshall missed Saturday’s game because of suspensions (Fisher indicated after the game it was for a violation of team rules, which also led to defensive back Denver Harris and Smoke Bouie’s absences). They were certainly missed.

A&M’s line play also factors in, as it’s difficult to have consistent downfield passing success if quarterbacks don’t have sufficient time to throw.

“If you’re not protecting, you can have Jerry Rice running down through there (and it won’t matter),” Fisher said.

The Aggies struggled throwing downfield last season, and it contributed to an up-and-down season in conference play.

In 2021, the Aggies finished in the bottom 35 nationally in completion percentage (43.6), yards per attempt (9.3), touchdown-to-interception ratio (11-10) and passing efficiency (132.7) of throws of 10 or more yards downfield, according to Pro Football Focus. They performed better on 20-plus yard throws but still finished no higher than 45th nationally in any of those categories.

None of these issues are likely to be solved quickly. Meanwhile, the Aggies may have to lean on their defense to continue carrying the load for them in the near future.

“When you’re pitting guys back on the 1 or 2-yard line, it makes it easy for a defense to win,” he said. “I thought we played very opportunistic and won the field position battle to win the game.

“Good teams find a way to scratch it out. We’ve got to get a lot better, but we found a way to do it.”