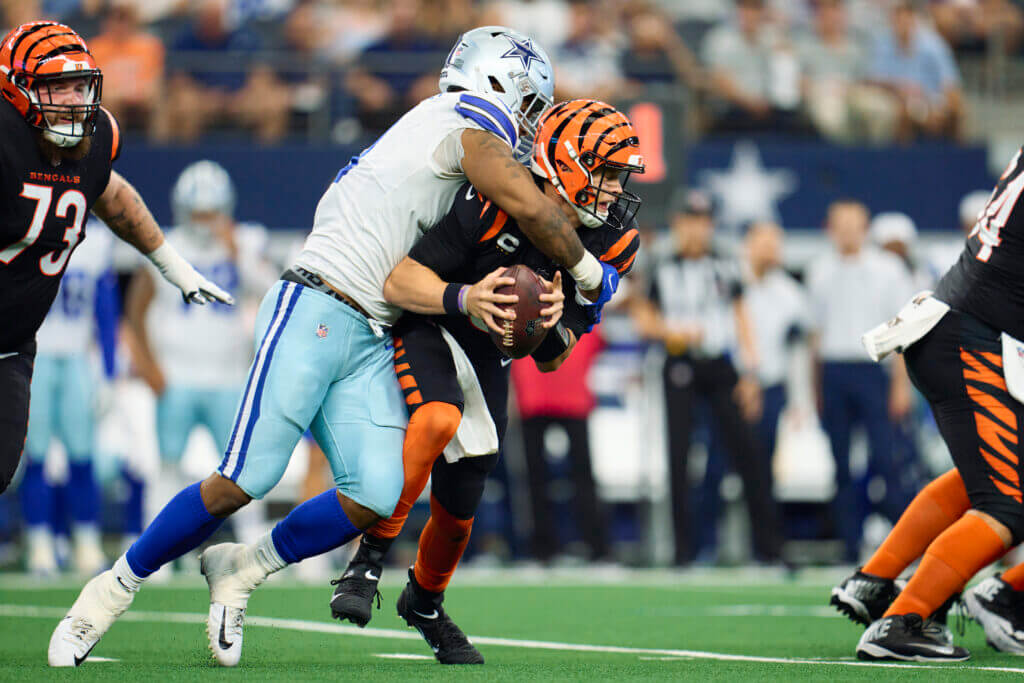 ARLINGTON, Texas — As Micah Parsons jogged off the field after Sunday’s 20-17 win over the Cincinnati Bengals, several loud cheers could be heard coming from inside the Cowboys’ locker room.

It sounded like a more emotional postgame gathering than usual.

“All the whispers,” Parsons said when asked about that emotion, “the Dallas Cowboys this, the Dallas Cowboys that. But we just bought into each other and said eff what everybody else thinks, this is about us. And I think we came out here and proved that.”

The Cowboys were not expected to win this game. They entered as a touchdown underdog. Their franchise quarterback, Dak Prescott, was in street clothes, his throwing hand covered in a protective brace following a Monday thumb surgery. Even with Prescott, the Cowboys looked like one of the NFL’s worst teams the previous Sunday night in a 19-3 loss to the Tampa Bay Buccaneers.

Without him, backup Cooper Rush got his second career start against a Bengals team that played in last season’s Super Bowl. An 0-2 start looked likely for Dallas.

But Rush played big early, leading the Cowboys on consecutive touchdown drives to start the game. It marked the first time that has happened since Week 7 of the 2019 season against the Philadelphia Eagles. After one quarter, Rush was 7-of-9 passing for 116 yards, one touchdown and a 155.8 passer rating. The Cowboys led 14-3.

Rush’s favorite target was wide receiver Noah Brown. The two connected on Rush’s first-quarter TD pass, a 9-yard completion as Brown moved left to right in the back of the end zone. It was not only the first score of the game, it was Dallas’ first touchdown of the season. Brown finished with a game-high 91 yards on five catches. No. 1 wide receiver CeeDee Lamb had a better showing than in Week 1, finishing with seven catches for 75 yards on 11 targets.

“They had a different style,” Lamb said of the Bengals’ defense compared to what he saw from the Buccaneers last week. “They tended to bracket me a little bit, as you can see, got a couple of incompletions from the linebacker buzzing underneath me on the stop route. Every now and then, you just got to work our matchups.”

The offense sputtered after those first two scores, managing only a 54-yard field goal over its next seven possessions. But with the game tied at 17-17 and only 57 seconds remaining, Rush completed three consecutive passes to Lamb, Brown and Lamb again, setting up Brett Maher for the 50-yard game-winner as time expired.

“You do go out there expecting to make every kick,” Maher said. “I feel like I’m in a good rhythm right now. (Long snapper Jake McQuaide and holder Bryan Anger) are absolutely money on the operation. They gave me a great look at it.”

Despite it being his second game-winning drive in as many starts, Rush’s demeanor never seemed to change on the field. He showed a similar demeanor after the game, making it difficult to tell if the Cowboys had won or lost. At one point, a reporter asked if he was excited and happy.

“Yeah, definitely,” Rush said with a laugh. “Winning an NFL game is a lot of fun.”

“We already understand that Cooper Rush is definitely ready to step in and handle the opportunity that has revealed itself,” Lamb said. “He showed it plenty of times. … It’s not too big for him. He’s been in this situation. For him to come through again, that’s Cooper Rush for you.”

The Cowboys need Rush to keep it up for at least a few more games. Prescott’s injury was originally expected to sideline him six to eight weeks. After the surgery, the Cowboys believe that timeline is closer to four weeks. During the CBS broadcast, sideline reporter Tracy Wolfson said Prescott told her before the game that he expects to be back even earlier than four weeks. She added that he said the swelling is down and he has movement in the thumb.

There could be some more immediate offensive help on the way as soon as next Monday night against the New York Giants. Starting wide receiver Michael Gallup is close to returning. He worked in full pads last week for the first time since his season-ending knee injury in January.

Dallas should be in good shape until Prescott returns if its defense can play as well as it did against the Bengals. Star quarterback Joe Burrow was sacked six times Sunday — two by Parsons, two by defensive end Dorance Armstrong and one each by defensive end Dante Fowler and linebacker Leighton Vander Esch. Burrow was also held below 200 yards passing and only one touchdown. Starting running back Joe Mixon managed only 57 yards on 19 carries.

“We have great confidence in our pass rush and the depth of it, too,” said Cowboys coach Mike McCarthy, who improved to 6-1 in his head coaching career following a season-opening loss. “You go to the third-and-10, do you take the penalty there? I’ll take third-and-10 with our favorite package versus that matchup any day. That’s just how we feel about it. They did a nice job in the second half, with the chipping. They were able to stymie us some. That’s a big part of why we have so many defensive linemen on this team. We have great belief in our pass rush.”

Parsons has four sacks in the first two games and 17 in his first 18 career games, an NFL record, dating back to 1982 when sacks became an official stat.

“I don’t care what the offense puts up,” Parsons said. “They can have zero (points), but we got to do our part. I think we’re doing a damn good job at doing that. We’ve held two of the most elite offenses to one touchdown the last two games and we’re making them earn every little bit of it. That’s how you be relentless. That’s what we’ve been preaching. Every guy in this room has bought in.”

Crown him the 👑! @MicahhParsons11 with another sack!

“One lion can’t do it by himself,” Parsons said. “You need a pride. If there are 10 hyenas and one lion, the lion is liable to lose. But the fact that I got 10 other guys out there that I feel I can rely on, that’s what makes this boat go.”

Last week, Bengals star wide receiver Ja’Marr Chase told reporters that Diggs is “not too much technique-sound” and “a little hit or miss.”

Diggs didn’t shadow Cincinnati’s No. 1 wide receiver, but he was on him often. Chase, who had 10 catches for 129 yards and a touchdown last week, was targeted nine times, totaling five catches for 54 yards Sunday.

Diggs also arguably made the play of the game, tackling receiver Tyler Boyd in the flat and holding him to a 1-yard gain on third-and-3 with just over a minute remaining.

“The drive before I had given up a catch,” Diggs said. “I was kind of mad about that. I wanted to go out there and make a play for my team. I just went and did that.”

“That was huge,” Parsons added. “We even said that’s the hardest we’ve ever seen Diggs tackle. He shot out like a cannon. I was proud of him. When I saw No. 7, I was shocked. That was huge.”

The NFC East appears to be stronger than it was a year ago. Washington lost Sunday, falling to 1-1, but the Giants improved to 2-0. The Eagles (1-0) play Monday night. Three of Dallas’ next four games are against those three opponents. Prescott likely will miss at least two of those and maybe all three. The Cowboys were given hope Sunday that Rush and company are capable of winning all three. That wasn’t exactly the outside belief before kickoff.