BLACKSBURG, Va. — Cole Nelson was greeted by a way-too-early wake-up call from Virginia Tech defensive line coach J.C. Price at The Hotel Roanoke on Saturday. Game days don’t usually start this early, but with an 11 a.m. kick against Wofford, it was necessary.

“Coach Price actually came into my room at 6:30, beating on the door, throwing water on us trying to wake us up, make sure we’re ready,” Nelson said.

Wait, he literally threw water on you?

Virginia Tech was never in any danger of losing in a 27-7 victory over Wofford at Lane Stadium, but the Hokies (2-1, 1-0 ACC) also didn’t beat the brakes off an FCS opponent who came into the game having not scored in their first two contests.

The Hokies out-gained the Terriers (0-3) by a 475-199 margin but bogged down in opposing territory a lot early on. They threw the ball well, spreading it to a bunch of receivers, but were underwhelming on the ground, averaging just 3.2 yards per rush.

“I thought we were able to move the ball and stay on schedule better, and that was certainly a point of contention,” head coach Brent Pry said. “We converted better on third down, we had some long, extended drives. We just weren’t as good in the red zone as you wanted. We kicked the ball well, but I’d like to score touchdowns.”

Defensively, Tech was sharp again, though a deep ball late set up a touchdown that spoiled what would have been the Hokies’ first shutout since 2019. Wofford’s touchdown, a 3-yard run by Nate Walker in the fourth quarter, was its first points in 12 quarters this season.

“I’d be lying if I said it didn’t (bother me),” Pry said. “We talked in the locker room. The standard’s the standard. When you go in that game, you’re representing everybody. You’ve got to preserve the shutout when you have a chance to do that.”

Here are a few takeaways from a tune-up win against an FCS opponent ahead of what’s expected to be a thrilling Thursday-nighter against West Virginia this week:

Virginia Tech got its best game yet out of Grant Wells, who completed 26 of 35 passes for 314 yards and two touchdowns. He didn’t turn it over once.

“I think that’s a closer example of who Grant is,” Pry said. “If he gets just a little bit of time, he can really read that thing and read throws and be accurate. So I think that’s a good building block for him.”

The Hokies’ offensive attack relied on a lot of quick passes Saturday, to a variety of receivers. Nine players caught passes from Wells. At halftime, eight players had 10 or more yards.

“I have confidence in every guy in there and that doesn’t really surprise me,” Wells said.

Wells tossed two touchdowns, an 11-yarder to Jadan Blue that gave the Hokies a 20-0 halftime lead and a 27-yarder late to freshman running back Bryce Duke on a wheel route in which Wells dropped it perfectly into Duke’s arms on the move.

“That’s one of the weird timing routes that are different with every back,” Wells said. “I knew I had a chance in there. He can scoot a little bit and he has the ability to track down some balls, and that’s something we’ve worked on all camp and all week, so I was proud of that one.”

“When I see that played called … I’m like, ‘Oh yeah, I’m taking this one to the house,’” said Duke, who scored his first career touchdown. “And that’s what happened.”

Now that’s a dime on the wheel route 🎯 @HokiesFB pic.twitter.com/EcI2HkWQgK

That so many receivers caught passes is a positive sign for a Hokies offense that’s struggled with depth there for a handful of years. Two players in particular had encouraging showings: Blue and Christian Moss.

Blue, a Temple transfer, had been dealing with a knee injury that slowed him in August and had one catch for negative-three yards in the first two games. He had four catches for 61 yards Saturday, including some impressive snags.

He went up high on to reel in a 29-yarder on a third-and-19 in the second quarter, maintaining possession as he came crashing to the ground. Later that quarter, he dragged a toe near the sideline on a catch for 15 yards and another first down, not long before his touchdown grab.

“It does a lot for confidence because it’s been a while, honestly, since I’ve been able to make catches like that,” Blue said. “When I transferred here, I was struggling with a lot regarding our quarterback situation back at Temple. So me being able to come here and have somebody that’s able to deliver balls like that, you know, Grant’s been doing an excellent job.

“I take the credit too, but I’m not even going to lie, those balls are something that I was very excited to see, on behalf of him putting that trust in me to make those plays.”

Moss, a redshirt freshman who Pry said earlier this week was among a group of receivers who were trending up, had the first five catches of his career for 50 yards. He too made an outstretched catch on the sideline while dragging his foot.

“He’s got really good abilities,” Pry said. “He’s long. He’s kind of slinky. He catches the ball well. It’s a matter of just growing up and mastering your craft and really diving into this thing. He’s taken a big step.” 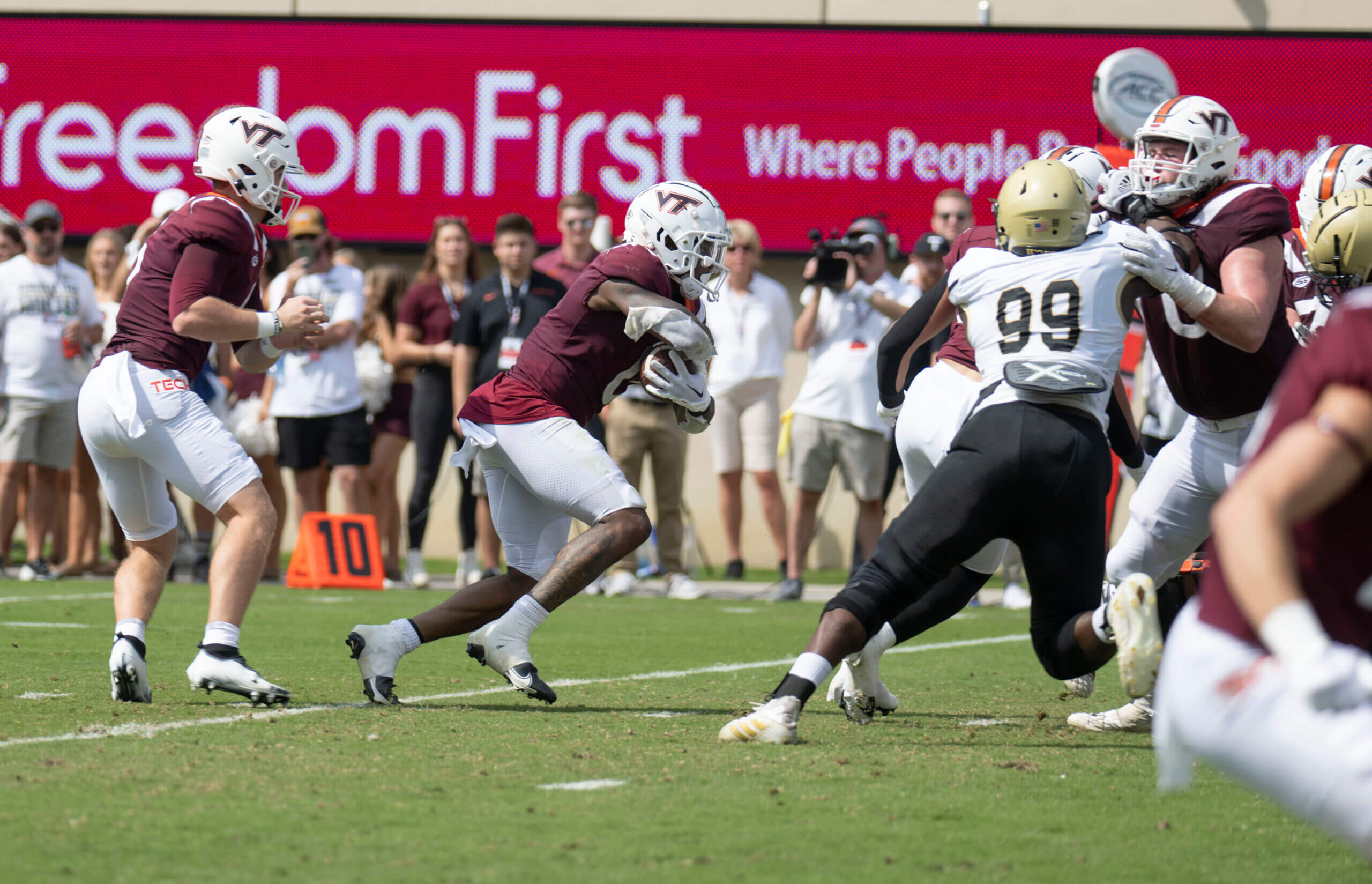 Despite success passing the ball, the Hokies didn’t overwhelm the Terriers on the ground like they hoped. With Malachi Thomas and Keshawn King held out, Tech ran for 133 yards on 41 carries.

The Hokies weren’t sharp in short-yardage, especially early. Jalen Holston got stuffed on a fourth-and-1 on Tech’s first drive when a Wofford defender came through unblocked and hit him in the backfield.

Holston finished with 66 yards and a 4.1-yard average, with Chance Black adding 45 yards and Duke 25.

But it was the Hokies’ second consecutive game of averaging 3.2 yards per carry (the opener, at 3.5, is misleading because of the bad field goal snap for a huge loss). And while most position groups got extensive work for their backups in the blowout, Tech kept almost its entire first-team offensive line in the whole game, with Bob Schick filling in at left tackle for an injured Silas Dzansi.

“We’re trying to get to a place with those guys” Pry said. “I know coach (Joe) Rudolph feels that way, and honestly, offensive line coaches always act begrudgingly with subbing. It’s about those guys playing together and feeling confident and finding the right run plays. All of that’s really, really valuable right now for us.”

It was another solid showing for the Hokies’ defense, which gave up only 199 yards, the second game in a row it held an opponent to under 200 yards.

Tech sacked Wofford quarterback Jimmy Weirick three times, with C.J. McCray, Nelson and cornerback Brion Murray getting in the backfield. The Hokies, who came into the game with the nation’s fourth-ranked rushing defense, allowing 44 yards per game, actually improved their average by giving up just 38 rushing yards Saturday.

They did so while subbing in liberally. Pry estimated that the regular defense played about a half’s worth of football.

“We didn’t want a four-quarter game,” he said.

Wofford’s points came against a group of backups late. The big play that set it up was a 47-yard pass to Landon Parker after Weirick got free on a scramble. Parker shook cornerback DJ Harvey and got behind the defense.

“It was a scramble situation, and our guys are taught to plaster to their people and their zones, plaster to their man, and we didn’t do that,” Pry said. “So that’ll be a good learning opportunity.”

The Hokies were especially careful with anybody who was dinged up heading into the game, not wanting to take any risks with West Virginia coming up in a short week. King, who left the BC game early last week with an injury, dressed but did not play.

“We went all the way to today with Keshawn,” Pry said. “And he just couldn’t get to full speed. I can sit there and go yeah, he looked pretty good at 90 percent, but I don’t want to do that to him.”

Defensive linemen TyJuan Garbutt and Josh Fuga both did not dress, a decision made Friday. Garbutt, who starred last week, was in a walking boot on the sideline.

The Hokies saw two key pieces go down Saturday, however. Kaleb Smith, who caught two passes for 36 yards, left just before halftime and did not return, the second time in three games he’s had to leave early.

“We’re not sure what it is,” Pry said. “He seems to be OK. They did X-rays, everything checked out, but they’re going to do a little further dive on him. But talking to him at the end of the game there, he seemed pretty good.”

Tech also played the last quarter and a half without Dzansi, who got rolled up on at the end of a running play. Pry said he’s “fine” and could have returned if needed.