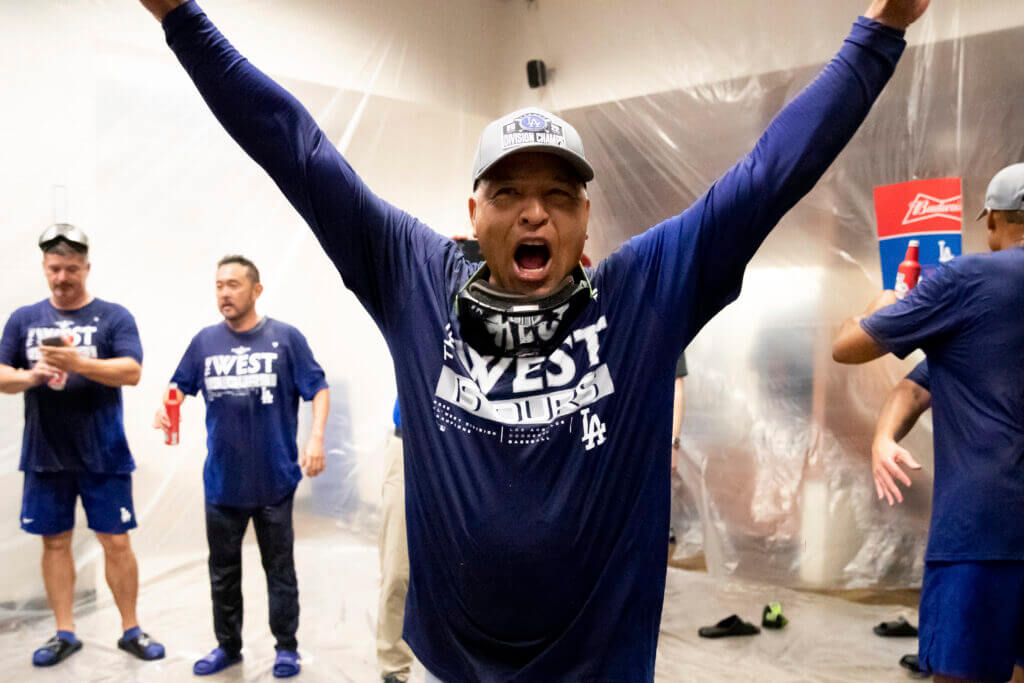 PHOENIX — Once the music stopped and the concoction of cold liquid started to pool into little rivers along the plastic lining protecting the Chase Field visiting clubhouse, the reality of the calendar set in.

“I don’t think you envision winning a division title with three weeks to go,” Freddie Freeman said Tuesday night, having already ditched the soppy wet commemorative T-shirt and hat during the festivities celebrating the Dodgers clinching the National League West for the ninth time in 10 years.

Ostensibly, it was a crown that could’ve been handed out months prior. Freeman’s arrival this March came with grander visions than reclaiming a division title after the winningest second-place finish in baseball history last October or making it a decade straight of postseason berths. Each move that preceded and followed Freeman’s acquisition has centered around pursuing another World Series title.

With 20 games to go and only arbitrary milestones remaining — securing baseball’s top record and setting a record for wins feels close to a foregone conclusion — that’s still the lens in front of each new development.

Here is what’s worth monitoring over the final three weeks:

This won’t be an orthodox pitching staff in October

This has been the case for a while, even before Tony Gonsolin went down with a forearm issue. Julio Urías will likely be the man on the mound for the Dodgers for Game 1 of the NLDS. Clayton Kershaw, should his back stay healthy enough, will likely start Game 2. After that? It gets a little wonky.

Tyler Anderson has pitched well enough to likely start a postseason game. His ability to go deep into starts and work around contact has fueled the best season of his career, but there are some concerns about his ability to miss enough bats. The Dodgers noted how well Anderson adapted to a swingman role early in the season, and one could posit that long relief would be his best for the postseason, depending on matchups.

Dustin May is no slam dunk for full-fledged starts in October given how he’s tried to find a consistent feel for his command. That’s a natural stage during post-Tommy John surgery recovery. His comeback from that procedure makes him an unlikely fit for relief. But the combination of what will likely be shorter starts and the Dodgers’ need for innings could make piggybacks (maybe with Anderson, maybe Andrew Heaney, maybe Gonsolin if he’s not able to fully stretch out) a possibility to take down a game, too.

“It’s about winning a baseball game, winning a series, preventing runs, scoring runs,” manager Dave Roberts said. “So however we can do that — whether it’s a little bit more creative or not normal, I don’t think we’re concerned about it. Nor are our players.”

That pitching outlook will depend on health …

“Getting a few guys back is certainly part of figuring out how the puzzle works,” Roberts said Wednesday, elaborating on the tenuous state of the Dodgers’ pitching staff.

Gonsolin’s return would be a good starting point. The All-Star right-hander threw an “encouraging” bullpen session on Wednesday, Roberts said, but the manager remained noncommittal about Gonsolin’s ability to come back as a full-fledged starter in October.

“Kind of the theme of our pitching staff as we look out is having the sum be better than the individual parts in the sense of getting 27 outs in games in a postseason,” Roberts said. “So I don’t know how it will look like for Tony as far as potential buildup or workload. But I do feel he’s going to be able to contribute in some capacity, which I know is important to him. … Everything is on the table.”

The rest of that bullpen picture is incomplete, with much to be determined over these final weeks.

Blake Treinen threw off a mound Wednesday and could face hitters soon, but even if he comes back fully healthy he won’t be used in the multi-inning role the Dodgers envisioned for him back in spring training. Brusdar Graterol threw a bullpen session Wednesday as well but has missed time with shoulder and elbow trouble in the second half. What was supposed to be a minimal stint on the injured list for Yency Almonte has progressed only to facing hitters on Wednesday after more than a month on the injured list. David Price should return over the final weeks of the season from a wrist issue, as well. Chris Martin has avoided a stint on the injured list but dealt with elbow trouble and a cramp in his leg over the last month.

The Dodgers already began easing up in how hard they push relievers thanks to the team’s sizable division lead. Now, they’ll be able to see who they can get back and right.

“Being able to lock down the division and set things up for the playoffs is going to be very helpful,” general manager Brandon Gomes said in the midst of the clubhouse celebration.

Some of that is already starting. Tommy Kahnle had been limited to four appearances over the last three seasons with elbow and forearm trouble, including just three games this year after Tommy John surgery. He never felt 100 percent in his rehab and had been on the shelf since May before the Dodgers activated him this week. But Kahnle said he finally feels back to his pre-surgery self, and his electric first outing back on Wednesday (a perfect inning with a pair of strikeouts and a fastball that sat at 97 mph) backed it up. Kahnle’s presence adds another arm with postseason experience, as well as the ability to handle both lefties and righties with a plus changeup.

“It’s really strange,” catcher Austin Barnes said of Kahnle’s pitch. “It really just kind of like knuckles at you and then just drops.”

… and so will the ninth inning

Craig Kimbrel will continue to close games for the Dodgers over the final few weeks of the season. But even after a strong start to September (15 consecutive retired batters before Wednesday’s blowup), it’s hard to imagine him being entrusted with critical innings in October. While Kimbrel has stabilized some of his overall strike-throwing, little has changed since the last time this subject was written about.

“If Craig continues to throw the baseball like has (recently), I have all the confidence that he’ll finish games for us,” Robert said after Wednesday’s blown save in a 5-3 loss to the Diamondbacks. “But, again, that’s contingent on what he’s been doing. He’s been striking the breaking ball and commanding the fastball. (Wednesday), it just wasn’t there for various reasons.”

Kimbrell’s ERA is still hovering above 4, and he’s missing fewer bats than at any point in his career. Much like in 2020, the Dodgers will enter October with no certainty about how they’re going to handle the ninth inning despite having an iconic closer on the roster. Can Kimbrell pitch his way into that form in the next three-plus weeks? Maybe. But this is a turnaround Los Angeles has been seeking since they acquired him.

The position player group should be set

Mostly. The Dodgers’ 13-man position player group in October will in all likelihood come from the 14 position players currently on the active roster (including Gavin Lux, who could return from a neck issue this weekend in San Francisco). That would leave the biggest intrigue to the final bench spot (which will likely be Hanser Alberto, but could be Miguel Vargas if he has a hot few weeks). There is also the question of who will work their way into the regular lineup against certain matchups. Chris Taylor, for one, has played better of late, striking out just four times through his first 23 plate appearances during this recent road trip and providing much more hard contact. Can the Dodgers tinker with Joey Gallo to get his swing in the right place to be a threat in October? What version of Cody Bellinger will they get? A matter of a few hot weeks in September could change how people view October.