BLACKSBURG, Va. — We’ve reached the quarter pole of the season, with Virginia Tech posting a 2-1 record that would have probably been expected by most of the fan base at this point, even if it took an unusual path to it.

The Hokies did what they needed to in a 27-7 win against Wofford on Saturday, though it’s not a result that’ll infuse the fan base with an overabundance of confidence, particularly offensively, as the team heads into a tougher stretch of the schedule.

As West Virginia looms on Thursday, the warm-up phase of the season is over. It’s time to find out what this team is made of.

Here are five thoughts on the Hokies after a tune-up win against Wofford:

This is not to confuse the Hokies’ performance with their past few against FCS teams under Justin Fuente, when the actual result of the game was in doubt. That wasn’t the case Saturday. Tech led 20-0 at halftime and Wofford probably wouldn’t have scored 20 points if these teams played 12 quarters, let alone four. Virginia Tech was in no danger of losing.

But this wasn’t a good ol’ fashioned squashing, which used to be the case in these FCS games. The last time Tech did that was a 62-17 blowout against William & Mary in 2018, a game so lopsided that two quarterbacks played significant time, nine Hokies got carries and practically everyone who dressed on defense got some snaps. 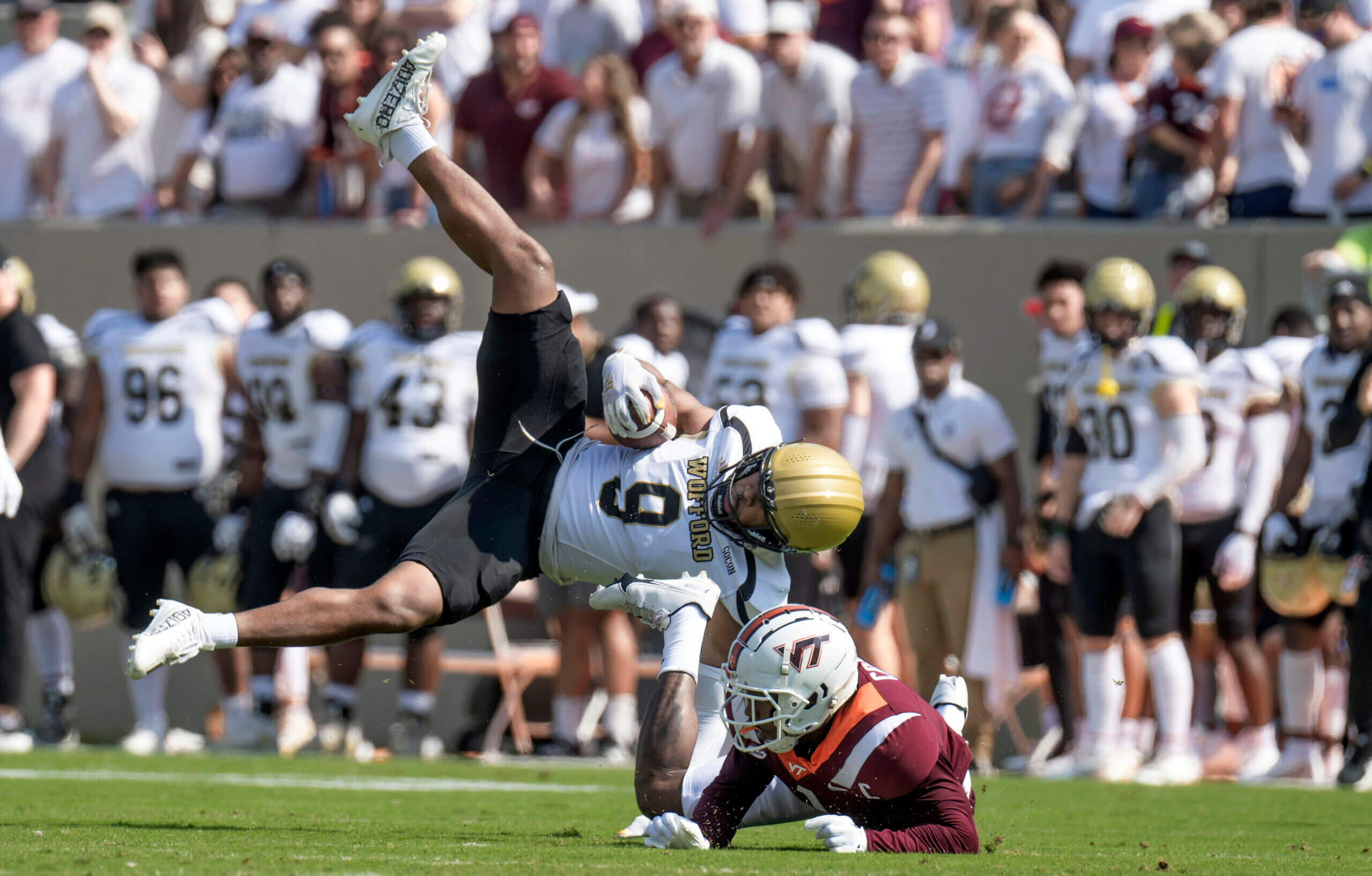 That used to be the norm around here. Here are the scores in the FCS games going backward from 2015: 42-3, 34-9, 45-3, 42-7 and 66-13. (Diehard Hokies fans will notice where I stopped.) Those games were essentially Tech picking its score. Once the offense had gotten enough work, the coaches could call off the dogs at any point and get the backups some reps.

The Hokies didn’t do that Saturday, as they were stuck on 20 points until early in the fourth quarter. Backup quarterback Jason Brown got only one series. Tech didn’t swap out anybody on the offensive line other than out of necessity when Silas Dzansi went down. Defensively, the Hokies did a little, but overall, Virginia Tech didn’t clear the bench.

It’s probably a sign of where the program is right now and has been the past few years, but it’d be nice for Hokies fans to watch their team play a team from a lower level and just dominate from start to finish again.

2. Tech is going to need more out of the running game.

Part of that non-domination had to do with a ground game that didn’t necessarily impress. Big disclaimer: The Hokies were without both Malachi Thomas and Keshawn King at tailback, then lost Dzansi in the third quarter. This wasn’t a full deck they were playing with. But should that have mattered?

The Hokies ran 41 times for 133 yards, a 3.2-yard average. That’s not bad — look over to the other side of the field and Wofford’s 1.6 yards per rush to see a team that really struggled to move the ball — but it’s also not great.

That’s two consecutive games in which the Hokies haven’t gotten things rolling on the ground, outside of King’s 65-yard touchdown run against Boston College. They’re 108th nationally, averaging 3.3 yards per carry (though without the 54-yard loss on the bad field goal snap at ODU, it’s at a still-not-great 3.76, which would be 91st). There’s a reason why the Hokies kept nearly their entire starting O-line out there at the end of Saturday’s game: The group needed the work together.

A more dynamic running back might make things look better. There were a couple of runs Saturday by Jalen Holston {that a} more explosive back like King might have taken to the house. That makes the whole operation look better. While Holston is the most complete back in terms of blocking and other little things, I have to think his carries will — or at least should — diminish once Thomas is healthy, given what King’s showed so far this year.

But the key will be the O-line. Even great backs can’t churn out much yardage without holes to run through. So far the run blocking has been adequate. It’s going to need to be better for this offense to thrive.

3. More receivers stepping up is a positive sign. We’ll see if it holds.

Brent Pry spoke glowingly about that second wave of receivers this week on his radio show, saying that players like Stephen Gosnell, Jadan Blue and Christian Moss were trending. They backed that up Saturday.

That trio caught 12 passes for 154 yards and a touchdown, deepening Virginia Tech’s receiver pool for once and allowing quarterback Grant Wells to scan the field rather than have to lock on to one guy.

That’s been an issue for the Hokies in recent times. Only a handful of receivers have been trusted to run active routes. And it looked early this year like that might be the case again, with only Kaleb Smith and, at times, Da’Wain Lofton, getting open.

With the caveat that it came against an FCS opponent, that wasn’t the case Saturday. Moss’ five receptions were the first of his career, a nice breakout. Blue had an emotionally and physically draining offseason, with the tragic death of his father and a knee injury. To see him get into the end zone and make some of the acrobatic catches he did was nice. Gosnell has started the past two games and has at least two catches in all three contests.

But will it continue? A lot of receivers can look good against lower-level competition. Can they get open against better defenses? They couldn’t all that much against ODU and Boston College. That was part of the reason Wells’ numbers didn’t look so hot.

And if Smith continues to have to fight through whatever injury ailments he’s having, it adds that much more importance to these receivers stepping up. Right now, Tech seems like it has pretty good pass targets in Smith, Lofton and tight ends Nick Gallo and Connor Blumrick, who have been productive. If Gosnell, Blue and Moss continue to progress, that’s suddenly a much deeper and more threatening group that could prevent defenses from homing in on one guy.

4. The defense is just plain solid, but we won’t know how good it is for sure until this upcoming stretch.

I keep citing these national stats on Virginia Tech’s defense because they’re very good. The Hokies are fifth nationally in yards allowed per game(202), fourth in yards per play (3.51), third in rushing defense (42 yards per game), third in third downs (17.1 percent), 18th in sacks (nine) and on and on.

Saturday was no exception to the Hokies’ fast start. Though Wofford scored its first points of the year against Tech’s backups, it still didn’t break 200 yards and couldn’t do anything on the ground.

Now the cold water: None of these offenses Tech has played has been very good. Boston College ranks 115th in the FBS in total offense, while ODU is 121st. Wofford ranks third to last in the FCS. So this has not been a Murderers’ Row of offenses.

And the ones coming up on the schedule are pretty good. West Virginia is 14th in the country in yards, having just pasted Towson 65-7. Even in its losses, it wasn’t the offense that faltered. The Mountaineers are averaging 46 points per game. North Carolina’s even better at 51.3.

On the flip side, it’s safe to say neither of those teams has faced a defense like the Hokies. And while the competition hasn’t been a great way to judge how big of strides Tech has made on that side of the ball, your eyes are. This is a team that stuffs gaps, that rallies to the ball, that gets after the quarterback, that tackles soundly and that hits. We can parse the stats all we want, but anyone who has watched this group in recent years knows improvement when he or she sees it.

That won’t be verifiable, though, until the opposition on the other side of the ball is more formidable. To find that out, the Hokies won’t have to wait much longer.

5. The bumps and bruises Saturday show how just fragile the roster stability is.

Two players went down at different points against Wofford, and they were big ones.

Smith had to leave before halftime for reasons that haven’t been specified. He appeared to be holding his collarbone after landing awkwardly on the long pass that drew an interference flag. Pry said X-rays were negative but they’ll do more tests. That’s on top of what was reported by the ACC Network as a rib injury against ODU and some knee troubles against Boston College.

At the end of the third quarter, Dzansi went down after a running play, having to limp off with what looked like a knee or ankle injury after the trainers came out. Pry said Dzansi could have returned if he had to.

Those are two fairly significant players at key positions for the Hokies, a pair of team captains who happen to play important positions that don’t have a ton of depth.

Even with the injuries that have kept him completely out for 2 ½ quarters this year, Smith leads the team with 131 receiving yards. Only Gallo has more receptions than his eight.

Bob Schick replaced Dzansi — somewhat surprisingly, because freshman Xavier Chaplin has worked behind him at practice — and was fine in the quarter of action he got, though again, it’s not like the offense had things cranked up.

Those are two players the Hokies can’t afford to have out for long. You can spread the wealth at receiver against the FCS opponent, but Smith is the one proven field-stretcher on the roster. And while Schick was OK in limited action (and the only backup Joe Rudolph has gotten in a game all season), they’ll need Dzansi watching out for Wells’ blind side as the competition ramps up.

The roster has held up so far, but it doesn’t take much on the injury front for there to be big concerns.