Will Pirates prospect Endy Rodriguez win the race to MLB after a red-hot summer season?

ALTOONA, Pa. — After a sizzling summer, has catcher Endy Rodriguez surged ahead of Henry Davis on the Pirates’ internal depth chart?

Davis was the top pick in the 2021 MLB Draft, but his development has been stymied by injuries, including a broken wrist after being hit by a pitch. Rodriguez wasn’t exactly an understudy at the start of the season — Davis and Rodriguez were sort of the 1A/1B catchers at High-A Greensboro — but he blossomed when he got behind the plate more frequently in Davis’ absence. Since coming off the injured list a couple of weeks ago, Davis has added a new wrinkle, playing two games in the outfield.

Who’ll win the race and get to the majors first? If Rodriguez makes a quick appearance with the Pirates in the final week of this season, would that signal he’s cemented as the club’s top catching prospect?

Minor-league catching coordinator Chad Noble grinned and did not take the bait.

“Let’s flip the script and say Endy got hit (by a pitch) that day and Henry kept going,” Noble said. “We could very well be talking about Endy having struggles at the plate and all this stuff. So that’s a hard question.

“As far as Endy being ahead of Henry, I don’t see it that way. They’re so different in the ways they do everything that it’s hard to even compare them.”

Rodriguez entered this season hoping just to move up one level in the farm system. He got his wish six weeks ago when he was promoted to Double-A Altoona.

Rodriguez, 22, has been as electric with Altoona as he was at Greensboro. After having the best summer of all the Pirates prospects, he upgraded his plans.

“I want to play in big leagues this year,” Rodriguez said. “My goal at the beginning of the season was to play (in Double A). Now, I need to go up. That’s my new goal. That’s why I always play hard. When we play hard, we can make something happen.” 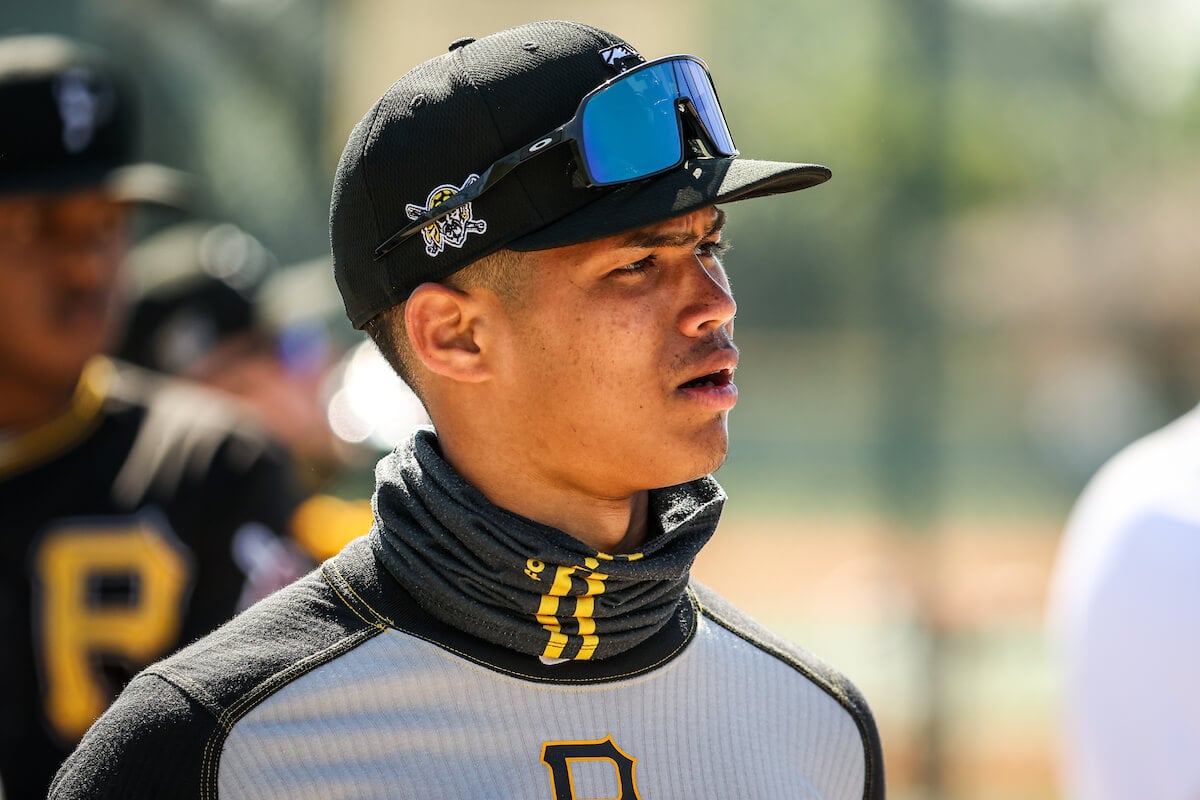 Rodriguez did not play Sunday in Altoona’s season finale. He likely is headed to Triple-A Indianapolis, which has 10 games remaining.

“I tell Endy all the time, ‘Keep doing your thing and soon you’ll be in Indy,’” Noble said. “He always goes, ‘I don’t want to go to Indy. I want to go to Pittsburgh.’ Endy would fit right in (with the Pirates). He’d walk in and not even be perceived as a rookie. They’d just be like, ‘Let’s go, man.’”

It’s possible Rodriguez will make a cameo appearance before the Pirates wrap up their season on Oct. 5. Last year, shortstop Oneil Cruz went from Altoona to Indy, then played two major-league games in the final week of the season.

Rodriguez must be placed on the Pirates’ 40-man roster this offseason to shield him from the Rule 5 draft. The Pirates already have two open spots on their 40-man. Management might opt to make the move in a couple of weeks and give Rodriguez a taste of the big leagues.

“It wouldn’t surprise me because I’ve had a really good year and they know I can help the team,” said Rodriguez, who recently moved into the final spot on Baseball America’s Top 100 list.

Rodriguez batted a combined .317/.406/.580 with 24 homers this season. His bat stayed hot after making the jump to Double A, even though the pitchers had better stuff and changed how they attacked him.

“Last night, I saw only two fastballs, both coming out of the (setting) sun. Everything else was a curveball or changeup,” Rodriguez said, shaking his head. “They know I can hit.”

In a couple of weeks, Davis will head to the Arizona Fall League. Rodriguez plans to play for Estrellas Orientales of the Dominican Winter League, which will open its season in mid-October.

Davis, 22, appeared in just 59 games this season, the result of being plunked on the wrist in his last game with Greensboro. Sunday, he notched his 20th hit-by-pitch in his final plate appearance with Altoona.

Rodriguez has made 70 starts at catcher, 16 at second base and 12 in left field. It wasn’t until Davis suffered a non-displaced fracture in his left wrist that Rodriguez became an everyday catcher.

“(Rodriguez) has the athleticism and all the tools,” an evaluator from another club said. “I love his enthusiasm. I love his swing. He just needs to catch more. The versatility is nice, but I’d get him behind the plate every day.”

The Pirates have walked a tightrope to develop their two prodigious catchers this year at the same levels of the system. It’s been a challenge for Noble, a former Cubs bullpen catcher whom the Pirates hired as a coordinator in January.

“You can get in trouble when you focus solely on one guy, even if he is ‘the guy,’” Noble said. “My goal is not for them to be, like, C1 and C2 (first string and second string) in the big leagues. I want them to be equal contributors because they bring so many really good things. They catch differently, they hit differently, but they’re both really productive.” 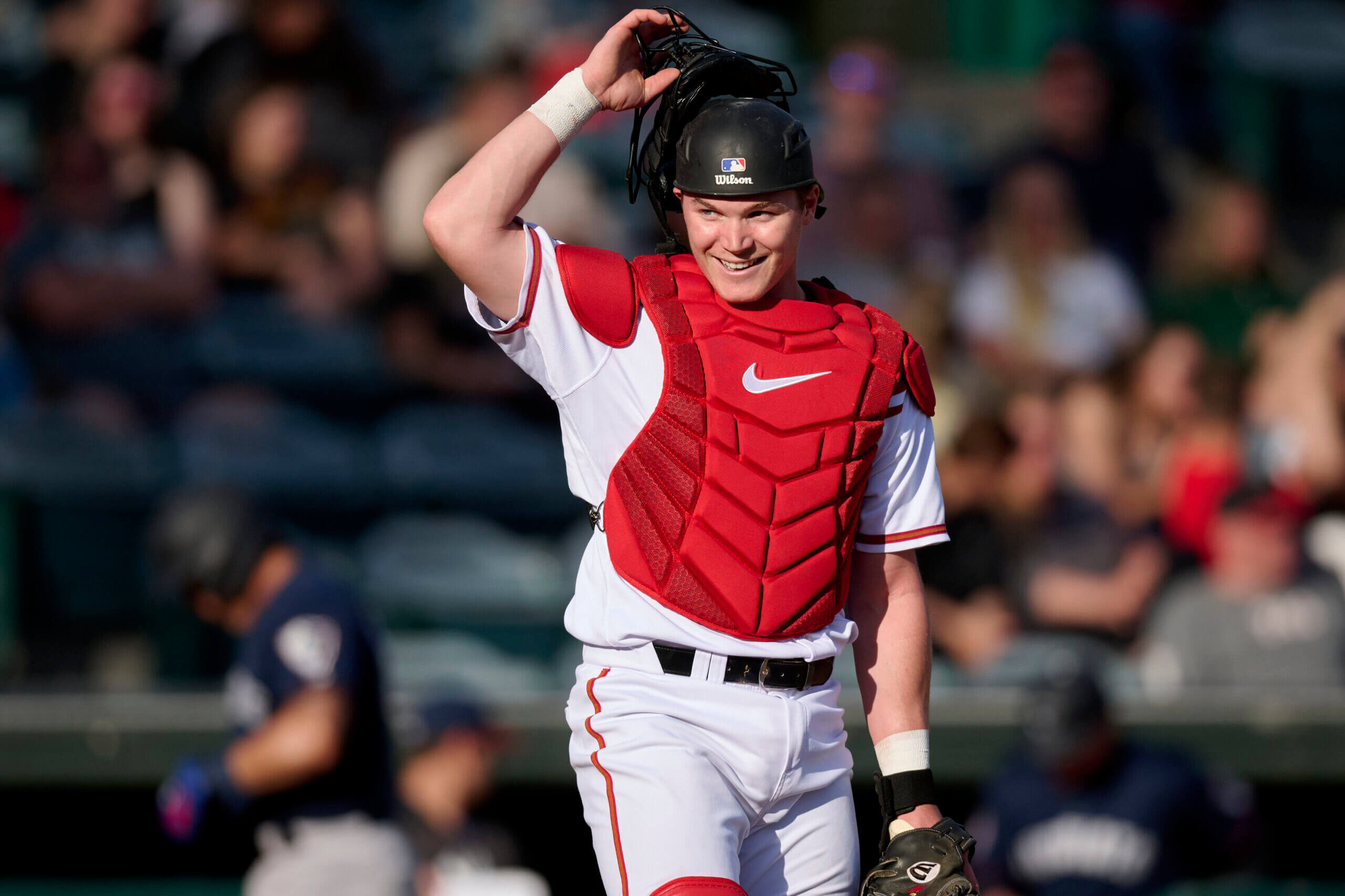 Henry Davis was limited to 59 games this season because of injuries. (Mike Janes / Four Seam Images via Associated Press)

Davis has a stoic catching style. In college, he set up with his left knee on the dirt. The Pirates switched it to his right knee down because it made Davis a better blocker and thrower.

Rodriguez has what Noble calls a “flowy” style. He also uses a one-knee-down set-up, but frequently switches knees, sometimes from pitch to pitch in an at-bat. Rodriguez also is able to get lower to the ground than Davis.

Davis has a no-nonsense Type A personality, and it shows when he makes a mound visit. “He’ll go out there and be like, ‘I’ve done my homework. I’ve got you,’” Noble said. “Endy is like, ‘Come on, man, let’s go! Let’s have fun!’ Two different styles and both are very effective.”

Early in the season, a scout noticed that Rodriguez seemed tentative during his mound visits. When the scout checked in again a couple of months later, Rodriguez was more in charge on the field.

Noble pointed out that Rodriguez took a huge step forward after Davis went to Altoona and Rodriguez took on full-time catching duties with Greensboro.

“Endy started really immersing himself in catching,” Noble said. “I think that really gave him the idea of, ‘Hey, these guys are throwing to me every day. They have more trust in me now because I’m playing more.’ That freed him up to become the kind of game manager we need.”