Home NEWS Wisconsin routs New Mexico State: What did we learn about Badgers ahead of Ohio State?

Wisconsin routs New Mexico State: What did we learn about Badgers ahead of Ohio State?

MADISON, Wis. — By the time Wisconsin running back Braelon Allen waltzed untouched into the end zone just 90 seconds into the game, there should have been a pretty clear understanding of what to expect Saturday afternoon at Camp Randall Stadium.

One team was seeking payback, the other a payout. And it showed.

Wisconsin obliterated New Mexico State 66-7 in a game that offered little in the way of significant competition — or any competition at all, really — as the Badgers manhandled an overmatched opponent one week after they suffered a humbling upset loss to Washington State. In exchange, New Mexico State accepted $1.4 million from the game contract to prop up its athletic department and serve as a sacrificial lamb.

This was what you call a get-right game for Wisconsin (2-1) against a New Mexico State team (0-3) that had produced exactly one winning season in the past 19 years and entered the day with one of the worst offenses in college football. Wisconsin’s 59-point margin of victory was its largest since shutting out Central Michigan 61-0 in 2019. The Badgers racked up 595 yards of total offense and scored six rushing touchdowns for the first time since tallying seven during a 2014 game against Nebraska.

The outcome was far from a surprise. So did we learn anything meaningful about the Badgers as they get set to embark on a massive Big Ten opener at undefeated Ohio State next Saturday?

Here are some key takeaways: 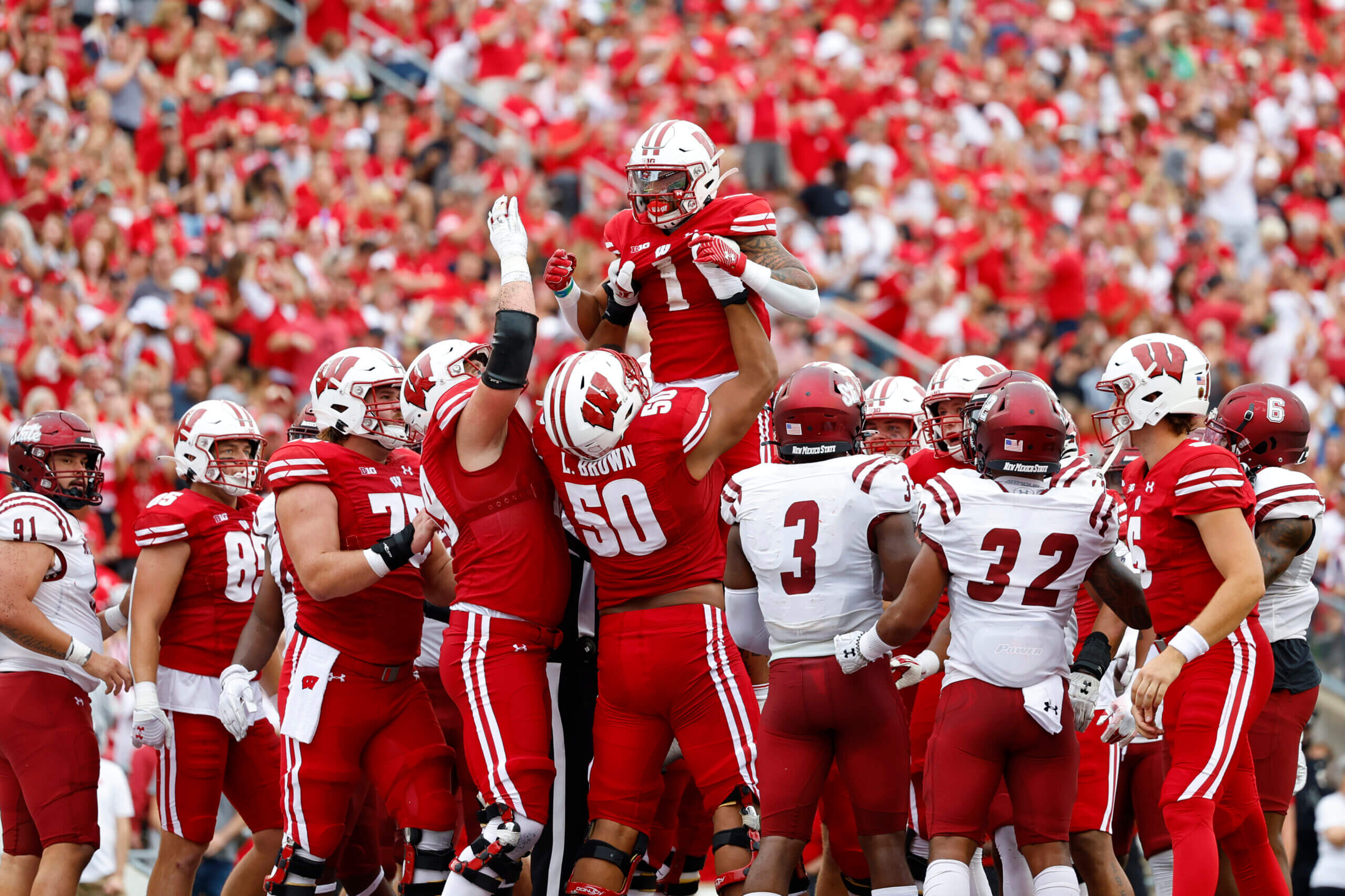 Wisconsin scored its most points since 2014 against Bowling Green. (Jeff Hanisch / USA Today)

Running game, O-line imposed their will

On Monday, school officials made three Wisconsin offensive linemen — left tackle Jack Nelson, center Joe Tippmann and right guard Michael Furtney — available to reporters as part of a group because so many people had requested to speak to them during the team’s weekly in-season media availability. The reasons, as they understood, weren’t particularly flattering. Wisconsin had committed 11 penalties against Washington State for 106 yards, with five of those penalties attributed to the offensive line.

As the questions persisted about how the line was jelling together, whether the group was generating enough vertical push and why players lapsed into so many mistakes, Nelson looked as though he would’ve rather been undergoing a root canal procedure.

“It’s super frustrating,” he said then. “I’m sure everyone can imagine what that feels like. It’s extremely frustrating.”

Wisconsin’s offensive line generally played with an edge Saturday that helped to open holes, leading to several big runs from the Badgers’ tailbacks. Although Tippmann was flagged for a holding penalty that negated a 24-yard Allen run in the second quarter — Tippmann’s third holding flag in the past two games — the line played a much cleaner game.

One change to the line involved inserting Tanor Bortolini at right guard for Furtney and Trey Wedig at right tackle for Logan Brown during a stretch in the first half that helped lead to four consecutive scoring drives. Bortolini, one of the team’s most versatile linemen, said he tore his meniscus and some cartilage behind one of his kneecaps during fall camp, which had sidelined him early this season.

Allen and backup tailback Chez Mellusi were able to run free. Allen took the first three carries of the game, which culminated in a 39-yard touchdown run to open the scoring. He added first-half touchdowns on runs of 1 and 2 yards and finished the game with 15 carries for 86 yards and three touchdowns. Allen said he was pleased with the performance of the offense, which found strong balance with the passing attack.

“I think we just need to continue to play off of each other,” Allen said. “When the passing game is going like it was today, it’s being able to pick up our four or five yards on our carries just to be able to move the ball down the field and not rely on the pass game. And when we’re running the ball well, I think that we have to make completions that we’re supposed to, just keep drives alive, just continue to play off each other, be consistent in that way.”

Allen has been able to earn plenty of rest in two of the first three games — he carried 14 times for 148 yards with two touchdowns in the opener against Illinois State — which bodes well for keeping him healthy throughout the season. Mellusi, meanwhile, added 10 carries for 71 yards and a touchdown Saturday.

Third-string running back Isaac Guerendo earned the most extensive action of his career and took advantage of the opportunities. Guerendo carried 12 times for 74 yards with two touchdowns. His second touchdown was a 30-yard burst that gave Wisconsin a 63-0 lead.

Quarterback Graham Mertz wasn’t perfect Saturday. During the first half, he misfired on a pair of passes intended for an open Chimere Dike. He later was intercepted by New Mexico State defensive back Syrus Dumas, who stepped in front of receiver Skyler Bell with Wisconsin driving toward the end zone. Bell said the play was the result of a miscommunication.

But that’s about it on the nitpicking front for Mertz, who delivered several quality throws and continued to show how much improvement he has made in Year 3 as the starter. Mertz finished the game completing 12 of 15 passes for 251 yards with three touchdowns and one interception. His pass efficiency rating of 273.2 was the third-highest in program history (min. 15 attempts), trailing John Stocco (296.7 vs. Indiana in 2006) and Alex Hornibrook (277.4 vs. BYU in 2017) and slightly ahead of Mertz’s 273.0 in his 2020 starting debut against Illinois. Mertz tossed an 18-yard touchdown to receiver Keontez Lewis to give Wisconsin a 21-0 second-quarter lead and later found tight end Clay Cundiff down the field for a 47-yard completion.

“I’m proud of the response we had this week during practice,” Mertz said. “Guys were competing, having fun and really pushing each other to get better. You see that in the front seven, in the secondary, with our receivers, guys really competed this week and they pushed it to a different level. We’re going to keep doing that. We’re going to every week just try to get a little bit better. I’m excited to see where this team can go.”

Sure, the New Mexico State defense wasn’t exactly the ’85 Bears. Mertz threw a 49-yard touchdown to Bell in which Aggies strong safety Bryce Jackson appeared stuck in mud, taking the wrong angle as Bell ran wide open for Wisconsin to take a sizable 42-0 advantage in the third quarter. But Mertz consistently found his windows while having plenty of time to throw.

On Mertz’s final drive, he completed a 28-yard pass to Dike in the third quarter. Two plays later, he hooked up with Bell for an 18-yard touchdown in the front left corner of the end zone, beating two defensive backs in the process. Mertz now has gone three straight games to open the season with at least 200 yards passing. He finished with 200 yards passing in three games all of last season.

Another encouraging quarterback development for Wisconsin was the play of true freshman backup Myles Burkett. He replaced Mertz with 5:37 remaining in the third quarter and Wisconsin leading 49-0. Burkett connected with Dean Engram on a 37-yard completion in which Burkett was drilled as he threw and Engram came back for an underthrown ball. That drive ended with a Guerendo rushing touchdown and a 56-0 lead.

Quarterback Deacon Hill took the next drive on a series that went three-and-out. Burkett then re-entered the game and was in for two scoring drives. He threw a great ball to tight end Jaylan Franklin for a 21-yard completion near midfield in the fourth quarter. Burkett completed 4 of 5 passes for 84 yards. 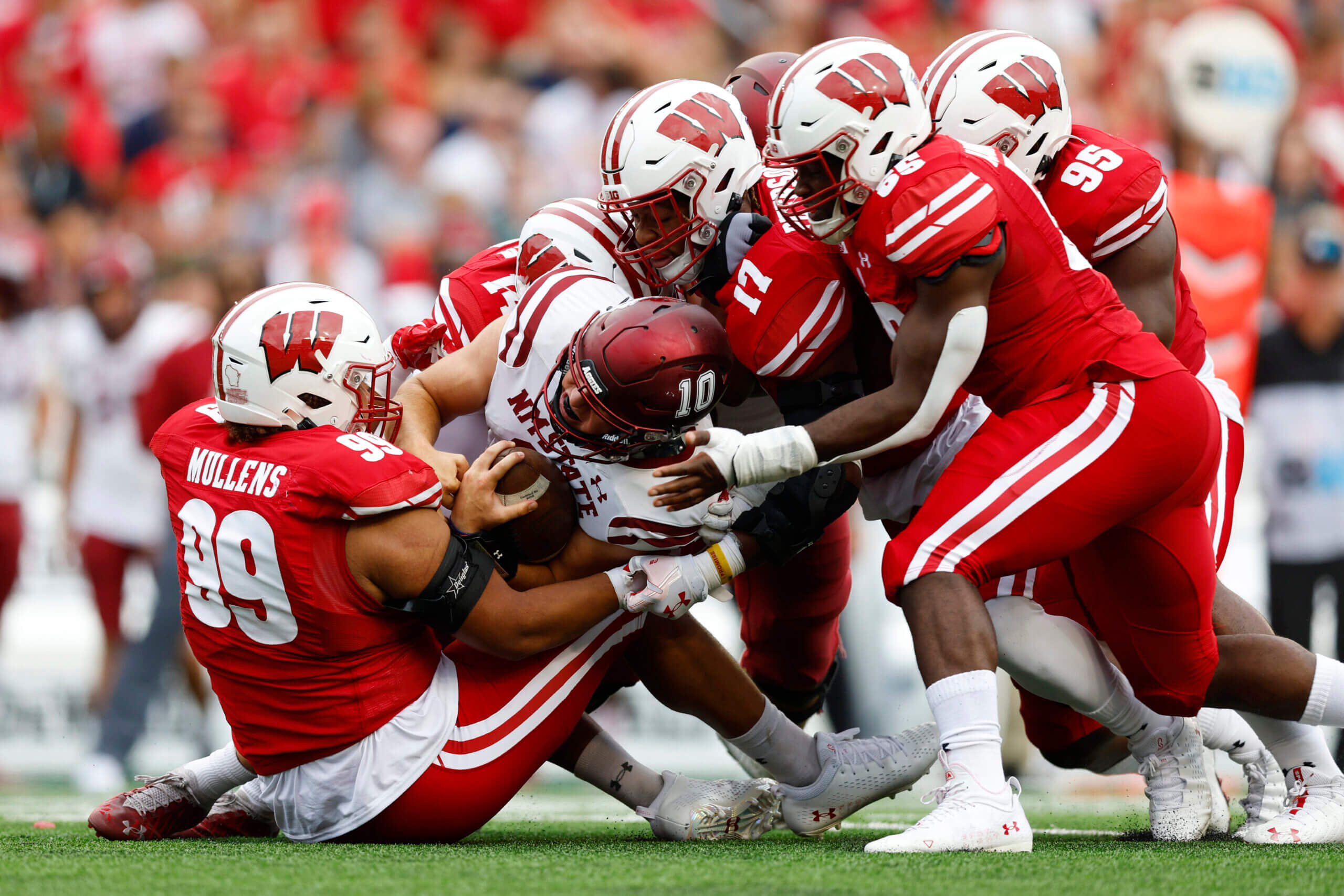 Defense lives up to billing against overmatched opponent

New Mexico State’s offense had been virtually nonexistent through its first two games. The Aggies entered Saturday ranking 130th nationally in total offense, 130th in scoring offense and 129th in team completion percentage, connecting on 42.3 percent of their passes. Not surprisingly, Wisconsin’s defense took advantage of those issues.

New Mexico State completed its first pass of the game for six yards. The next 10 passes of the first half were all incompletions. Although the Aggies strung together a lengthy drive just before halftime, spanning 13 plays and 82 yards, New Mexico State kicker Ethan Albertson missed a 29-yard field goal wide right with four seconds remaining.

Wisconsin picked off three passes in the game. Cornerback Ricardo Hallman made an impressive one-handed interception working one-on-one against receiver Kordell David during the first quarter. Inside linebacker Maema Njongmeta picked off a pass that bounced off the hands of running back Jamoni Jones and returned it six yards to the New Mexico State 2-yard line in the second quarter. Allen scored on a 1-yard touchdown two plays later to give Wisconsin a 28-0 advantage.

Even the reserves were in on the action. Cornerback Avyonne Jones played excellent coverage on receiver Chris Bellamy, who mishandled a pass that inside linebacker Jake Chaney intercepted at the New Mexico State 41-yard line. That play helped to set up Guerendo’s 30-yard touchdown run to give Wisconsin a 63-0 lead.

“I think we played amazing,” Hallman said. “We had a great week of practice first and then we translated everything to the game. It’s always hard coming off a loss, but I feel like we rebounded very well as a team as a whole. Our defense played really well today.”

Jones was beaten on a 36-yard completion to receiver Jordan Parker down to the 1-yard line to set up New Mexico State’s only score of the game. But the Badgers were relentless throughout. Wisconsin’s defense finished with eight tackles for loss, four pass breakups and five quarterback hurries. New Mexico State’s quarterbacks completed just 10 of 30 passes for 124 yards with no touchdowns and three interceptions.

Wisconsin did what it needed to do Saturday. Now comes the toughest test of the season in Columbus, Ohio.